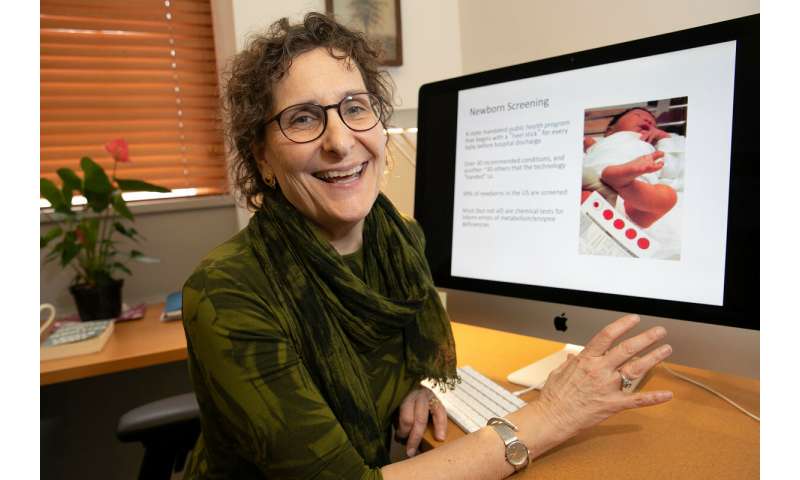 A few months ago, Lisa Diller saw a family for a consultation in her cancer clinic. Their story is one of tragedy, and of hope.

The mother had an eye removed out of medical necessity at the age of 2, but knew little about the details of her condition. Years later, her 2-year-old son developed a rare and aggressive form of cancer—retinoblastoma—that involves the uncontrolled growth of immature cells in the retina. By the age of 5 he was blind. The devastating disease in mother and son was caused by a genetic mutation in the RB1 tumor suppressor gene that, when unaffected, maintains normal cell division. The information proved invaluable for the family’s second child, whose blood DNA test revealed she too was a carrier of the malformed gene. Armed with that knowledge, doctors examined her eyes more regularly and treated her with laser therapy when small tumors appeared. Today she is 4 and has perfect vision.

“The test saved her sight because the doctors knew her DNA put her at risk and they were able to intervene,” said Diller, a pediatric oncologist, professor of pediatrics at Harvard Medical School, and the Lillian Gollay Knafel Fellow at the Radcliffe Institute for Advanced Study. “That’s the power of genetics. If we had known that their son carried that mutation, he might be able to see.”

Genetic tests that could help save a child’s eyesight or even life are the focus of Diller’s Radcliffe work. During her fellowship she is studying the implications of genetic testing in newborns, and planning research that focuses on testing babies for gene changes associated with cancers known to strike the very young, including retinoblastoma. “If we are going to use the genetic revolution to do something good,” said Diller, “it seems this is truly worth doing.”

Testing newborns’ blood for signs of disease is not new. For years doctors have screened babies for certain conditions that, if detected early, can be reversed or managed to avoid severe consequences. Newborns are typically tested for more than two dozen rare diseases, using biochemical tests that look for missing proteins or a buildup of byproducts when a certain pathway is malfunctioning, said Diller. But “they are not, generally speaking, direct DNA tests,” she added. “Genetic testing is relatively new and we are still learning how to use this testing to improve health. For cancer, it’s a predictor. It doesn’t tell you that you have cancer, it tells you that you might develop cancer.”

But for many, knowing about that risk can be unsettling. As anyone with a family history of cancer knows, facing and understanding one’s own frank numerical likelihood of the disease can be daunting. Adults regularly struggle when deciding whether to find out if they carry changes to certain chromosomes or genes that could increase their cancer risk, in part because of the anxiety the knowledge can trigger.

And when it comes to their children, many parents simply aren’t interested in the research.

BabySeq, a National Institutes of Health-funded project launched in 2015 and led by researchers at Brigham and Women’s Hospital and Boston Children’s Hospital, asked parents to take part in a study that would sequence more than 900 genes in healthy newborns. The goal was to arm parents with useful information that could help them consider future early medical interventions for their children if needed. But of the 3,860 eligible families identified, only 268 opted in. The report concluded that “low interest in research and study logistics were major initial barriers to postpartum enrollment and are likely generic to many postpartum research efforts.”

Diller suspects some parents were skeptical of “testing for everything because there might be something,” she said. She hopes her planned study will allay some of those concerns by focusing on a small number of cancer-risk genes. It will also try to address the complicated relationship many people have with risk.

“Your genes aren’t genies that can predict the future,” said Diller. “They can only tell you what your risk is in comparison to others who don’t have genetic mutation.”

To help participants better understand that risk, Diller and her collaborators plan to include detailed questionnaires that will ask parents why they do or don’t agree to participate in the study, if they understand what the research is trying to probe, and how they would feel about knowing about certain risks related to their child’s well-being. “We want to do this in a way that’s respectful to the participants,” she said, “and that eventually benefits the public health.”

Respecting her patients is paramount to Diller, who chose to become a pediatric cancer doctor because the children “keep you optimistic,” and the parents who “rise to the occasion when it comes to their sick children are inspiring.” Above all she said she likes developing a “highly trusting relationship” with mothers and fathers coping with critically ill children.