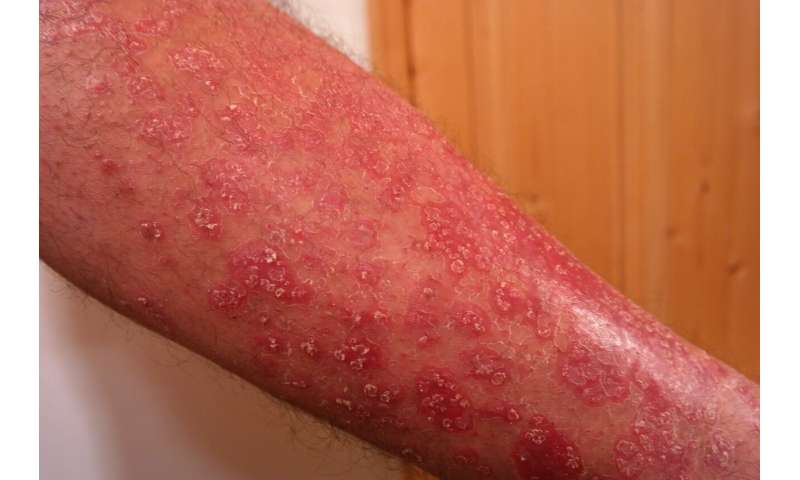 Studies have linked psoriasis and higher weight, but the causal relationship between the two has been unclear. What triggers what?

Or could other underlying reasons explain the connection?

“Higher BMI may contribute to increased inflammation of the skin, which can exacerbate psoriasis, but it could also be that psoriasis leads to a person being less physically active and thus gaining weight,” explains Mari Løset.

She is a medical doctor at the Department of Dermatology at St. Olavs Hospital and a postdoctoral fellow at the Norwegian University of Science and Technology’s (NTNU) K.G. Jebsen Center for Genetic Epidemiology.

Løset is part of a team that been involved in a study of the causal relationship between BMI and psoriasis.

BMI stands for body mass index and is a measure of body fat content. It is calculated from a person’s height and weight.

The observational study is a large collaboration among researchers from NTNU, England and North America. Some of the data being used are from the Health Survey in Nord-Trøndelag (HUNT) and the UK Biobank. Together, the analyses include data from 750 000 individuals.

Psoriasis is a chronic inflammatory condition of the skin, which causes a red, scaly rash. The cause of the disorder is probably multifactorial, involving both heredity and the environment.

Worldwide, two to four per cent of the population is affected by psoriasis. The incidence is particularly high in Norway.

“Self-reported data from two large population surveys in Norway indicate that six to eleven per cent of the population may be affected in this country,” says Løset.

“Similar studies from other parts of the world substantiate the fact that the condition is increasing,” says the postdoctoral fellow.

To investigate the causal relationship between BMI and psoriasis, the researchers used a method called Mendelian randomization. It is named after Gregor Mendel, who is known as the father of genetics.

According to Mendel’s principles of inheritance, whether we inherit a certain variant of genes from our mother or our father is random. Genetic variants are randomly distributed, or randomized, between individuals.

“Mendelian randomization means that nature itself distributes individuals randomly into groups based on genes. This way, we can avoid the results being influenced by external factors,” says Løset.

“Our understanding of how genes are related to disease is increasing at record speed, and in this study we used known genetic variants as markers for BMI and psoriasis,” she adds.

By using Mendelian randomization, the researchers found that higher weight is a contributing factor to psoriasis. They observed that greater BMI increased the chance of getting the disease.

“We calculated that the risk increased by nine per cent for each higher whole number on the BMI scale,” Løset says.

But the researchers are still uncertain about just how higher weight can lead to psoriasis.

“We still don’t know enough about the mechanisms behind this connection. Fatty tissue is an organ that produces hormones and inflammatory signalling molecules, which could be a contributing factor,” says Løset.

So far, not much research has been done on whether weight loss can cause psoriasis to disappear, although a few clinical studies suggest the possibility.