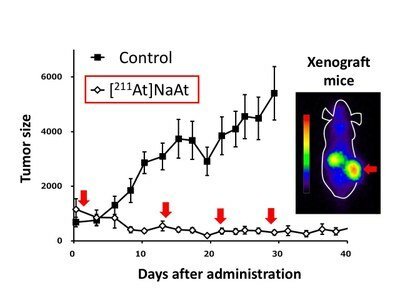 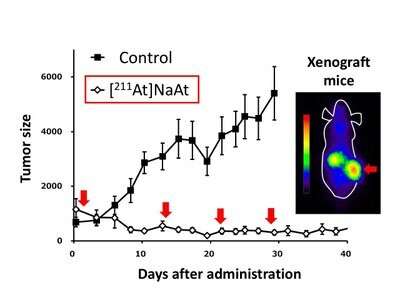 For many years, radioactive iodine which emits beta rays has been used for treatment of thyroid cancer. Generally, 5-year survival rates may exceed 90%. However, some thyroid tumors become resistant to iodine treatment (“iodine-refractory”), and a breakthrough approach is needed. Many research groups have attempted to determine new methods for treatment of iodine-refractory thyroid cancer; none have shown compelling results—until now.

A research team led by Jun Hatazawa has studied targeted alpha therapy which has higher therapeutic effects while limiting damage to normal surrounding cells. In a new study published in the Journal of Nuclear Medicine, the researchers used a large accelerator in the Nuclear Physics Research Center and the facilities of the Institute for Radiation Science to successfully manufacture a therapeutic drug, sodium astatide for injection, which emits highly therapeutic alpha rays from At-211 ions.

“When we administered the therapeutic drug, sodium astatide, to mice that had received grafts of thyroid cancer cells, we noted a marked tumor regression effect due to alpha-ray exposure,” says Tadashi Watabe, corresponding author on the study. “In particular, the mice with higher doses of sodium astatide survived for nearly three times as long as untreated mice, and their tumors were several-fold smaller in size.”

Sodium astatide radiation therapy provides systemic alpha-ray exposure that is expected to be an innovative treatment for a variety of cancers with multiple metastases, including refractory thyroid cancer. Most importantly, injection of the sodium astatide therapeutic drug may enable breakthrough outpatient treatment of cancerous lesions throughout the body without involving external radiation therapy. 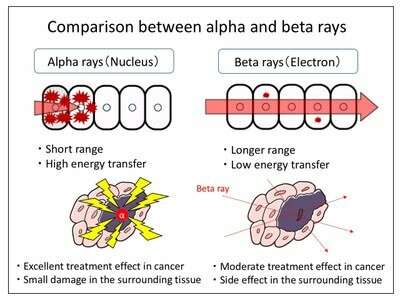