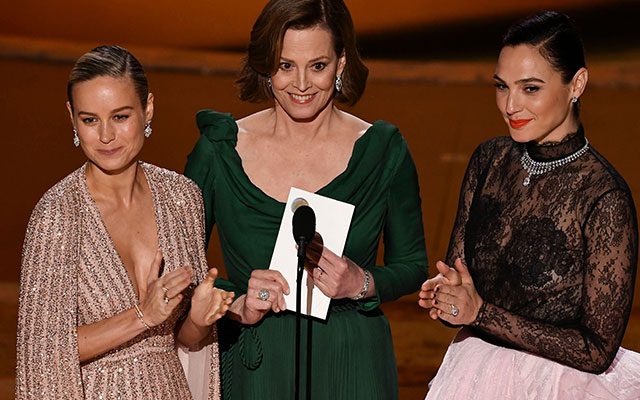 It’s not always easy for us pop-culture obsessives to share our passion with our kids — from petty celebrity gossip to inappropriate content, there’s a lot we have to shelter them from. Still, I like to turn some entertainment news into teaching moments for my son, and the way the 2020 Oscars shut out female directors and all but one actor of color will be one of them. But as I watched the ceremony last night, I realized there was actually a lot of good to share with him, too, and maybe you’ll agree.

Beginning with Natalie Portman’s Dior cape embroidered with excluded female directors such as Greta Gerwig, the stars of the night were determined to highlight the way the Academy ignored women’s achievements in cinema in 2019. Those references continued when Janelle Monáe and Billy Porter’s opened the show with a performance that began with a cover of Mister Rogers‘ “Won’t You Be My Neighbor” and then burst out into a celebration of all of last year’s movies, including some, like Eddie Murphy’s Dolemite Is My Name, that failed to get recognition.

“We celebrate all the women who directed phenomenal films,” Monáe said in the middle of the song. “And I’m so proud to stand here as a black queer artist, telling stories. Happy Black History Month.”

I always love showing my son photos and videos of both Monáe and Porter, incidentally, because they’re great ways to counteract any hurtful words his peers might make about some ways of dressing being just for boys or just for girls.

The writers and producers of the show were clearly trying to make up for the Academy voters’ decisions, as the presenters’ list looked far more diverse than the nominees. Their scripted speeches also kept the topic at top of mind all night long.

Chris Rock and Steve Martin made another joke to highlight the director category exclusion. (Martin: “I thought there was something missing from the list this year.” Rock: “Vaginas?” I laughed, but maybe I’ll skip showing the kid that particular joke this year.)

Before Latino actors Salma Hayek and Oscar Isaac presented the awards for Best Sound Editing and Sound Mixing, Hayek grabbed Isaac’s hand and said she was finally holding an Oscar on the stage. “Congratulations! Oscars not so white now,” Isaac quipped.

Calling out inclusion, too

Though directing and acting were very male- and white-dominated, there was better female representation in some of the other categories. In fact, according to The Wrap, women took home 33 percent of the awards on Sunday, marking a new record.

When presenting the documentary features, Mark Ruffalo pointed out that four out of the five nominated films were directed by women.

In addition to awards going to female actors, hair and makeup, production design and costume design — categories often won by women — there were some proud ladies in categories that used to be quite testosterone heavy. Joker composer Hildur Guðnadóttir won Best Score, for example. Carol Dysinger and Elena Andreicheva picked up statues for Best Documentary Short for Learning to Skateboard in a Warzone (If You’re a Girl). Women who collaborated with men were also taking to the stage a lot. That included Karen Rupert Toliver (Hair Love, Best Animated Short Film), Julia Reichert (American Factory, Best Documentary Feature), and Kwak Sin Ae, one of the producers of Parasite, which won Best Picture (and more!).

If you only show your girls one presentation and acceptance speech, let it be the one that started with Sigourney Weaver, Gal Gadot and Brie Larson. First, they announced their new backstage fight club, in which the loser “gets to answer questions about how it feels to be a woman in Hollywood.” They then introduced Eimar Noone, the first woman to conduct an orchestra at the Oscars, with a medley of Best Original Score nominees.

That moment fittingly ended with the win for Guðnadóttir.

“To the girls, to the women, to the mothers, to the daughters who hear the music bubbling from within, please speak up,” she said on the stage. “We need your voices.”

Last but not least, all the love for moms

This was nothing new or specific to this year, but I always get the warm fuzzies when people thank their moms at the Oscars. Maybe because I like to imagine my son one day thanking me as he wins something?

“Thank you for being my mother and for many other reasons,” Taika Waititi said when he accepted Best Adapted Screenplay, adding that his mother had given him the book on which Jojo Rabbit is based.

Not only would no one be up there without their mothers, but all the men on that stage who are also dads definitely owed it to their partners for making their working lives possible, too.

Of course, we absolutely should not be content with all this. There are a number of female-directed movies coming out in 2020, and many made by and starring people of color. Until the nominees and winners lists look more like the people sitting in those movie theaters, we can’t tell our children that this world is fair to everyone.