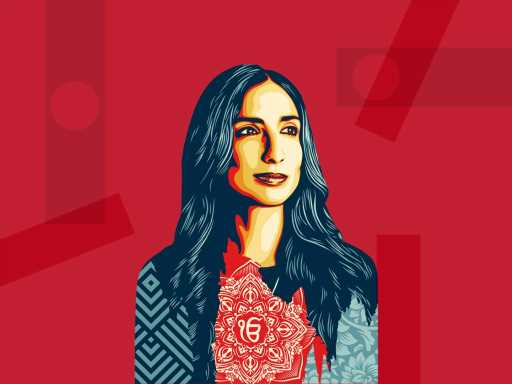 Four days after Sept. 11, 2001, Balbir Singh Sodhi, a Sikh American, was murdered at his gas station in New Jersey. He was the first hate crime victim after the devastating attack on the U.S. Valarie Kaur was just 20 at the time, and Sodhi was a close family friend, whom she called “Uncle.” In that moment, her life changed. As family and friends mourned Sodhi’s death, a civil rights activist was born in Kaur. She took her camera and began filming the stories of her community, which would later become her first film, Divided We Fall: Americans in the Aftermath. Lawyer, civil rights activist, mother, educator, filmmaker, and now best-selling author of See No Stranger: A Memoir and A Manifesto to Revolutionary Love, Kaur has committed herself to “creating a world led by love,” instead of hate.

Rolling your eyes just a little? Kaur used to do that too when she would hear people wax poetic about love. “Anytime someone stood on the stage and said lead with love, I would roll my eyes and look for the exit,” she admits. What she’s learned is that leading with love is easy to say, but much harder in practice. Kaur talked to SheKnows about how she’s doing just that, as well as what it’s like raising brown children in America today.

Our mission at SheKnows is to empower and inspire women, and we only feature products we think you’ll love as much as we do. Please note that if you purchase something by clicking on a link within this story, we may receive a small commission of the sale.

See No Stranger: A Memoir and Manifesto of Revolutionary Love

What’s love got to do with it?

“I remember at 20 years old watching the towers fall…” she trails off. Then she saw an image of a man with a turban appear on television. “I realized that our nation’s new enemy looked like my family,” she says. In the aftermath of 9/11, hate crimes against South Asians sky rocketed. “Balbir Singh Sodhi was the first of dozens of people killed in the aftermath of 9/11… America still doesn’t know his name,” she says. “His murder turned me into an activist.”

In 2016, a reckoning of sorts happened for Kaur and America, when Donald Trump became President. Kaur shares what was a typical morning for her and her young son. “I was tying his hair up in a juda, sending him off to school, (and I realized) that he’s growing up in a nation more dangerous for him, as a little Sikh boy, than it was for me.”

After this realization, she left her job at Stanford Law. “Anytime I had seen change, it wasn’t our lawsuits and our campaigns that helped, but lasting change happened… when there was a rising up in solidarity, and approaching the fight for social justice from a place of love.” There it is again. Love. If you find yourself wanting to dismiss the word, Kaur explains why. “The problem is not with love, it’s the way we talk about it in our country.”

Kaur had her own revelation about love when she had her son — not just because she birthed an actual human, but because her mother was by her side, cooking food and bringing it to the hospital. “She was feeding her baby, as I was feeding mine,” Kaur explains. “I learned from her that love is sweet labor. ‘Revolutionary love’ is the choice to labor for others, for our opponents and ourselves.”

After revealing I heard my first racial slur when I was 7, when a neighborhood kid told me and my younger brother, who was 5 at the time, that we were “too dark to play with,” Kaur shares that her son heard his first racial slur when he was 4. He was sitting on her father’s shoulders, and a woman said, “Go back to your country.” Her father is hard of hearing, so her son had to tell his grandfather what was said to them.

“Like so many Black and Indigenous mothers before us, we cannot shield our children from white supremacy, but we can give them the resilience, the ability to access their own belovedness, and not let anyone steal their dignity,” she says. “It just took me so long to fully embrace that, and my hope is that we can give our children the ability to feel shielded by our love much earlier.”

When asked how the title of her book, See No Stranger, came to be and how it relates to love, Kaur shares more wisdom from her grandfather. “Papaji used to say: ‘My dear, love is dangerous business.’ Because if I choose to see you as a part of me I do not yet know, if I choose to see you as my sister, my brother, my sibling, I have to let your story into my heart, I have to be willing to let your grief into my heart, and I have to fight for you when you are in harm’s way.”

She explains further, “What happens if we see George Floyd as our brother, or Breonna as our sister, or migrants at the border with horses and whips, as our own child, what would we risk, what would we do differently if we saw no stranger? If we began to retrain our eye to see everybody around us as a part of us.”

She hopes that society will scale up love so it shifts our culture, and she explains how through simple practices in her book. The first is “wonder,” which she equates to developing empathy. The mother of two, a 6-year-old and 2-year-old, she explains, “The choice to wonder about another is the beginning of gathering information in how to care for them. As a mother, a lot of my job is to nurture that capacity for wonder that they already have.”

Initially, I planned to ask Kaur how she explains “hate” to her children. As we spoke, I realized, she has taken the exact opposite approach. “Every time I try to explain racism to my children, my words get caught in my mouth, because it doesn’t make sense,” she says. Instead, she finds explaining the concept of hierarchies helpful.

“The oldest hierarchy of human value on this soil is white supremacy, premised on the idea that dark is inferior,” she says candidly. Instead, she tells her children that their job is to create a world in which they see the ‘belovedness’ in all.

“I organize around love more than I do around hate, so that when they are encountered with those limited world views, they are able to not just resist them, or oppose them, but to actually offer an alternative vision about what the world could feel like, because they have felt it,” she explains.

In See No Stranger, Kaur notes that in American pop culture, South Asians, especially those wearing turbans, are often portrayed negatively. So how do we educate kids about this when all they see are negative representations of themselves?

I mention that it wasn’t until Mindy Kaling’s Never Have I Ever that I saw a South Asian lead in an American show; Kaur grabs a Never Have I Ever pillow and laughs. “I’m 40, and the brown teenage girl in me watched it while holding this pillow,” she says, adding, “The representation is enough to heal something deep inside me, that I didn’t know needed attention.

“I grew up with only white dolls. My favorite storybooks only had white characters. The television shows that I watched, the movies that I got to see, the heroes and the heroines were only white. What is different, decades later, is that more and more of us are having access to tell our own stories. So being able to expose my children to children’s books and television shows where the heroes look like them ignites their imagination that they could be something special too.”

To that end, her kids are obsessed with Mira, the Royal Detective, about a young girl in India who’s a detective. “She’s not a princess, she has a job,” Kaur says, noting that they show Indian holidays like Diwali, Holi, and Rakhi. “There are two Sikh characters who wear a patka like my son does and my daughter sees herself as Mira. I keep thinking I don’t know what that’s like — to see myself! I don’t know what that’s like to, at such a young age, to be taking in stories where I am a hero. What’s so exciting is to see other children, who are not South Asian, digest these shows, [and they] see my son and daughter as something special too.”

The backlash of 9/11 has never ended from Kaur’s point of view. “It cast a shadow so long, that it is, now 20 years later, the world we live in. Our communities are now five times more like to become targets of hate than they were before 9/11.” But she says hopefully, “There is one thing that is different. And that is you, me and all of us. There are more of us who are awake now and have the ability to tell their stories now, and are finding solidarity with communities than ever before. Now I know when I’m standing up for Black Lives Matter, to stop Asian hate, and to follow the lead of our Indigenous leaders, we are all part of one larger movement to birth an America where we are all safe and free.”

Kaur set up a learning hub, as a way to teach future generations the importance of what happened on Sept. 11, 2001, and also what followed. She’s vigilant about what her children see on television and in school regarding “whiteness” at a time when there is now a movement in some parts of America to limit education. While America is facing bans on teaching accurate history, Kaur simply wants to make sure everyone’s story is heard.

This particular story is not in her book, but on Jan. 6, 2021, Kaur’s brother-in-law was trapped in the U.S. Capitol when it was stormed. “He would send us these texts that he was okay, but we could see what he could not,” she says, “we could see the Confederate flags and the armed men. He’s not only a reporter for CNN, he’s brown.” She was terrified. “He made it out, and only when he made it out, I could feel my body, ‘Oh this is terror,’ and this terror is familiar. How many times have I seen loved ones in the face of white supremacist violence and felt helpless to protect them?”

That night, Kaur got a call from a friend who was helping her build “The Revolutionary Love” project. “Valarie, I’m so sorry. My parents were at the Capitol,” her friend said. Kaur asked if they were okay. Her friend responded, “No, no, no they were on the outside of the building.” Kaur admits, “As much as I wanted to hate those people, I had to see them through the eyes of their daughter.” She practiced exactly what the title of her book says: she chose to see no stranger. “It made it possible to see them not as one-dimensional monsters, but as human beings who were shaped by the cultural forces around them.”

Before you go, check out these children’s books starring girls of color: