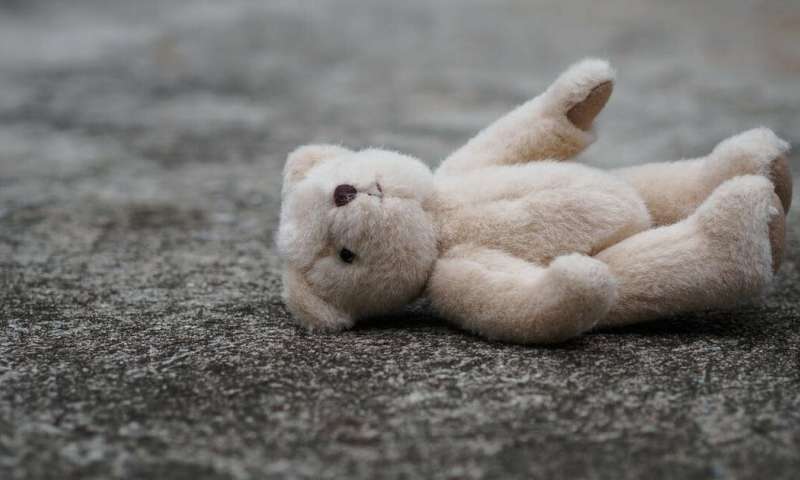 A six-month-old baby was killed earlier this week in what is suspected to be a murder-suicide. Police are investigating whether the child was killed by its father, after their bodies were found in a car on the Sunshine Coast.

As the graph below shows, the rate of filicide offending for males has decreased in Australia in recent years, while the rate for females has increased.

Filicide accounts for about 10 percent of all homicides (murders) in Australia. By comparison, a 2014 US study that looked at around 94,000 cases of filicide found it accounted for 15 percent of murders over that period.

Between 2002-03 and 2011-12, children accounted for 21 percent of domestic homicide victims, the second most frequent group after intimate partners. The AIC study showed 96 percent of filicide victims were aged 0-17 years.

The role of gender in filicides

Where the other sub-classifications are generally committed in higher levels by males, the gender of the offenders is equally distributed in filicide. A 2015 AIC report into domestic homicide identified that between 2002-03 and 2011-12 males committed 77 percent of intimate partner homicides, 80 percent of parricides and 89 percent of siblicides.

This gender-neutral trend follows the pattern of other child abuse behaviours. A 2018 study into child maltreatment found that females accounted for just over half of those responsible for maltreatment.

Why do they do it?

We often see filicide as an act of an evil person. I spent many years examining the concept of evil and concluded that usually an evil act can be committed by a rather ordinary person.

Generally I found one or more of three emotive elements was necessary in the act to allow us to call it evil. These are: the perceived senselessness of the act, the perceived innocence of the victim and the uniqueness of the act. Filicide contains all three.

It is useful to try to understand why people may commit filicide. Seeking understanding is not the same as condoning, nor may the reasons appear rational. In a 2016 article, psychiatry professor Phillip Resnick identified five major motivations for filicide, as set out in the table below.

We could, perhaps, put one of the worst cases of filicide in Australia into the first category. In 2014, Raina Mersane Ina Thaiday stabbed to death seven of her biological children and a niece. She was eventually found unfit for trial due to suffering a psychotic episode triggered by undiagnosed schizophrenia at the time of the murders.

What are the triggers for filicide

All the studies mentioned in this article have highlighted notable rates of mental health issues among those who commit filicide. A 2013 study from the UK, which examined filicides in England and Wales between 1997 and 2006, found that 40 percent of filicide offenders had a recorded mental illness. Young age in the offender was also a factor.

Other risk factors include acrimonious relationship breakdowns and post-separation parenting disputes. Alcohol, drug use, previous offending, a history of domestic violence and suicidal tendencies all increase the risk of offending.

Preventing filicide is difficult as the cause of the offence and relationships between the offender and victim vary. In terms of basic responses, enhanced case management and co-operation and communication between agencies have been suggested as starting blocks to identify and prevent potential filicide.