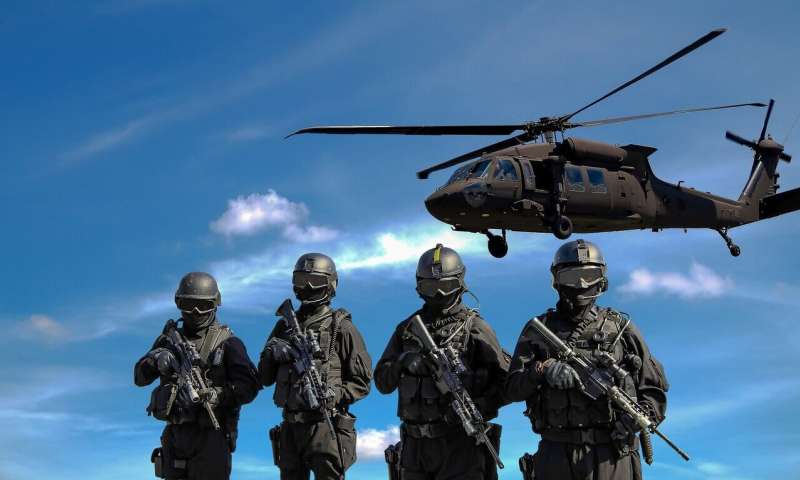 Researchers compared a group of more than 263,000 active duty Army soldiers, age 17-64, who had a health examination in 2012 with a similar group of U.S. civilians participating in the National Health and Nutrition Examination Survey (NHANES) in 2011-2012.

The groups were evaluated on four criteria—current tobacco smoking, weight, blood pressure and diabetes, which represent four of the seven health factors and behaviors that correspond to the American Heart Association’s definition of ideal cardiovascular health. Army data as of 2012 were not sufficient to assess the remaining three metrics: diet score, physical activity and total blood cholesterol.

Each factor was classified as ideal, intermediate or poor according to the Association’s criteria. Overall, a greater proportion of active duty Army personnel met ideal criteria for smoking tobacco and diabetes, compared to civilians (the difference for smoking, however, was minimal). The biggest difference between the groups was in blood pressure—only 30% of soldiers had ideal blood pressure compared to 55% of the civilian group, which was unexpected considering that military screening excludes recruits with elevated blood pressure.

“Ideal weight and blood pressure metrics were strikingly low in both active duty personnel and civilians,” said study author Loryana L. Vie, Ph.D., who is the senior project director of a long-term collaboration between the U.S. Army and the University of Pennsylvania at the University of Pennsylvania Positive Psychology Center, to study the health of Army personnel. “We found that only one-third of the Army and civilian groups had an ideal weight,” she said. About 20% of both groups were current tobacco smokers.

The study findings were contrary to the researchers’ initial assumptions that, because of the Army’s health screenings of potential recruits and emphasis on maintaining good physical condition, more soldiers than civilians would meet criteria that indicate ideal cardiovascular health.

“We had expected that the percentage of ideal weight in the Army group would have been much higher because of the fitness standards to get into the Army and the physical aspects of the job,” said Vie. “It is notable that we didn’t see the advantage we expected in the Army group, and it’s clear that both groups have a lot of room for improvement.”

The researchers divided the groups by age categories. In each age group, the civilian population had a higher percentage of those with ideal cardiovascular health compared to the Army group in all four criteria. However, the overall rates were quite low in both groups, even among those age 17 to 29. In that age group, only 16% of the civilian population and less than 10% in the Army group were ideal in all four categories.

“It was surprising to find that Army personnel were less likely to have ideal cardiovascular health—especially due to higher blood pressure—compared to civilians of similar ages. Because recruits are screened to exclude high blood pressure and maintaining physical fitness is a major focus for the Army, we expected lower, not higher, blood pressure in the Army,” said senior author Darwin R. Labarthe, M.D., M.P.H., Ph.D., professor of preventive medicine at Northwestern University Feinberg School of Medicine in Chicago, Illinois in an accompanying commentary published by the American Heart Association’s Center for Health Metrics and Evaluations.

“We’ve identified a point of concern about Army health which calls for further evaluation. Further analyses should address nutrition and physical activity, as well as possible effects of deployment experience. Ultimately, we need to help our soldiers become heart healthy,” he said.

The researchers say their findings point to the need to make improvements through policy and behavioral changes to promote, preserve and, when compromised, restore ideal cardiovascular health in both the U.S. Army and civilian populations.