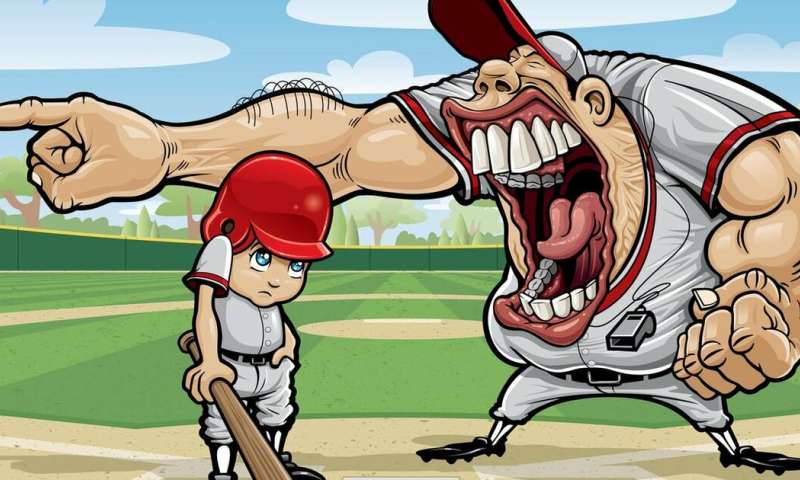 Sports coaches have been in the headlines recently for all the wrong reasons. At the end of 2018, the University of Maryland investigated a football coach for intimidation, humiliation and verbal abuse. This followed a player dying of heat stroke after a training session on a 41℃ day.

Earlier that year, UK swimmer Karen Leach revealed the long-term impact of what she said was sexual, mental, physical and emotional abuse inflicted on her by a former Olympic coach when she was a young swimmer. And US Olympic swimmer Ariana Kukors filed a lawsuit against a former coach for sexual abuse.

Studies show nearly 50% of athletes suffer from a mental health issue such as depression or anxiety.

Athlete abuse includes physical abuse, sexual abuse and emotional abuse. A study of 12 former child athletes in the United Kingdom showed most had been frequently threatened and humiliated – part of emotional abuse. These were former athletes across several sports including diving, football, gymnastics, hockey, netball, and track and ﬁeld athletics.

So, what does emotional abuse in sport coaching look like, and why does it happen?

Many youth sportsmen and women will be familiar with one or more coaching behaviours that are considered emotionally abusive.

Emotional abuse involves deliberate, prolonged, repeated non-contact behaviours that occur in unbalanced relationships of power such as between a coach and athlete. Researchers suggest emotional abuse by coaches can include belittling, humiliating, shouting, scapegoating, rejecting, isolating, threatening and ignoring. These forms of abuse can be subtle and hidden in accepted coaching practice.

Coaching that uses such methods can contribute to psychological distress and cause emotional breakdown in athletes. In youth sport, participants who suffered emotional abuse reported a range of emotions including feeling stupid, humiliated and depressed.

Why some coaches may be abusive

Organised sport in Australia has been described as a focal point for community engagement, pride and achievement. Australia has well-developed coach education programs to support such values in sport. These programs focus on skill development and fun.

But research has found coaches value the knowledge of admired or experienced coaches more than that of formal coach education. This may result in coaches recycling practice seen as accepted, but which may include abusive or harmful methods.

Formal coach education also uses mentors to help develop beginning coaches. But use of mentors has been shown to shape practice so old ideas are valued and acceptance of more senior, and perhaps “old-school” coach’s ideas encouraged.

Coaches have been shown to use emotionally abusive behaviours when trying to develop mental toughness. Methods including extreme training environments and practices such as humiliation, intimidation and forced physical exertion.

Talking about a program where female cyclists are trained for a competition in Europe, ex professional cyclist Rochelle Gilmore said: “… they’ve got together to work out how they are going to mentally and physically break these girls down and get them to their breaking point, and that’s pretty much what the camp wants to do. It wants to see these athletes – see how they respond to things under pressure, under really, really severe fatigue.”

Why do athletes accept this?

Emotionally abusive coaching can sometimes be difficult for athletes and parents of athletes to recognise. Research shows parents can also become socialised into sporting cultures and become bystanders to abuse. The motivation to ignore abuse can be as simple as wanting their child to reach their full potential.

Some athletes show a willingness to forgo personal safety in the pursuit of results. Some are willing to subject themselves to anything that might assist in achieving success. Athletes can also misinterpret emotionally abusive practice as a sign their coach is interested in their improvement.

In one study of abuse in elite sport, a female gymnast said: “My coach would scream at me, but I knew she cared about me. I knew that she wasn’t screaming at me just to make me feel like I was nothing. There was an ulterior motive and that was to make me the best.”

Respect for the coach and an expectation this behaviour is normal can encourage the behaviour to continue. Research also shows media, including films, can contribute to the normalisation of abusive coach/athlete relationships.

Abusive coaching behaviours, for instance, are hidden behind inspiring music and cinematography in the 2000 drama Remember the Titans, where the coach tells the team: “… we will be perfect in every aspect of the game… You drop a pass you run a mile… You fumble a football and I will break my foot off in your John Brown hind parts. And then you run a mile.”

And elite athletes who misrecognise potentially abusive practice can steer public opinion when sharing of stories of extreme practices through social media. For instance, swimmer Michael Phelps once discussed in a Facebook post a training set he was proud of that brought him “pain”.

What can be done?

Building toughness and resilience through exposure to challenging situations and training loads is an appropriate way to boost performance. But athletes need to be aware of the ethical boundary – the line between tough and abusive. Finding this line is the challenge of education.

Most coaches believe they are acting in the best interest of the athletes under their guidance. But coaches must be better educated in the kinds of methods that, even with the best intentions, can result in abuse.

Sporting organisations, coaches, athletes and parents need to understand what constitutes abuse. Gender and power imbalances between coaches and athletes that are central to abuse need to also be highlighted in coach education.

It should be remembered that coaching practice in elite contexts is not always transferable to junior sport.