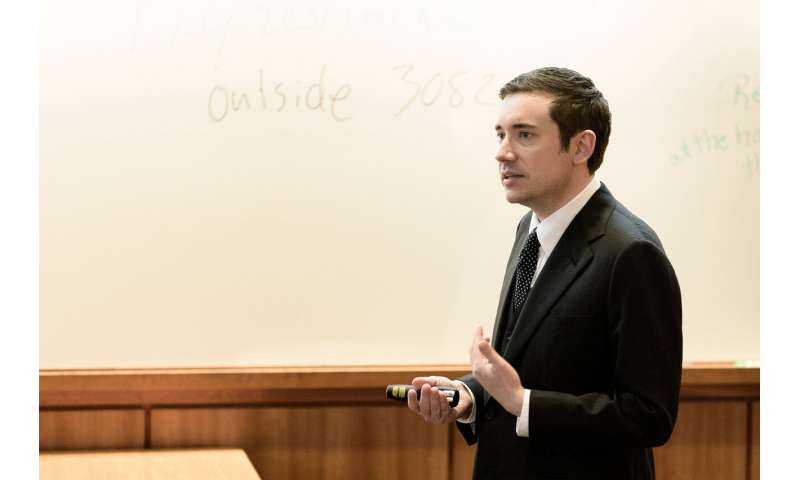 You might feel sad after looking closer at studies about happiness. That’s because an emotion that’s easy to experience is immensely difficult to measure, says Purdue University economist Timothy Bond.

“Happiness research usually asks subjects to rank their happiness on a scale, sometimes with as little as three points: ‘not too happy,’ ‘pretty happy’ and ‘very happy.’ But not everyone who says they’re pretty happy feels the same,” said Bond, an associate professor in the Krannert School of Management and a faculty affiliate in the Purdue University Research Center in Economics.

“It’s a very broad category,” he added, “so there could be differences in intensity within the categories that you just can’t measure with these studies.”

Over the last four years, Bond and Boston University economist Kevin Lang have studied the flaws in prominent happiness research by applying well-known results from statistics and microeconomic theory. Their findings recently were published in the Journal of Political Economy.

“We take these tools and apply them to nine studies in happiness literature and show that if you change the assumptions about what’s going on inside the categories even mildly, you can completely change the conclusions of happiness research,” Bond said.

Drawing from data commonly used by social scientists, such as the General Social Survey and the World Values Survey, the researchers tested nine key results from happiness literature, such as the effect of marriage, children and disabilities on happiness, as well as cross-country comparisons. By skewing data slightly to the left or right within the reported categories, they could not draw conclusions stronger than: “Nigeria is somewhere between the happiest and least happy country in the world” or “the effect of the unemployment rate on average happiness is somewhere between very positive and very negative,” according to the study.

The problems arise, Bond said, because happiness is a subjective emotion which is experienced along a continuum.

“Because there’s so few categories, you don’t know where people fall within them,” Bond said. “The second problem is that we don’t know if people all use the categories the same way. I might say I’m pretty happy, but if you felt the same way, you might say you’re very happy.”

Yet lawmakers increasingly have turned to happiness scales to inform policy on an array of issues, such as entitlement programs, unemployment and inflation. Over the past decade, the United Nations and several countries, including the United Kingdom, have gathered data on individual happiness in an attempt to create a more holistic measure of well-being compared to gross domestic product.

“People readily acknowledge that GDP is not a perfect way of measuring the economic health of a country,” Bond said, “but the extreme limitations you have in analyzing data suggest that replacing GDP with happiness scores would certainly be premature.”

Happiness research, however, remains influential in the eyes of stakeholders, media and the general public, with the most popular studies being focused on cross-country comparisons, Bond said. The UN recently released its 2019 World Happiness report, for example, ranking No. 1 Finland well ahead of the United States at No. 19.

Lang said several measures should be taken into account to assess a country’s well-being. The UN report analyzed GDP and life expectancy in addition to survey data from Gallup.

“Our research shows that we simply cannot use surveys to measure happiness in a way that makes them meaningful as a social or economic indicator or that can be used to guide policy,” Lang said. “We want to go beyond GDP, but we should focus on indicators such as suicide, longevity and morbidity, and environmental degradation.”

Because so many factors contribute to well-being, it will always be difficult, if it not impossible, to distill a country’s economic complexities into a single score, Bond said.