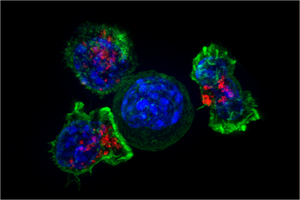 Published in Nature Communications, the study focused on Neuropilin-1 (NRP1), a transmembrane protein that has been connected to the progression of cancers, particularly metastasis. The researchers identified two novel human NRP1 splice variants in colorectal cancer, both defective in N-linked glycosylation modification.

This defect leads to a constant amount of the NRP1 variants shuttling between the cell surface and the inside of the cell upon stimulation of HGF growth factor; it also leads to a decrease in the levels of NRP1 variants’ degradation so as to their accumulation on endosomes, the membrane-bound compartments inside a cell.

These NRP1 variants form a complex with MET and β1-integrin receptors and transport together with these receptors into endosomes. This complex provides persistent endosomal signals to activate the FAK/p130Cas pathway, thereby promoting colorectal cancer cell migration, invasion and metastasis. Additionally, the colorectal cancer cells that have formed NRP1 variants/MET/ β1-integrin complexes are resistant to drugs that inhibit MET tyrosine kinase activity, suggesting that colorectal cancer patients with these variants are likely to not respond to MET-targeted therapy.

The study was led by the lab of Qing-Bai She, associate professor in the UK Department of Pharmacology and Nutritional Sciences.