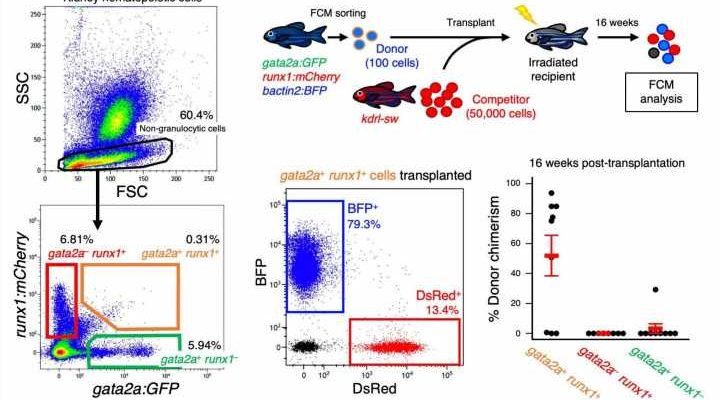 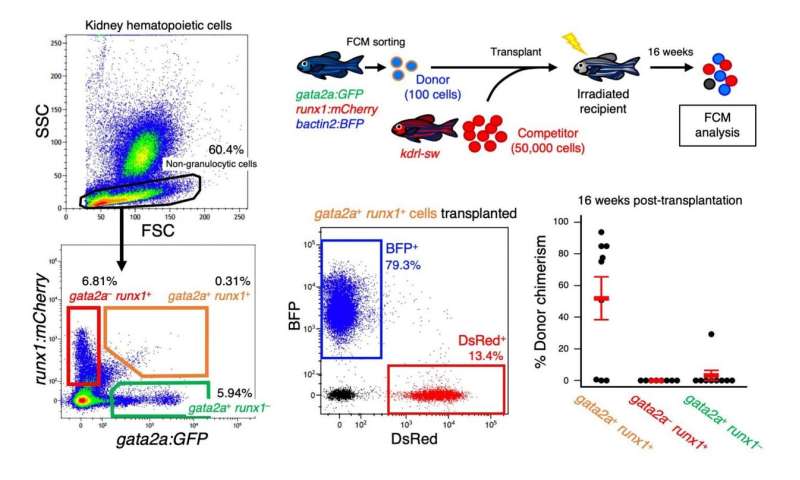 Hematopoietic stem cells (HSCs) are multipotent cells that can develop into every type of blood cell in the body. They can also be used in medical research to understand and treat blood-based diseases. Zebrafish (Danio rerio) are used to study HSCs, particularly in the field of developmental biology, but the research in the adult animal is often limited because stem cells are difficult to purify in this species. Researchers at Kanazawa University and their collaborators now describe a purification scheme that allows these elusive zebrafish HSCs to be collected.

“Zebrafish are a great system to study how hematopoietic cells function in normal development and their role in disease,” says lead researcher Isao Kobayashi. “Much of their biology mirrors what we see in humans, and with zebrafish there’s the added benefit of having quite a few experimental tools at our fingertips, including live cell imaging and comparative analysis among vertebrates. Unfortunately, it’s proven challenging to effectively isolate HSCs from this species, and this has been a major impediment to the field.”

HSCs are highly abundant in the kidneys of adult zebrafish (unlike in humans, where HSCs are found in bone marrow). The challenge is separating them from other cells found in kidneys. Cell separation usually involves a purification technique called flow cytometry, where cells are sent in single file through a tube and hit with a laser beam. The machine (a flow cytometer) then sorts the cells based on how they reflect or scatter light.

In the study, published in Scientific Reports, the researchers created a strain of zebrafish that makes two light-emitting proteins, one green (Green Fluorescent Protein, GFP) and one red (mCherry), that can be sensed and sorted by a flow cytometer. Each fluorescent protein in this zebrafish strain was regulated by the genes related with blood cells, but the cells having both fluorescent proteins were limited in HSCs. By color coding the cells with two distinct blood cell markers, the team was able to purify cells that show hallmark signs “stemness”—like the ability to self-propagate and differentiate into other types of blood cells.

So, what might the successful isolation of HSCs in zebrafish mean for the field of stem cell research?