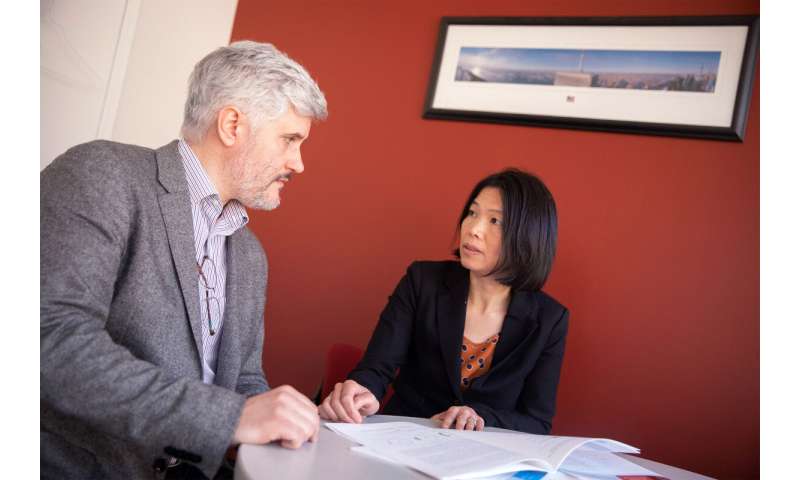 In the lawless eastern provinces of sub-Saharan Africa’s biggest country, an Ebola outbreak that has quietly become history’s second-largest epidemic may wind up turning not on drugs or quarantine, but on a third, often underappreciated factor: trust.

Though it’s known that gaining the confidence and cooperation of local people is a key to successful epidemic response, the long, terrible history of violence in the eastern Democratic Republic of the Congo has elevated it from one element among many to a matter of paramount importance, according to survey work led by Harvard researchers Patrick Vinck and Phuong Pham.

The pair, both assistant professors at the Harvard T.H. Chan School of Public Health and Harvard Medical School and researchers at the Harvard Humanitarian Initiative (HHI), have worked with Harvard Medical School’s Eric Nilles, an infectious disease expert and director of the initiative’s Program on Infectious Diseases and Humanitarian Emergencies, and partners at three local universities to survey thousands of residents of the affected region.

Their results, published recently in The Lancet Infectious Diseases, show that near the epidemic’s epicenter there is widespread distrust of local politicians, doubt whether Ebola even exists, and concern that the outbreak was fabricated for financial or political gain. The results of their survey, Vinck and Pham said, indicate that educating the public and gaining its trust in this case is even more critical than in epidemics elsewhere.

“When the outbreak started, [responders] were approaching Ebola the same way they approached previous outbreaks,” Pham said. “What complicates this response, compared with other outbreaks, is that there is an ongoing [violent] conflict.”

While effective outreach should disseminate accurate information in order to fight rumor and misinformation, Vinck said that outreach might most effectively be done cooperatively with trusted local leaders: politicians, religious leaders, and health care workers. In addition, he said, information distributed to the broader public should not be merely provided but also exchanged, both conveying what health care workers think is important and responding to residents’ questions about the epidemic.

Survey responses showed the importance of that two-way exchange, as many residents said they’d received information about what to do if they became sick, but little about courses of action if a neighbor fell ill or about the status of the broader epidemic.

The disease has struck a mineral-rich region along Congo’s border with Rwanda and Uganda, which has experienced long-running unrest. It was the site of two pan-Africa wars in the 1990s and early 2000s, and ongoing fighting between the Congolese Army and well-armed militias ever since.

Between October and December, there were 313 incidents of violence in North and South Kivu provinces, including attacks against Ebola responders, abductions, and massacres of civilians by armed forces, according to the New York University–based Kivu Security Tracker. The violence was reflected in the survey data, in which local residents listed “banditry” and “ongoing armed conflicts” among their highest concerns. In response to one question, 29 percent said they’d been robbed in the previous year alone.

“You’ve got massacres, you’ve got violence, and nobody’s paying attention to that,” Vinck said, “so it fueled the mistrust early on. Ebola is very deadly. … We might imagine that violence would [fall] in the interest of solving the health crisis, but because so many people believe in rumors, it’s not happening.”

After Ebola was detected last August, international health workers drew on experience gained in the 2013 West Africa Ebola epidemic and arrived in force, armed with new treatments and a vaccine developed in response to the earlier outbreak.

Despite the robust response and new tools, health care workers were repeatedly assaulted and, in March, Doctors Without Borders was forced to withdraw from Ebola treatment centers in two cities after the centers were attacked and partly destroyed. According to statistics cited by the organization, 40 percent of Ebola deaths still happen outside medical centers—an indication that many of the ill are not seeking treatment—and 35 percent of new cases can’t be linked to existing ones, meaning a big part of the transmission network remains unknown.

“We have a striking contradiction,” Joanne Liu, Doctors Without Borders’ international president, said in a March 7 statement. “On the one hand, a rapid and large outbreak response with new medical tools such as vaccines and treatments that show promising outcomes when people come early, and on the other hand, people with Ebola are dying in their communities, and do not trust the Ebola response enough to come forward.”

The surveys that Vinck, HHI’s research director, and Pham, director of its Program on Evaluation and Implementation Science, led in collaboration with colleagues at three Congolese universities over the past three years were begun to better reflect public opinion about security in the region, which, in addition to fighting, has seen widespread atrocities and the systematic use of rape as a weapon of war.

When the outbreak began late last summer, researchers added questions about Ebola to their regular quarterly poll in September. Responses showed that roughly a quarter, 230 of the 961 respondents, didn’t believe Ebola was real and almost 40 percent, 372, wouldn’t accept a vaccination that protected against it.

“So [the lack of trust] is not entirely surprising, but what’s surprising is how quickly it became violent, especially against health actors,” Vinck said, “In general, on the political side, you have low trust, but when it comes down to health actors, trust is higher. So the fact that it became violent just shows the importance of political trust and having an understanding of the broader context.”

The most recent survey, conducted in December, shows the potential impact of public education campaigns done in conjunction with local partners. In the city of Beni, in the epidemic’s epicenter, public knowledge about Ebola has increased dramatically since September, and 82 percent said they’d accept vaccination. Along with that change, Pham said, the number of new cases dropped to near zero.

By contrast, in two other cities at the epidemic’s epicenter, Butembo and Katwa, public knowledge about the virus remained low. Acceptance of a vaccine is also low—just 38 percent in Butembo—and infection rates high.