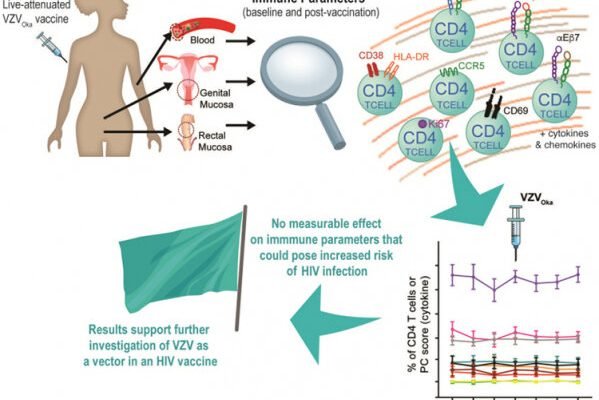 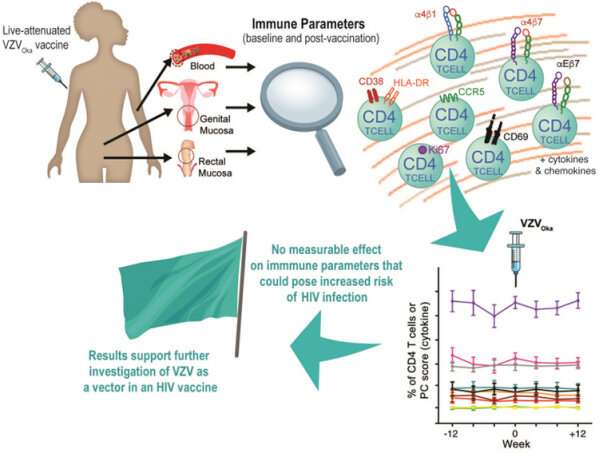 Scientists have long seen the chickenpox virus in vaccine form as a potential “vector” or carrier to deliver HIV genes and generate immunity to HIV, but safety concerns about this approach have limited further advances.

The new study is the first to show that chickenpox vaccine does not trigger an unwanted “HIV-welcoming” immune state in the genital mucosa – as was seen in a previous clinical trial that used a similar viral vector – or in the bloodstream.

“Our study investigated an important safety concern that posed a barrier to this vaccine strategy,” said Kelly MacDonald, a professor of immunology at U of T and of internal medicine, immunology and medical microbiology at the University of Manitoba. “The stage is now set to test a chickenpox-based HIV vaccine.”

The Journal of Clinical Investigation published the paper online on Jan. 22.

The researchers conducted their study in Kenya, a country severely affected by the HIV epidemic. Study participants were 44 healthy, HIV-negative women who were at low risk for HIV exposure and tested positive for immunity to chickenpox.

Lead author and U of T post-doctoral researcher Catia Perciani worked with researchers from the Kenya AIDS Vaccine Initiative-Institute of Clinical Research at the University of Nairobi to give study participants a high-dose vaccine against only chickenpox virus. The researchers then tested each participant’s blood, as well as mucosal cells from the cervix and rectum at intervals of four, eight and 12 weeks.

The key finding was that 12 weeks post-vaccination, there was no significant difference in the frequency of activated HIV target cells, compared to pre-vaccination.

The study also showed that the vaccine vigorously boosted the women’s existing immunity to chickenpox, in their bloodstream but also in the genital area. This immune response in the genital area, where HIV infection first occurs, is a highly positive finding for the HIV vaccine concept, MacDonald said.

A blended chickenpox and HIV vaccine would take advantage of the fact that chickenpox virus undergoes silent cycles of reactivation in the body. Each time it “wakes up” from its dormant state, the body’s immunity quickly controls it and the immunity is boosted.

“The idea is to insert HIV genes into the chickenpox virus like extra beads on a necklace. As the Varicella genes or ‘beads’ are made into protein, the HIV genes also get made into proteins and therefore stimulate immunity to HIV without the risk of giving the actual HIV virus,” MacDonald said. “We expect that each time the chickenpox virus is reactivated, it will also refresh immunity to HIV.”

MacDonald said the next steps are to continue testing the vaccine strategy using non-human primates and start developing a chickenpox virus-vectored HIV vaccine for a clinical trial in humans.