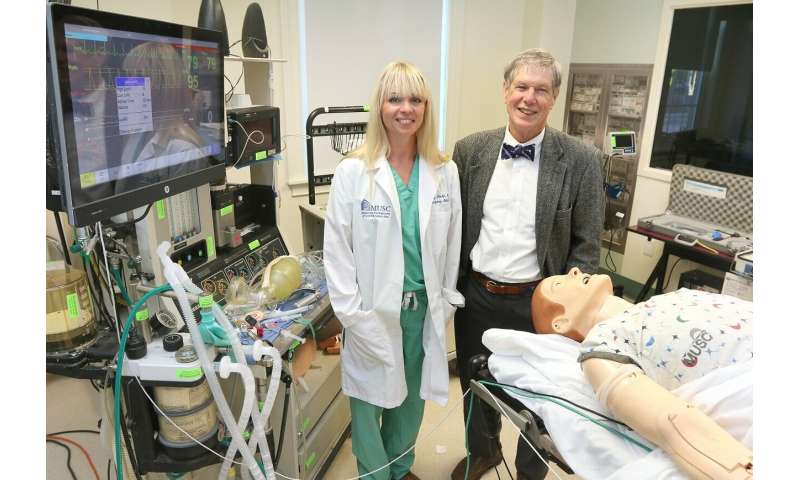 In a world where we can travel the globe by jet, diseases that were once thought to plague faraway places can now strike close to home.

The U.S. had to learn this the hard way. In 2014, a patient harboring Ebola returned home to Dallas, Texas from Liberia. Within 15 days of this person’s arrival, the Centers for Disease Control and Prevention (CDC) had confirmed two secondary cases in nurses who were treating the infected patient.

Ebola virus is very easily contracted from body fluids—a mere ten viral particles will do it—and people who get it have up to a 78 percent chance of dying. Health care workers are among the most vulnerable.

In addition to a human toll, Ebola also exacts an economic one. Treatment of an Ebola patient in the U.S. can range from $30,000-$50,000 per day, limiting the number of hospitals who can treat it, and making its spread a very costly problem

The best hope for controlling this lethal foe is to prevent it. Researchers at the Medical University of South Carolina (MUSC) have created an online software package via the SmartState spin-off company, SimTunes, LLC, to train health care workers using simulation in safe Ebola disease response. They report promising findings in a small cohort of MUSC health care workers in an article published in the December 2018 issue of Health Security.

“This training program takes information from multiple resources, including the CDC, the National Ebola Training and Education Center and the European Network for Infectious Diseases,” says Lacey MenkinSmith, M.D., assistant professor of Emergency Medicine at MUSC and first author of this article.

“What makes the program unique is that it combines all that information into one training program that is widely distributable.”

“The entire course, including background material and hands-on simulation practice, is delivered over the Internet, so people can be trained immediately,” adds Jerry G. Reves, M.D., distinguished professor and emeritus dean of the College of Medicine at MUSC and principal investigator of the CDC-funded study.

The researchers tested the usefulness of their software package in 18 health care workers at MUSC, a state treatment center for Ebola. The health care workers were divided into two groups based on their experience level with treating high-risk infectious disease. The software package increased the knowledge of both groups about effective prevention by up to 19 percent.

Both groups also performed extremely well in simulation scenarios, with only 2.3 percent of 341 total steps flagged for critical errors in both groups. These scenarios included cleaning up spills, putting on a biosuit correctly and properly responding to a needle stick. Practicing all of these scenarios helps to reduce the risk of infection of the health care workers treating the Ebola patient.

These results validate this software package as a way to streamline and adequately educate health care workers on proper techniques to reduce infection when treating an Ebola patient.

The MUSC team plans next to test their training program in other health care settings relevant to Ebola. These include community hospitals, where Ebola patients might first be seen, or intermediary hospitals, which would care for them until they could be sent to a treatment center like MUSC.

MenkinSmith, who specializes in global emergency medicine, would also like to test the program in developing countries, and is planning to use the course in Uganda.

“I want to see how we can adapt what we have to a place that is a low-resource health care setting, such as a site like Uganda that I am set to visit,” says MenkinSmith. Uganda’s neighbor, the Democratic Republic of Congo, is currently experiencing an Ebola outbreak.