Some 15 to 20 percent of all breast cancers are triple-negative, meaning they lack receptors for estrogen, progesterone and human epidermal growth factor type 2. They have the worst prognosis of all breast cancers and very limited treatment options. Finding a treatment that distinguishes between cancer cells and normal cells has been especially challenging.

A novel precision medicine strategy described today in Science Advances offers an intriguing ray of hope. Researchers at Boston Children’s Hospital, with bioengineers at the City College of New York (CCNY), showed that dually-targeted, antibody-guided nanoparticles, loaded with an existing chemotherapy drug, markedly improved tumor targeting, decreased tumor and metastatic growth and dramatically improved survival in a mouse model of triple-negative breast cancer. There were no observable side effects.

Led by Peng Guo, Ph.D. and Jiang Yang, Ph.D. in the Moses Laboratory in Boston Children’s Vascular Biology Program, the researchers first meticulously screened African American and Caucasian triple-negative breast cancer cell lines to see if they carried any of 68 common cancer antigens. They identified 16 potential targets common to all tested cancer cell lines, and after further evaluation chose the two strongest hits: surface receptors called ICAM1 and EGFR that were abundant on the cancer cells but rare on noncancerous cells.

Guo and Yang next determined the relative amounts and locations of each receptor on the cancer cells. The ratio of ICAM1 to EGFR receptors, which were found in close proximity to each other, ranged from 1.5:1 to 4.2:1 among the cell lines. Based on these ratios, the team engineered customized liposomes with antibodies targeting ICAM1 and EGFR in the corresponding ratio, a technique called complementary targeting.

“If we want to selectively deliver drugs into tumors, using the synergy of two targets is significantly better than using a single target,” says Marsha Moses, Ph.D., who directs the Vascular Biology Program. “Knowing the molecular ratios and organization of the two targets is key to successful dual targeting.” 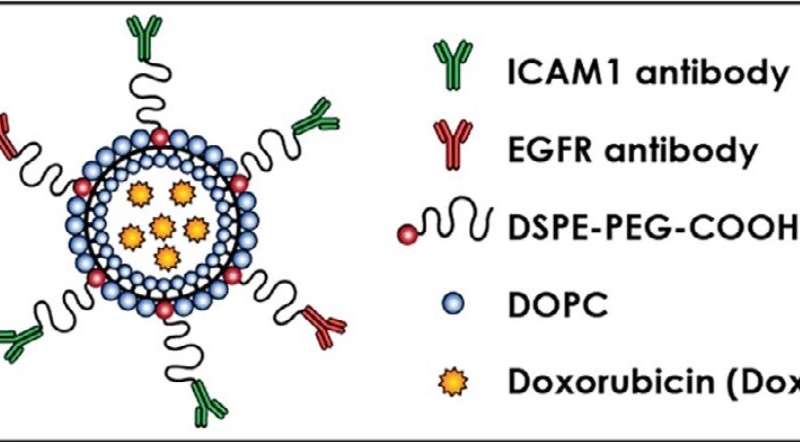 “We found that much greater amounts of the chemotherapy drug were delivered specifically to the tumor cells,” says Guo. “This met our goal of reducing the total amount of drug needed to treat the tumor, potentially reducing chemotherapy-induced adverse effects in patients with triple-negative breast cancer.”

Tested in mice, the DCLs inhibited the growth of triple-negative breast tumors by about 40 percent as compared with free doxorubicin (not packaged in liposomes). They also outperformed liposomes targeting either ICAM or EGFR alone.

Perhaps the most dramatic difference was in survival. This Kaplan-Meier curve shows metastasis-free survival among the different treatments. As indicated by the flat black line at the top, mice treated with DCLs survived the longest, without disease progression.

The researchers measured “off target” toxicity of the DCLs at different doses by checking the animals’ organs and blood chemistry. They found no signs of liver or kidney toxicity, even at the highest doses.

“A central problem in cancer therapy has been how to engineer therapeutics that distinguish cancer cells from normal cells, in order to minimize side effects,” says Guo. “Using a rational approach to select a combination of targets as a ‘barcode’ to recognize cancer cells is a strategy that has not yet been applied to triple-negative breast cancer.”

The researchers have filed for patents on their technologies, which they say can be used as a platform to create customized treatments for other cancers and diseases. They are in talks with companies to move the strategy into clinical development, buoyed by the fact that elements of the liposome-doxorubicin formulation and the ICAM1 and EGFR targets are already FDA-approved.

“We’re very serious about working to get this to the clinic,” says Moses. “It is part of a larger portfolio of targeted therapies that our lab is developing for difficult-to-treat cancers.”