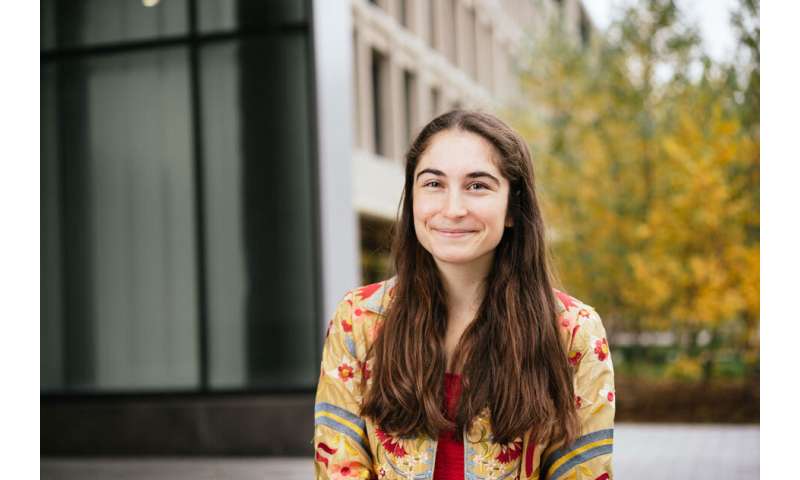 When Katie O’Nell’s high school biology teacher showed a NOVA video on epigenetics after the AP exam, he was mostly trying to fill time. But for O’Nell, the video sparked a whole new area of curiosity.

She was fascinated by the idea that certain genes could be turned on and off, controlling what traits or processes were expressed without actually editing the genetic code itself. She was further excited about what this process could mean for the human mind.

But upon starting at MIT, she realized that she was less interested in the cellular level of neuroscience and more fascinated by bigger questions, such as, what makes certain people generous toward certain others? What’s the neuroscience behind morality?

“College is a time you can learn about anything you want, and what I want to know is why humans are really, really wacky,” she says. “We’re dumb, we make super irrational decisions, it makes no sense. Sometimes it’s beautiful, sometimes it’s awful.”

O’Nell, a senior majoring in brain and cognitive sciences, is one of five MIT students to have received a Marshall Scholarship this year. Her quest to understand the intricacies of the wacky human brain will not be limited to any one continent. She will be using the funding to earn her master’s in experimental psychology at Oxford University.

Chocolate milk and the mouse brain

O’Nell’s first neuroscience-related research experience at MIT took place during her sophomore and junior year, in the lab of Institute Professor Ann Graybiel.

The research studied the neurological components of risk-vs-reward decision making, using a key ingredient: chocolate milk. In the experiments, mice were given two options—they could go toward the richer, sweeter chocolate milk, but they would also have to endure a brighter light. Or, they could go toward a more watered-down chocolate milk, with the benefit of a softer light. All the while, a fluorescence microscope tracked when certain cell types were being activated.

“I think that’s probably the closest thing I’ve ever had to a spiritual experience … watching this mouse in this maze deciding what to do, and watching the cells light up on the screen. You can see single-cell evidence of cognition going on. That’s just the coolest thing,” she says.

In her junior spring, O’Nell delved even deeper into questions of morality in the lab of Professor Rebecca Saxe. Her research there centers on how the human brain parses people’s identities and emotional states from their faces alone, and how those computations are related to each other. Part of what interests O’Nell is the fact that we are constantly making decisions, about ourselves and others, with limited information.

“We’re always solving under uncertainty,” she says. “And our brain does it so well, in so many ways.”

Outside of class, O’Nell has no shortage of things to do. For starters, she has been serving as an associate advisor for a first-year seminar since the fall of her sophomore year.

“Basically it’s my job to sit in on a seminar and bully them into not taking seven classes at a time, and reminding them that yes, your first 8.01 exam is tomorrow,” she says with a laugh.

She has also continued an activity she was passionate about in high school—Model United Nations. One of the most fun parts for her is serving on the Historical Crisis Committee, in which delegates must try to figure out a way to solve a real historical problem, like the Cuban Missile Crisis or the French and Indian War.

“This year they failed and the world was a nuclear wasteland,” she says. “Last year, I don’t entirely know how this happened, but France decided that they wanted to abandon the North American theater entirely and just took over all of Britain’s holdings in India.”

She’s also part of an MIT program called the Addir Interfaith Fellowship, in which a small group of people meet each week and discuss a topic related to religion and spirituality. Before joining, she didn’t think it was something she’d be interested in—but after being placed in a first-year class about science and spirituality, she has found discussing religion to be really stimulating. She’s been a part of the group ever since.

O’Nell has also been heavily involved in writing and producing a Mystery Dinner Theater for Campus Preview Weekend, on behalf of her living group J Entry, in MacGregor House. The plot, generally, is MIT-themed—a physics professor might get killed by a swarm of CRISPR nanobots, for instance. When she’s not cooking up murder mysteries, she might be running SAT classes for high school students, playing piano, reading, or spending time with friends. Or, when she needs to go grocery shopping, she’ll be stopping by the Trader Joe’s on Boylston Avenue, as an excuse to visit the Boston Public Library across the street.

Quite excited for the future

O’Nell is excited that the Marshall Scholarship will enable her to live in the country that produced so many of the books she cherished as a kid, like “The Hobbit.” She’s also thrilled to further her research there. However, she jokes that she still needs to get some of the lingo down.

“I need to learn how to use the word ‘quite’ correctly. Because I overuse it in the American way,” she says.

Her master’s research will largely expand on the principles she’s been examining in the Saxe lab. Questions of morality, processing, and social interaction are where she aims to focus her attention.

“My master’s project is going to be basically taking a look at whether how difficult it is for you to determine someone else’s facial expression changes how generous you are with people,” she explains.