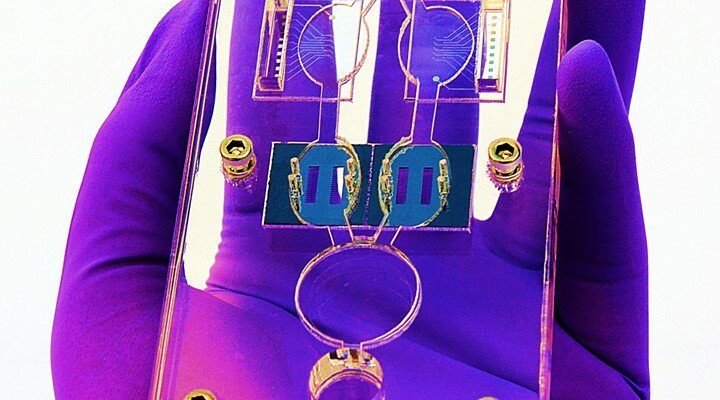 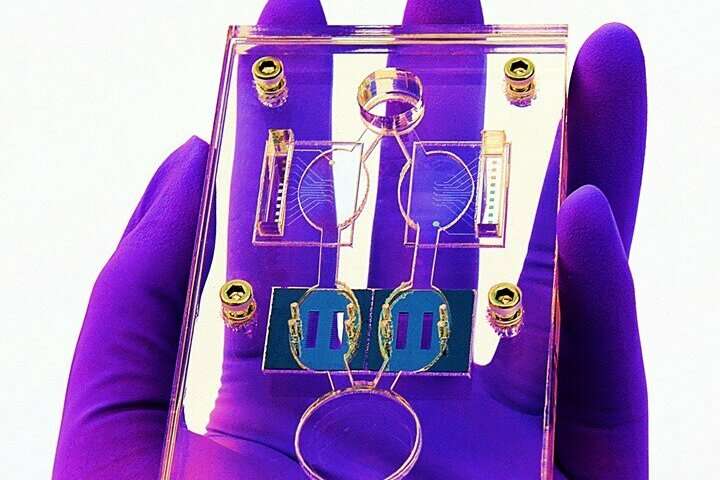 The replacement of animals as test subjects is one step closer to reality with the successful testing of multi-organ “human-on-a-chip” models to recapitulate the 28-day experiments typically used in animals to evaluate the systemic toxicity of drug and cosmetic compounds. As published and featured as a frontispiece in the prestigious peer-reviewed scientific journal Advanced Functional Materials, the microfluidic device with interlinking modules containing human-derived heart, liver, skeletal muscle and nervous system cells was able to maintain cellular viability and record cellular function in real-time for 28 days.

The University of Central Florida (UCF) in collaboration with the Florida biotech firm Hesperos, Inc., has shown that one of its innovative four-organ in vitro (out of body) model systems is able to realistically replicate in vivo (in body) responses to sustained drug dosing of human cells.

“The technology could allow us, in the very near future, to move chronic drug experiments from animal models to these novel human in vitro models,” said Hesperos Chief Scientist James J. Hickman, who is a Professor at UCF’s NanoScience Technology Center.

This is important because the toxicity and efficacy of new compounds are studied upon both acute (single administration at high concentrations, over a short-term period) and chronic (repeated or continuous administration at lower concentrations, over an extended period) exposures. While organ-on-a-chip models have previously been used for mechanism of action validation (efficacy) and acute toxicity screening, they have not been suitable for long-term studies due to short half-lifes, lack of organ-organ communication, and outcomes that are difficult to extrapolate to human organ functions.

The Hesperos system overcomes these limitations with a model that allows interaction between its tiny organs, cultured in a serum-free blood surrogate solution from real human cells, in a way that realistically replicates system body responses to any compounds introduced to it. It can also non-invasively evaluate the electrical activity of neurons and cardiac cells, as well as the mechanics of cardiac and skeletal muscle contractions. Such monitoring of cellular function is crucial in chronic toxicity testing as it emulates in vivo function.

“We have created a valuable tool to model the pharmacokinetics and pharmacodynamics profile of known drugs, in line with ICH (International Council for Harmonisation of Technical Requirements for Pharmaceuticals for Human Use) guidelines,” Hickman added. “In the future, it could also be used to generate mechanistic models to predict the outcome of unknown drugs, and in other precision medicine applications.”