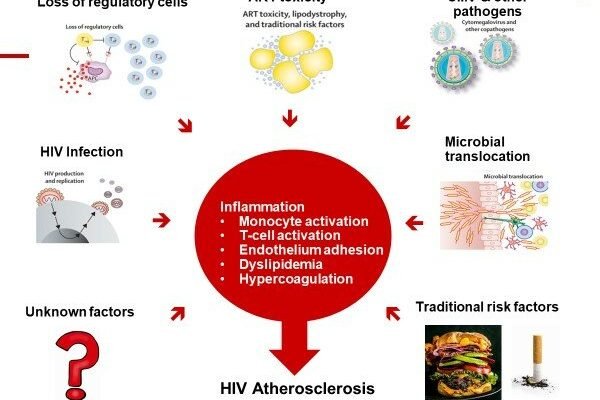 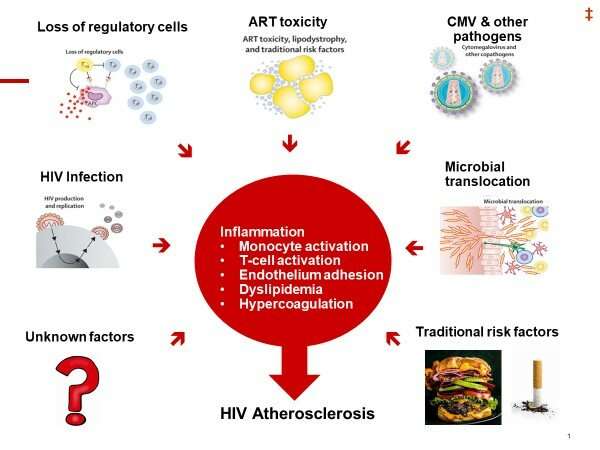 Since the advent of effective antiretroviral therapy (ART), human immunodeficiency virus (HIV) infection has become more like a chronic illness. Now that patients are able to live longer and remain free of developing AIDS, they have begun to encounter new risks from age-related disorders common in the general population, including cardiovascular disease (CVD).

Who is best suited to treat these patients is not clear, since HIV specialists may not have the expertise to manage CVD, and cardiologists may lack adequate training in understanding HIV-related disease processes or treatments. To address these gaps in clinical care, the latest issue of the Canadian Journal of Cardiology presents up-to-date guidance for cardiologists and other clinicians who treat this growing and challenging patient population.

“Survivors of the AIDS epidemic face a variety of new threats to their health, including an increased risk of diabetes, chronic kidney disease, cancer, bone diseases, neurocognitive disorders, and CVD, due to the cumulative effects of exposure to HIV, prolonged immune suppression, chronic inflammation, and the adverse effects of ART,” explains David D. Waters, MD, Division of Cardiology at Zuckerberg San Francisco General Hospital and the Department of Medicine of the University of California, San Francisco, CA, USA.

According to the Centers for Disease Control and Prevention, an estimated 1,122,900 adults and adolescents were living with HIV in the United States by the end of 2015. Of those, 162,500 (15 percent) had not received a diagnosis. Worldwide, an estimated 35 million people have HIV. Although deaths from AIDS-related illnesses have declined dramatically since the 1990s, deaths from CVD in people with HIV have more than doubled over the past two decades. Studies have shown a two-fold greater risk of myocardial infarction (MI) for persons with HIV even after adjusting for CVD risk factors. As more HIV patients age, cardiologists’ services will be in even greater demand.

Cardiologist Priscilla Y. Hsue, MD, University of California, San Francisco (UCSF), Zuckerberg San Francisco Hospital, San Francisco, CA, USA, discusses mechanisms of cardiovascular disease in the setting of HIV infection. According to Dr. Hsue, the types of CVD occurring in HIV have shifted over the years from pericardial effusion and dilated cardiomyopathy to conditions such as atherosclerosis, arrhythmic complications, and heart failure. Factors that contribute to the pathogenesis of CVD in HIV include a preponderance of traditional risk factors (such as hypertension, lipid abnormalities, cigarette smoking, metabolic syndrome, diabetes, and chronic kidney disease), leaky gut and microbial translocation, T-cell activation and cytomegalovirus coinfection, chronic inflammation, platelet abnormalities, and side effects from antiretroviral therapy.

Even in the setting of effectively treated HIV infection, HIV-associated factors are strong contributors to CVD; for example, an association exists between chronic inflammation and CVD in both HIV and non-HIV patients. Dr. Hsue discusses evidence regarding the effectiveness of anti-inflammatory medications in reducing CVD events. She also makes the important point that persons living with HIV represent a unique model of chronic inflammation and thus, “findings gleaned from studies in HIV patients can help to identify anti-atherosclerotic targets that may benefit broader populations.”

Dr. Hsue believes that the cellular mechanisms that underlie “ordinary” atherosclerosis may be amplified in HIV patients. “On a molecular level, monocytes/macrophages, platelet reactivity, and immune cell activation may be heightened in the setting of HIV and contribute to HIV-associated atherosclerosis.” She also cites evidence that HIV-related atherosclerosis is structurally distinct from atherosclerosis in non-HIV individuals. 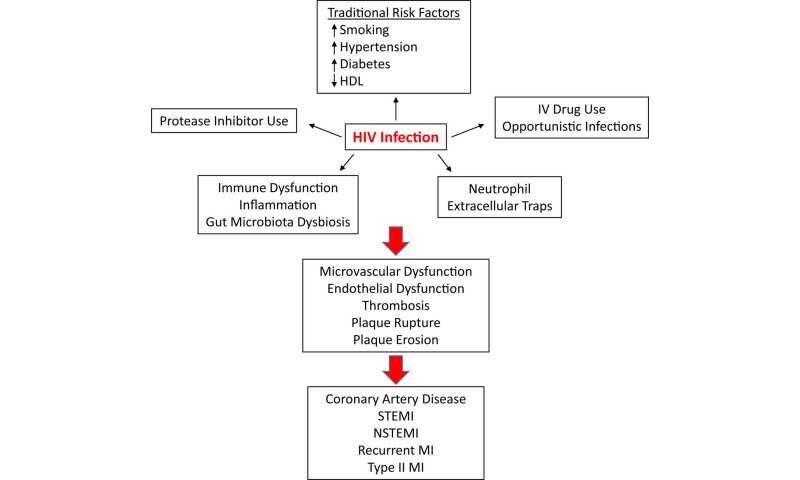 “Inflammation is now recognized as an important factor in cardiovascular disease, however, the reason for increased inflammation in patients who develop heart disease, especially in those living with HIV, remains unclear,” notes Dr. Sinha, Division of Cardiology, Department of Medicine, Northwestern University Feinberg School of Medicine, Chicago, IL, USA. “Despite treatment with antiretroviral therapy that eradicates the HIV virus from the blood, low levels of the virus remain active in the intestines leading to changes in the intestinal lining and bacteria. How these changes lead to increased inflammation and heart disease is an important area of research as it can have broader implications for the population at large.”

Numerous studies have shown increased plaque buildup and heart attacks in people living with HIV. This is despite the fact that the vast majority are well treated with ART. During the initial years of ART, some HIV medications were thought to be the reason behind this increased risk because they would cause weight gain, high cholesterol, and triglycerides. While this was a valid concern, current ARTs do not have those side effects. However, the increased CVD risk remains. “We are learning that even after suppression of the virus in the blood with these newer agents, there is increased inflammation and changes in the immune system that put these individuals at a higher risk of heart attacks. The HIV virus still hides in certain parts of the body such as the intestines likely leading to these problematic changes,” notes Dr. Feinstein, Department of Preventive Medicine, Northwestern University Feinberg School of Medicine, Chicago, IL, USA.

The authors also delve into differences in the presentation and outcomes of CAD and acute coronary syndrome between HIV-infected and non-infected patients, including lower age at presentation, more non-calcified plaque, increased risk of 30-day in-hospital mortality and recurrent MI, and higher risk of ST-segment elevation MIs, and the higher risks observed in women vs. men with HIV.

The authors emphasize the importance of early and continuous ART therapy in reducing CVD risk and find that many risk estimation tools developed from general populations underestimate CVD risk in HIV patients. “We also have to become better at predicting the risk of future cardiovascular events in people living with HIV so that we can identify who will benefit from starting therapies that are already available,” comments Dr. Sinha.

This special issue also includes reviews on other cardiovascular concerns for patients with HIV, such as stroke, heart failure, pulmonary hypertension, and arrhythmias. Dr. Timothy Ryan and colleagues consider the role of vascular imaging in the risk assessment of people with HIV. Dr. Pierre Gigere provides an in-depth description of potential drug-drug interactions between ART and CV medications, which is especially important when treating patients who take multiple drugs and have several comorbidities. Dr. Bobby Yanagawa discusses cardiac surgery in HIV patients, including protective measures for the surgical staff.