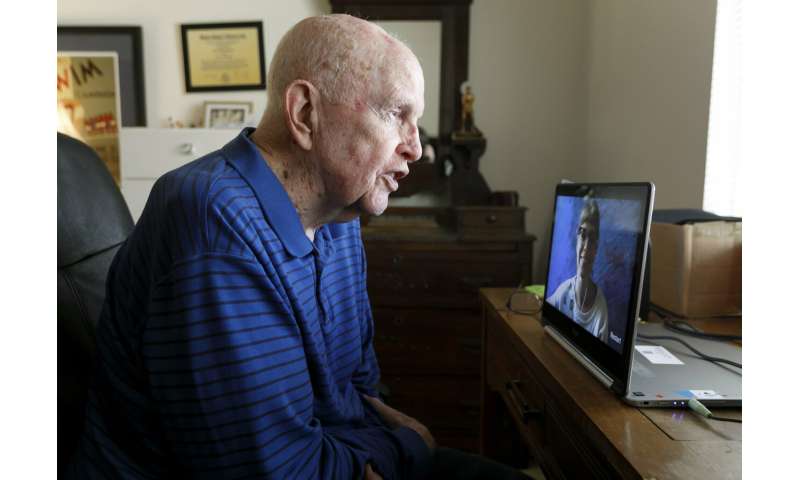 Right now, Gene Gilmer is as sharp as ever at 90 years of age.

A retired school superintendent who earned his doctorate in math decades ago, Gilmer lives alone and worries about losing the memories that defined his life. That’s part of the reason he enrolled in an unusual clinical trial through OHSU in Portland, Oregon.

The treatment being tested: Conversation.

Four times a week for a half-hour each time, he taps a button on a tablet computer and talks face-to-face with a research assistant. The conversation is invariably pleasant, always a half hour in length, and curiously themed.

“A lot of the questions seem to reflect back to when I was a lot younger,” he said. “They seem to be testing my memory.”

Testing—not quite. But targeting? Definitely. Researchers at OHSU are conducting a study to see if regular conversation can stave off dementia.

“This could be an actual clinical intervention your doctor would prescribe—like exercise for a healthy heart,” said Jacob Lindsley, a senior research assistant in the OHSU Layton Aging and Alzheimer’s Disease Center who is coordinating the study.

Social isolation is a major problem for seniors. A recent report by the Lancet Commission noted that 2.3 percent of dementia cases could be prevented by reducing social isolation.

Researchers, funded by a grant through the National Institute on Aging, are recruiting a total of 288 seniors at risk for cognitive decline—half in the Portland area and half in Detroit, Michigan. The study participants must be at least 75 years of age and living alone with a limited social network.

The principal investigator is Hiroko Dodge, Ph.D., a professor of neurology in the OHSU School of Medicine.

As Gilmer discovered, the conversations aren’t just shooting the breeze.

Research assistants lead participants through conversations that are specifically designed to exercise areas of the brain associated with abstract thought, memory and higher-level executive functioning skills.

On one recent day, research assistant Avery Richardson asked Gilmer whether he likes to watch television. The conversation led into some of the radio programs he heard as a kid—The Lone Ranger” was a highlight—before the discussion wound its way back to the Super Bowl held the day before their conversation.

Richardson: “Let’s think of the Super Bowl versus the fourth week of the regular season: Do you think the time of year has an affect on the way the players compete?”

Gilmer: “I’m probably of medium knowledge in football, but it seems to me there are fewer penalties and it seems more intense. You get the feeling they’re paying more attention to what they’re doing.”

The conversation drives Gilmer to think more deeply than he would in otherwise ordinary chitchat.

Dodge and her fellow researchers demonstrated in a 2014 pilot study that seniors who participated in video chats significantly improved in some cognitive tests—compared to a control group that did not engage in video chats.

The full clinical trial has been underway since the fall of 2018, and will continue recruiting participants through fall of next year. The idea is to identify healthy but socially isolated seniors and see whether regular conversation staves off age-related cognitive decline. Researchers assess all participants’ memories at the beginning and end of the study, and some participants also complete magnetic resonance imaging (MRI) and testing for a gene associated with Alzheimer’s disease.

Each participant interacts with trained conversationalists 30 minutes a day, a few times per week for about a year. A control group has weekly 10-minute phone calls with study staff to monitor their social activities and health conditions.

For his part, Gilmer said he’s happy to participate.