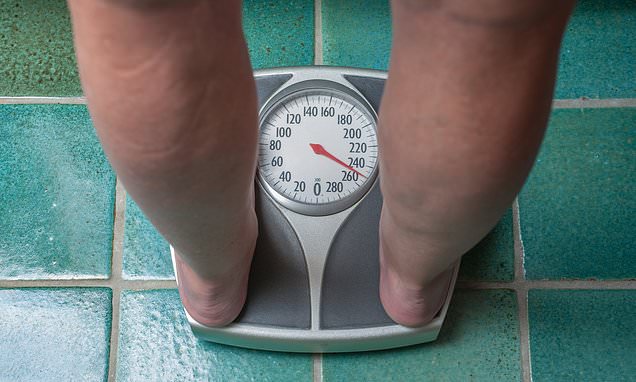 LOSING weight in middle age might RAISE the risk of Alzheimer’s, study suggests

Losing weight in middle age has been linked to an increased risk of Alzheimer’s.

Being obese or overweight has long been known to raise the risk of dementia and older people are advised to stay slim to ward off the condition.

But researchers from Boston and China found that adults who lost body mass in their mid-life years had an increased risk of developing dementia later on.

They are calling for the ‘unexpected’ finding to be studied further to make sure other lifestyle factors are not responsible for the increased risk. 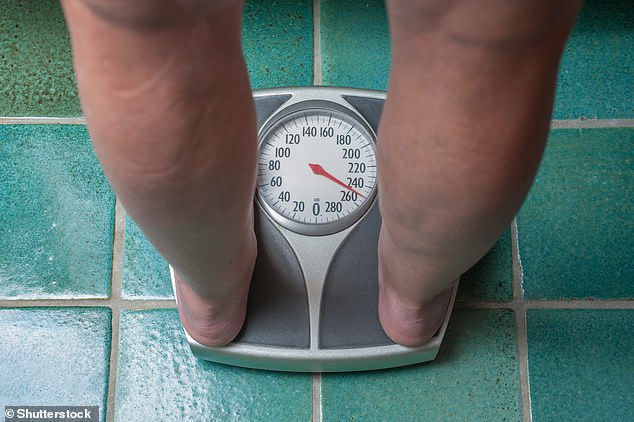 The researchers identified a subgroup with a pattern of initial increasing BMI followed by declining BMI. Both occurred within middle age – which appeared to be central to the declining BMI-dementia association

Lead study author Professor Rhoda Au, of the University of Boston, said: ‘If after a steady increase in weight that is common as one gets older, there is an unexpected shift to losing weight post midlife, it might be good to consult with one’s healthcare provider and pinpoint why.’

The findings add to evidence that the seeds for dementia are sown across many years – likely even across the entire lifespan.

Is THIS why women are twice as likely to get dementia as men? 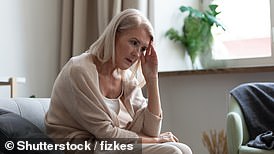 Scientists found changes that happen during the menopause release the brakes on a protein that causes inflammation in the brain.

Almost 10 per cent of US adults ages 65 and older have dementia, while another 22 per cent have mild cognitive impairment, according to Columbia University researchers.

Dementia is a global problem affecting 50 million people and is expected to rise dramatically to more than 150 million cases worldwide by 2050.

Obesity, meanwhile, is responsible for some of the leading causes of preventable, premature death, including heart disease, stroke, type 2 diabetes and certain types of cancer. Roughly 42 percent of adults 20 and over were obese in 2017 through March 2020.

The US and Chinese team analysed data from the Framingham Heart Study, a group of participants from the Massachusetts town followed for four decades.

Their weight was measured about every two to four years. Prof Au and colleagues compared demnetia rates among those whose weight went up, down or remained stable.

Prof Au said: “These findings are important because previous studies that looked at weight trajectories didn’t consider how patterns of weight gain/stability/loss might help signal that dementia is potentially imminent.”

The researchers found the overall trend of declining BMI was associated with a higher risk of developing dementia.

However, after further exploration, they identified a subgroup with a pattern of initial increasing BMI followed by declining BMI. 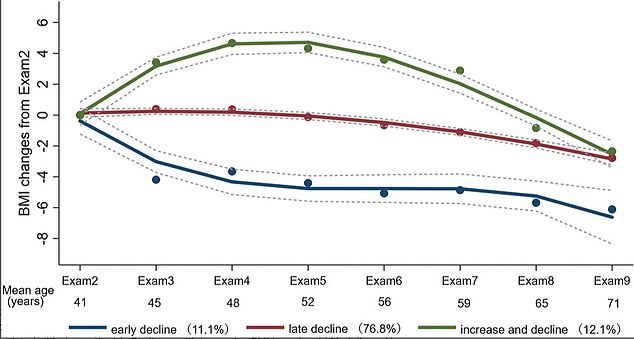 Both occurred within middle age – which appeared to be central to the declining BMI-dementia association. The results appear online in Alzheimer’s & Dementia: The Journal of the Alzheimer’s Association.

The results should not be interpreted as an endorsement to put on extra pounds.

Obesity is tied to a litany of health issues including high blood pressure and cholesterol, inflammation, and cardiovascular death.

It raises the risk of heart disease, which kills 647,000 people every year in the US – making it the number one cause of death. Obesity has also been linked to 12 different cancers.

Obesity is defined as an adult having a BMI of 30 or over.

A healthy person’s BMI – calculated by dividing weight in kg by height in meters, and the answer by the height again – is between 18.5 and 24.9.

Among children, obesity is defined as being in the 95th percentile.

Percentiles compare youngsters to others their same age.

For example, if a three-month-old is in the 40th percentile for weight, that means that 40 per cent of three-month-olds weigh the same or less than that baby.

Around two in five men and women in the US are obese.

The condition costs the US healthcare system around $173billion a year.

This is due to obesity increasing a person’s risk of a number of life-threatening conditions.

Such conditions include type 2 diabetes, which can cause kidney disease, blindness and even limb amputations.

Obesity also raises the risk of heart disease, which kills 647,000 people every year in the US – making it the number one cause of death.

Carrying dangerous amounts of weight has also been linked to 12 different cancers including breast.

Among children, research suggests that 70 per cent of obese youngsters have high blood pressure or raised cholesterol, which puts them at risk of heart disease.