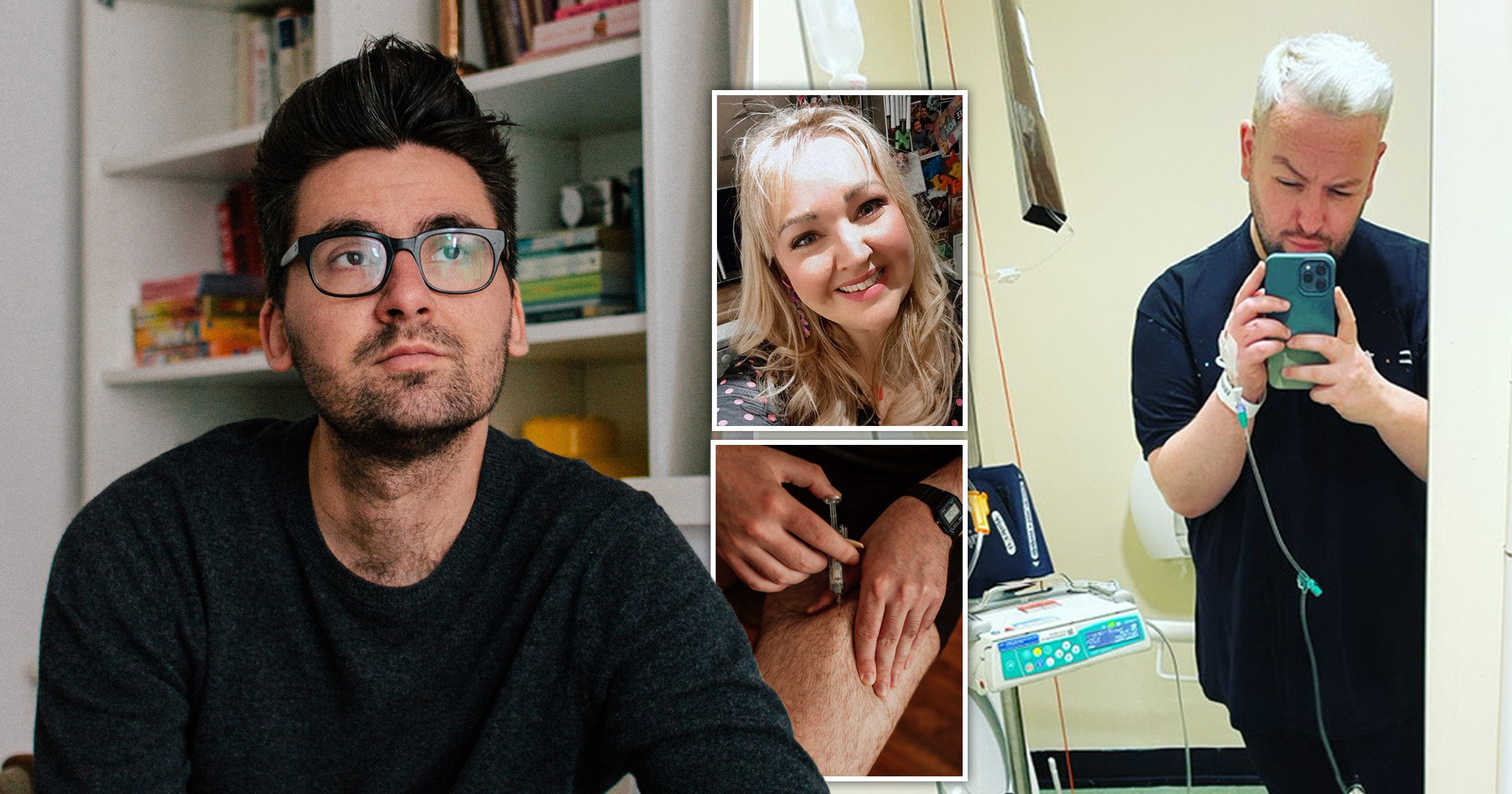 ‘No two days are the same living with colitis, you never know when you wake up what sort of day it’s going to be,’ says 30-year-old James Conlon.

To mark Crohn’s and Colitis Awareness Week (December 1-7), we’re hearing what it’s like to live with the conditions first-hand – particularly as a young person.

The two conditions are both forms of Inflammatory Bowel Disease (IBD) and are often life-long, with periods of good health (remission) as well as flare ups.

Both Crohn’s and colitis can affect anyone, at any age. James was diagnosed with colitis when he was 21 – after noticing something wasn’t right on a family holiday.

‘I was vomiting, constantly glued to the toilet and I noticed blood in my stools – I knew something wasn’t right,’ he tells Metro.co.uk.

‘The whole holiday was a shambles for me as I wasn’t feeling well at all.’

Once back in the UK, James was referred to his local hospital for investigations and was diagnosed with ulcerative colitis.

‘My diagnosis was part relief, part fear of the unknown – as I had never heard of ulcerative colitis before,’ he adds.

James now visits the hospital every eight weeks to get medication – which he’s been on for four years, after other treatments failed.

But he still battles with the unpredictable nature of colitis.

He continues: ‘I still struggle with fatigue and feeling constantly drained and tired. You never know when you might flare up, day to day life with colitis is unpredictable.

‘Often people don’t understand because they can’t see “colitis” – it’s an invisible illness. I wish people knew the physical and mental pain you and your body can go through, it’s life-changing.’

This is something also championed by 35-year-old Ruth – who lives with colitis.

‘Coming to terms with a chronic illness in my early thirties has been challenging. It’s given me the opportunity to grow in ways I didn’t consider beforehand,’ she tells Metro.co.uk.

‘I consider myself lucky to have experience and understanding of living with an invisible disability. I can bring things to the table, like compassion, flexibility, an understanding of coping techniques and a strong belief in equality and inclusion.’

What’s the difference between Crohn’s and colitis?

Ulcerative colitis and Crohn’s disease are the two main forms of inflammatory bowel diseases. They are both conditions characterised by chronic inflammation of the digestive tract. And although they share many similarities, there are key differences between the two diseases.

Ulcerative colitis affects only the large intestine. But in Crohn’s disease, inflammation can appear anywhere in the digestive tract, from the mouth to the anus.

Also, in Crohn’s disease, there are healthy parts of the intestine mixed in between inflamed areas. Ulcerative colitis, on the other hand, is continuous inflammation of the colon.

Ruth has always had some form of abdomen pain – from as far back as she can remember. But it was when she was pregnant with her eldest son that she started noticing it getting worse.

The longer Ruth’s pregnancy went on, the worse her symptoms became – sometimes having uncontrollable accidents up to 14 times a day, which she describes as being ‘incredibly embarrassing and degrading’.

Shortly after the birth of her son, Ruth was diagnosed with ulcerative colitis and has received various drugs and medications to treat it ever since.

Ruth says that her diagnosis gave her a ‘sobering reality check,’ particularly as someone who likes to be busy within her community – as both the physical and emotional impact of colitis takes a huge toll on her life.

She adds: ‘While the physical symptoms of colitis are often staggering, the sheer determination and strength needed within, to get through life as it now is – with very different boundaries on time, energy and focus – is what I have found the hardest.

‘It’s a grief, to the adjustments and sacrifices I’ve had to make to ensure I can be the best version of myself, without overdoing it, which will inevitably impact on my health. Despite being in remission, I still suffer with fatigue, which I find the hardest challenge.

‘I also have to be vigilant with hygiene, so that I don’t pick up bugs. The adjustments and support my husband has had to make, in particular, have been many and I am very lucky to have him and some brilliant friends who help often.

‘I often find myself overachieving to compensate for any shortcomings of my IBD diagnosis – but surrounding myself with the right people, work place and self-belief, enables me to be kinder to myself and manage my symptoms.’

Ruth hopes that more people, of all ages, become more aware of their bowel habits. Particularly considering that bowel disease affects one in 210 people in the UK and, if left untreated, it can significantly increase the risk of bowel cancer.

But she also wants to reassure anyone going through a diagnosis.

‘If you have been diagnosed with IBD, it is so important to know that you are still attractive, worthy and wanted despite how rubbish this condition can make you feel.’

While both colitis and Crohn’s are very similar, the former affects large bowel only, while the latter covers both the small bowel and large bowel.

Filmmaker Riccardo Servini was 20 years old when he was diagnosed with Crohn’s disease.

Now 35, he takes an injection once a week and daily pills, which aim to stop him having flare ups. Over the years, he’s been on different medications that have had various effects on his mood and mental state.

This is one of the knock-on effects of Crohn’s disease that Riccardo says he struggles with.

He explains: ‘When I’m in remission I can get on with my life fairly normally but I get pretty bad joint pain. If I have a flare up, then it differs from being so bad I can’t get out of bed to just moving through the pain.

‘The hardest thing is, whether I’m in remission or not, it’s always on the back of your mind – so the mental struggle is prominent. I have a constant worry that I’ll get a flare up, as it can be so random, and that makes me incredibly anxious which can sometimes be crippling.’

Riccardo hopes for more awareness around the disease and is even making a film to shine a light on what it’s like living with Crohn’s – as well as various other chronic and invisible illnesses.

He adds: ‘I think the most common misconception is that because it’s a bowel disease, people think it can just be fixed with diet or that it’s just a poo problem – but that’s not it at all. It can pretty much have an effect on your whole body, both physically and mentally, and if untreated it can be incredibly damaging.

‘For people who have Crohn’s or any other kind of autoimmune disease, we will all have different experiences and be on our own journeys.

‘If you get diagnosed, thankfully, with the internet now, you can easily find people going through similar situations. I encourage you to talk to them but always remember it’s your body and mind and you can find what works for you.’

What are the main symptoms of IBD?