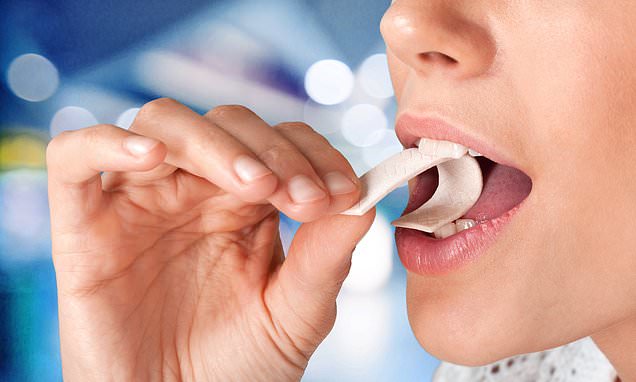 You should chew sugar-free gum after meals to prevent your teeth from rotting, scientists say.

Researchers scoured 50-years’ worth of studies and found sugar-free chewing gum reduced the risk of tooth decay by 28 per cent.

It works by causing the mouth to produce more saliva, which helps neutralise and rinse away acid that forms when we eat. These acids typically stick around in the mouth and teeth for 20 minutes after a meal.

Chewing gum with sugar can also trigger an increase in saliva but sugar rots teeth, turning into plaque when it reacts with bacteria in the mouth.

They are both thought to increase the production of proteins in the immune system that fight off the germs that rot teeth. 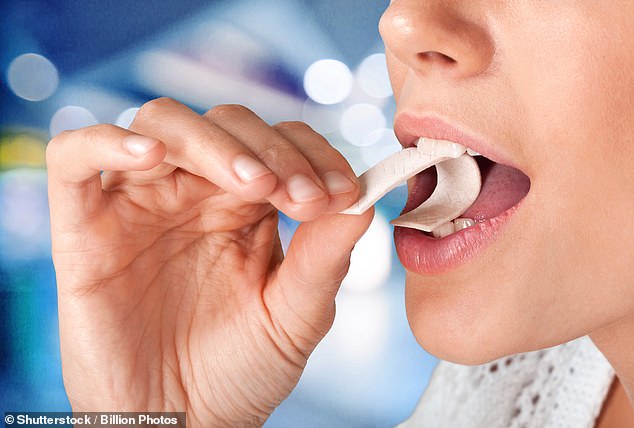 Chewing sugar-free gum does prevent your teeth from rotting, scientists have concluded (file)

The effect of sugar-free variants has been fiercely debated. Studies have shown it can fend off painful cavities if chewed closely after meals.

But others have suggested sugar-free gums with fruit flavourings can erode dental enamel – the tooth’s hard protective coating.

They identified 12 papers which explored the impact of chewing sugar-free gum on oral health conditions in children and adults.

The review found people who used sugar-free gum were 28 per cent less likely to develop cavities compared to people who didn’t chew gum at all.

The findings, which were published in the Journal of Dental Research, are the first to conclusively show gum’s positive effect.

The scientists say the method could eventually be recommended by the NHS as a way to protect the teeth of people who are at risk of developing cavities.

Lead author Professor Avijit Banerjee said: ‘Both the stimulation of saliva which can act as a natural barrier to protect teeth, and the mechanical plaque control that results from the act of chewing, can contribute to the prevention of dental caries [cavities].

‘Sugar-free gum can also act as a carrier for antibacterial ingredients including xylitol and sorbitol.

‘No recent conclusive evidence existed prior to this review that showed the relationship between slowing the development of caries and chewing sugar-free gum.’

He told MailOnline: ‘It plays a really important role in preventing tooth decay, especially in between or after meals, when your teeth are more at risk of acid attacks.

‘Tooth decay remains one of the most common health problems in the UK. Over half the adult population has at least one decayed and damaged tooth.

‘The consequences can range from a filling, to root canal treatment, or finally removing the tooth altogether. Not only is this course of action invasive, but it can also be potentially costly.

‘In addition to chewing sugar-free gum, the best way to prevent tooth decay is by brushing your teeth thoroughly last thing at night and at least one other time during the day, with a fluoride toothpaste.’

It comes after NHS figures published in September revealed tooth decay now lands children in hospital more than twice as often as tonsillitis.

There were 25,702 hospital admissions for tooth decay among five to nine-year-olds in England in 2018-19.

In comparison, only 11,811 admissions were needed to treat tonsillitis – the second most common problem on the list.

Surgeons warned the hospitalisations are ‘unacceptable’ and children are eating too much sugar and not taking care of their teeth well enough.

How BLUEBERRIES can lower the risk of tooth decay

Researchers at the University of Queensland tested extracts of cranberry, blueberry and strawberry on mouth bacteria.

The study in January found significant reductions with cranberries and blueberries, according to the results in the journal Oral Sciences.

Dentists urged manufacturers of mouthwash and toothpastes to start using blueberries in their products. 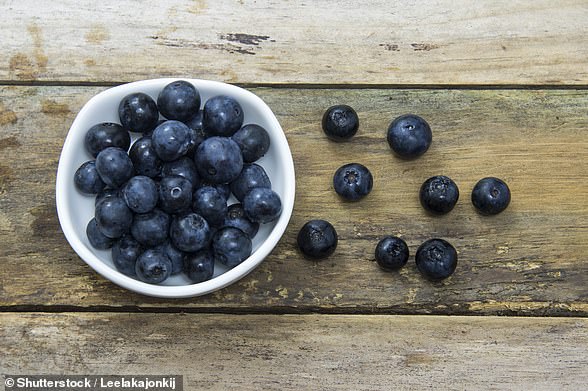 The Oral Health Foundation claimed the fruit, and cranberries, both seem ‘especially good for oral health’.

It comes after scientists found the berries can reduce the risk of tooth decay by lowering the activity of bacteria in the mouth.

Fruits such as these are a rich source of polyphenols which are antioxidants, already known to protect against free radicals in the body.

Dr Nigel Carter, chief executive of the OHF, is now calling for the dark berries to become an ingredient in dental products such as mouthwash.

He said the ‘polyphenols stick around in our saliva and will continue to help our mouth, even after we’ve swallowed them’.

Mr Nebu Philip, lead author from the School of Dentistry in The University of Queensland, suggested the fruits could be used as a ‘natural weapon’ in the fight against cavities.

A report issued by the OHF today suggested eating a handful of such berries a day could reduce oral health issues.

This is easier with blueberries which can be eaten raw with breakfast cereal or in yoghurt, for instance, as many find the taste of cranberries too tart, they said.