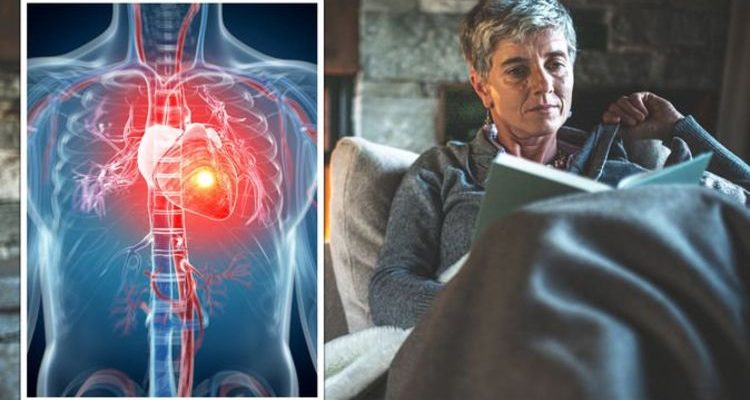 The British Heart Foundation last year warned of a surge in ‘excess death’ from heart diseases. Such diseases include heart attack, which is characterised by sudden chest pain, or discomfort which may feel like pressure, tightness or squeezing. Experts believe the rise in numbers is largely attributable to expanding waistlines coupled with a drop in individuals seeking care. Adopting one simple habit, however, could protect the heart against the life-threatening condition.

Researchers have warned of the perils of cold weather for the heart, as a drop in temperatures often confers higher prevalence in heart attacks.

It has long been known that our bodies burn brown fat to produce extra heat to keep us warm.

Scientists, however, have found that this process could have a dangerous side effect.

Studies have found that exposure to cold conditions can lead to a thickening of the artery walls, which in turn can hike the risk of heart disease.

Yihao Cao, at the Department of Microbiology, Tumour and Cell Biology at Karolinska Institute, said: “At first, we thought that the cold activation of brown fat would only make the mice thinner and healthier.

“Instead, we found that they ended up having more fat stored in the blood vessels.

“This came as a surprise and was the opposite of what we thought would happen.”

The researchers determined that exposure to low temperatures accelerated the formation of atherosclerotic plaque in the mice, which is a known trigger for myocardial infarction – or heart attack – and brain haemorrhaging.

For the study, the team created genetically modified mice that were especially prone to atherosclerosis.

When the mice reached the age of eight weeks, they were split into two groups, one of which was kept in temperatures of 30C while the other other was exposed to colder temperatures, at 4C.

Researchers observed that colder conditions prompted the conversion of white fat into brown fat, which produces heat as it is broken down.

This breakdown, according to a study, can release fatty acids and glycerol that stimulate the liver to make low-density lipoprotein – or “bad” cholesterol – which can clog arteries.

As LDL cholesterol is deposited in the arteries, a build-up of plaque can eventually obstruct blood flow to the heart, triggering a heart attack.

To further test the causal link between heart generation and LDL production, researchers created atherosclerosis-prone mice that were unable to use their brown fat to produce heat.

Findings revealed that this group of mice did not see an increase in LDL production or any of the consequent arterial problems.

Finally, five people with high levels of LDL cholesterol were recruited and exposed to temperatures of 16C for four hours over two days.

Unsurprisingly, these participants showed higher LDL levels in their blood after the trial than before.

Professor Yihai Cao, added: “If this is also true for humans it might be wise to recommend that people who suffer from cardiovascular disease should avoid exposure to the cold and to put on warm clothes, when they are outside during the winter.

It would be an extremely important discovery if we found this to be the case in humans too.

“Brown adipose tissue is affected not only by the cold, its activation can also be blocked by several existing drugs, something that we would like to study further.”