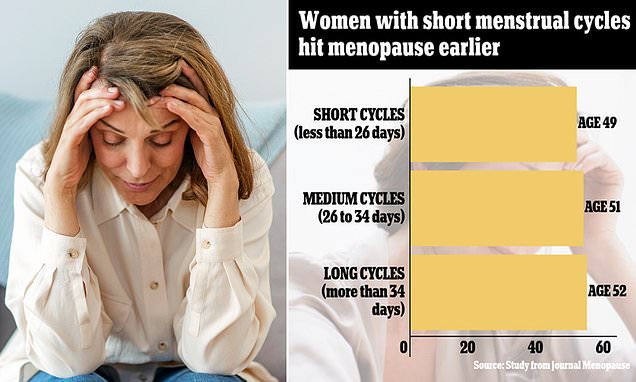 Women who have shorter menstrual cycles start menopause two years earlier than others and face the most symptoms in midlife, a study has found.

Researchers led by Harvard Medical School monitored 600 women from the ages of 33 to at least 51 years old, and asked them to self-report symptoms of menopause and when their cycles stopped.

Those with shorter cycles — less than 26 days — hit menopause at age 49 on average, the study found, while those with normal cycles — from 26 to 34 days — reached it at about 51 years old. Women with shorter cycles were also more likely to report symptoms including sleep and heart problems, and depression.

Scientists behind the paper said the age at menopause — when the menstrual cycle stops — was a good marker of overall health. They called for more research into the topic to establish the health impacts of a shorter cycle.

It comes after a doctor warned that earlier menopause could shorten a woman’s lifespan because it shifts the hormone balance, sparking a more rapid decline — and raising the risk of conditions including heart disease, stroke and arthritis. 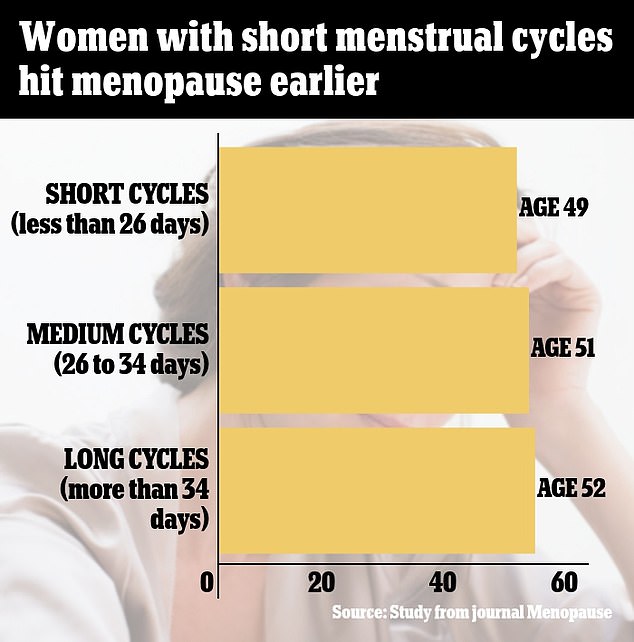 The above graph shows the results from the study. It reveals that women who have shorter menstrual cycles hit the menopause at age 49 on average, while those with normal cycles — from 26 to 34 days — reach it at age 51 years 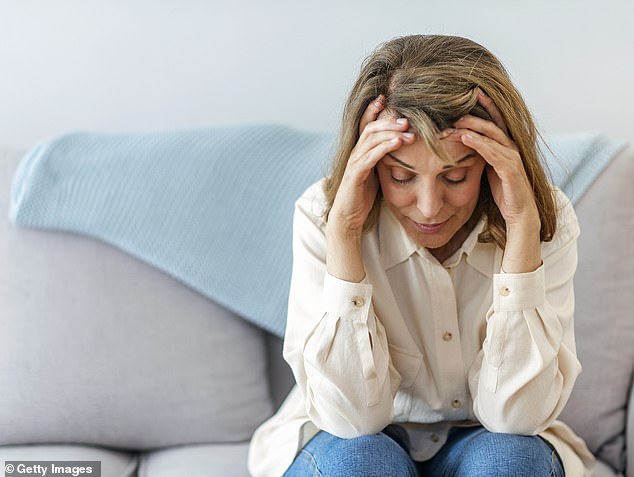 Researchers led by Harvard Medical School monitored 600 women from the ages of 33 to at least 51 years old, and asked them to self-report symptoms of menopause and when their cycles stopped (stock image)

For the study, published this week in the journal Menopause, scientists recruited women within their first 22 weeks of pregnancy at clinics in Massachusetts between 1999 and 2000, and asked them to report the length of their menstrual cycle.

About 72 percent of participants were white, and 80 percent had obtained a college degree.

Menopause is defined as the changes a woman goes through just before and after she stops her periods and is no longer able to get pregnant naturally.

Some women go through this time with few, if any, symptoms, around 60 percent experience symptoms resulting in behavioral changes and one in four will suffer severely.

Menopause happens when your ovaries stop producing as much of the hormone estrogen and no longer release an egg each month.

American experts say women go through menopause at the age of 51 years on average, although it can begin when someone is anywhere between 40 and 58 years old.

About 18 years later — the midlife point — they were asked to return to report whether they were suffering any symptoms and the age at which they reached menopause.

Cycle length, symptoms and the age of menopause were self-reported, meaning they were not independently assessed by a doctor.

Results showed women with shorter cycles were about 67 percent more likely to experience an early menopause than those with normal cycles.

Those with longer cycles took the most amount of time to reach menopause, hitting it at about 52 years old on average.

Women with shorter cycles also reported the most menopause symptoms at midlife on average compared to the other two groups.

They were also more likely to say they had exhaustion (52 percent), hot flashes (38 percent) and muscle problems (14 percent).

The study also found women with shorter cycles were less likely to be white, have a college degree or a household income above $70,000 per year.

Dr. Lidia Minguez-Alarcon, the human fertility researcher who led the study, and others said: ‘We observed that women with short menstrual cycles during reproductive years had a higher frequency of total menopausal symptoms… and an earlier age of natural menopause at midlife.

‘Using the menstrual cycle as an additional vital sign adds a powerful tool to the assessment of physical and mental health.’

Menopause is a natural part of ageing, with symptoms emerging up to ten years before cycles stop.

To help ease these symptoms, doctors recommend getting plenty of rest, eating calcium-rich food like milk and exercising regularly. They also say it is important to talk to others going through the same thing.

But women can also be offered patches to help boost levels of hormones that the body stops manufacturing during menopause.

It comes after an expert suggested that delaying menopause could prolong a woman’s lifespan because the hormonal changes it triggers lead to faster aging across the body.

Speaking at the Life Itself conference in San Diego, California, she said that women who begin menopause in their 40s rather than around 51 years old, the average age, likely age faster than their peers.

Garrison said: ‘When a woman is in her late 20s or early 30s, the rest of her tissue is functioning at peak performance, but her ovaries are already showing overt signs of aging.

‘Yet most women learn about their ovaries and ovarian function when they go to use them for the first time, and find out they’re geriatric.

She added: ‘Studies show women who have later menopause tend to live longer and have an enhanced ability to repair their DNA.