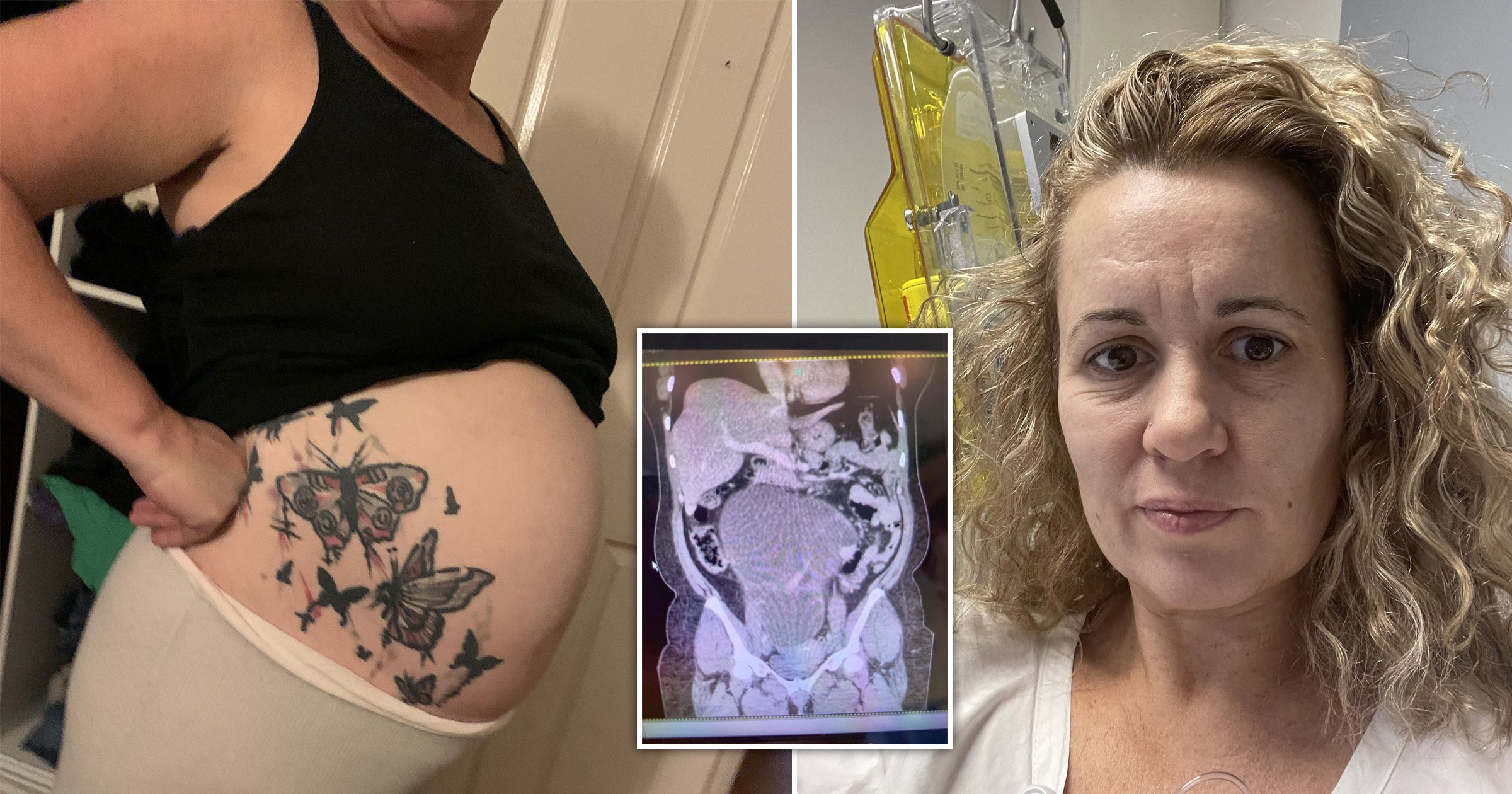 ‘My whole life was flashing before my eyes,’ recalled 44-year-old Jayde Martin.

She had just found out that her painful, swollen and bloated tummy was not the result of weight gain, as she’d assumed, but was actually caused by an ovarian cyst the size of a watermelon.

Jayde noticed her belly getting larger after she injured her hand on Christmas day, which kept her from her usually very active lifestyle.

However, when she began to feel pain so excruciating that she feared her appendix had burst, she went to the doctors.

‘My whole life revolves around being able to use my right hand – I ride horses and I’m quite active but I went from doing loads of stuff to nothing,’ said Jayde, from Darwin, Northern Territory, Australia.

She didn’t understand why she was ‘gaining weight’, but later found out that there had been a rumour floating around that she was pregnant.

‘I just kept putting it to the back of my mind and not doing anything about it because I was too concerned with my hand and work,’ she continued.

‘Then in March I had a couple of drinks with the girls after work and the next day I felt really, really gassy and bloated.

‘Online it said to massage your stomach so I was lying down doing that and then I went to move and literally screamed with pain.

‘It was a pain that I hadn’t felt except for being induced for labour, it was such a core pain I thought my appendix had burst and I needed it out.’

Jayde went to the hospital the following morning where she had a CT scan that revealed a giant ovarian cyst was taking up the majority of her abdomen.

‘The doctor showed me the photos of the CT scan and you literally can’t see my stomach because the whole thing is taken up by this tumour,’ she said.

‘The nurses said they hadn’t seen anything like it.

‘The risks were given to me quite clearly and that there was every chance it could be cancer but either way it was a giant mass that needed to come out.

‘My whole life was flashing before my eyes and I thought “oh my god I’ve got cancer, I’m going to die”.’

Surgeons ended up finding a second cyst on her right ovary and opted to perform a full hysterectomy and appendix removal to ensure all abnormal cells were gone.

Jayde was fine with this as she said the health anxiety she would feel over something like this happening again would be too much to handle.

The main cyst was 35 centimetres in length and weighed seven kilograms.

‘I was so shocked when I saw the photos,’ said Jayde.

‘When she said the red strips around it were my stretched fallopian tubes I thought: “oh my god no wonder I was in so much pain”.’

Jayde is still recovering and waiting to find out whether the cysts were cancerous.

But she says doctors have reassured her that they didn’t see any signs of disease in her remaining tissues and that larger masses are typically considered benign.

The mum-of-two is now warning other women to get checked straight away if they notice any unusual changes or symptoms and not to let a busy life get in the way of looking after your health.

She feels she ignored a lot of the early warning signs, such as three GPs being unable to insert a contraceptive coil into her cervix.

She says: ‘This could’ve been resolved a lot less aggressively and I wouldn’t have had to be sliced down my middle if I’d just done it a year ago.

‘There’s so many less invasive options if you don’t let it get to this point so it’s really important that people look after themselves and go and get tested.’