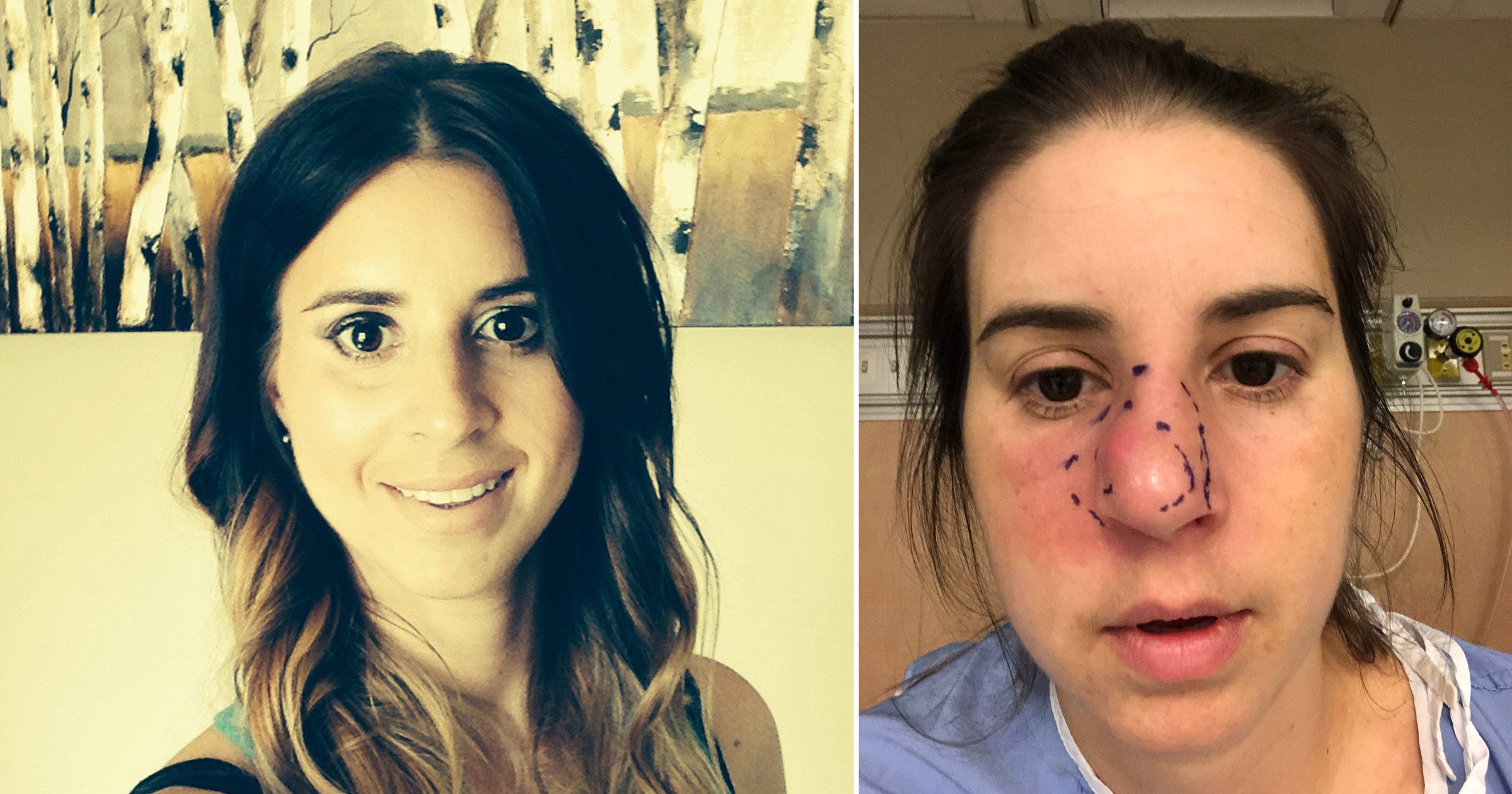 A woman who noticed her nostril was sore while washing her face was stunned to discover it was a tumour.

Trish Hawley, 42, from Huntsville, Canada, noticed an issue during the summer of 2019. She started to feel an occasional pain in her right nostril, but as the months progressed so did the pain.

Eventually, it was unbearable.

Doctors believed it was an infection but realised later it was a malignant tumour. They tried to treat it with radiotherapy but it didn’t work. It was then that Trish received horrible news – her nose would have to be removed.

The procedure, known as rhinectomy, would save her life but leave her with a disfigurement.

‘I’m not a vain person and don’t think much about looks, I knew I wasn’t unattractive but I did think about what this would mean for my identity,’ Trish explains.

‘But I was in so much pain by that point, I just wanted it gone. It was so bad when I turned up for the surgery. The doctor looked at it and said, “the tumour is angry.”’

‘I asked her if they would have to remove my nose, already knowing the answer, she then said “yes.”

I began to cry probably for a solid 10 minutes and the whole time she consoled me. The anxiety set in shortly after and I was nauseous and dizzy for a week.’

The first sign that something was wrong for the public health inspector was when she noticed some pain when she washed her face or caught her nose while getting dressed.

By September 2019, it was so bad, Trish decided to see a doctor. She claims that medical professional told her it was the result of a dry nose.

‘I was thinking it was no big deal at that stage,’ she recalls. ‘She thought it was something that would pass. I’m not a smoker, I don’t do drugs and I’m not a big drinker. Another doctor had said they didn’t think I was high risk.’

As the months passed, the pain grew and she was given antibiotics and other treatments but nothing helped. At Christmas time, Trish and her husband, Brian, had to travel to Halifax but were forced to return home early due to the pain in her nose.

‘My dog had jumped up and hit my nose a few times over Christmas and it was excruciating to the point where it brought me to tears,’ Trish says. ‘Something definitely wasn’t right. By that point, you could start to see something in my nose.

‘We had to come back early because it was just getting so bad.’

Trish was eventually referred to an ear, nose and throat specialist in January 2019. The sinus scan was normal but after an examination, the ENT doctor was concerned about her nostril. It seemed to be completely closed and a bump had formed.

The doctor believed it was a calcified cyst or blood clot and told her they would book her in for an appointment to remove it.

‘They told me they only had one surgery date a month and I was in so much pain, I couldn’t wait that long,’ she says. ‘I called the receptionist what felt like 1,000 times and I managed to get the only cancellation in February. We expected it to be a really simple procedure.

‘At the appointment, the doctor couldn’t get it to freeze and he ended up doing a biopsy. I remember him saying “wow it’s a tumour.”’

10 days later the doctor confirmed that she had cancer.

‘I can only remember bits and pieces of that,’ Trish says. ‘He was telling me I needed to go to Princess Margaret hospital in Toronto because it was my best chance of survival.

‘We were going to be starting fertility treatment at the time and he was telling me I needed to talk to them about that, that there might be chemo but definitely radiation, and they might have to remove my nose. I struggled to take it all in.’

Trish quickly started radiation treatment for six weeks. It was aggressive and after three months Trish would return to doctors to see if the tumour had shrunk.

Sadly, just two weeks after beginning treatment, her nose started becoming more painful again. Trish was called in for another biopsy. The test showed that the radiation hadn’t worked and the tumour was growing quickly.

Unfortunately, the only option left was to remove Trish’s nose.

‘The tumour grew in a way that he had to take quite a lot on the right side,’ she says. ‘I was expecting a little triangle wound site but ended up with this huge wound site.

‘It took a full year for the wound to heal. It usually takes three to six weeks.

‘My husband couldn’t see me for five to six months after the operation without a nose. It wasn’t because he thought I was ugly but it was just this huge reminder of what I went through, and it was right in the middle of my face.

‘I grew up in this town and everyone here knows me so people have been really supportive, but the town is also really touristy in the summertime so I did face people staring or laughing.’

‘After the surgery I was comfortable in public for many months because I had packed in so it looked like I just had surgery of some sort but still had a nose.

‘It wasn’t until I started wearing just a flat bandage and a mask that wouldn’t stay in place that you could tell I didn’t have a nose and that’s when I noticed more people staring and pointing.

‘It took many months before I could feel better in public even though the staring and comments persist to this day.’

In October 2021, Trish was fitted with a temporary prosthetic nose.

‘I went to my appointment to get a mould made on the wound site and then I went back a second time, and she had sculpted it out of wax and I put it on and just cried,’ she explains.

‘The anaplastologist making it was telling me it was premature and wasn’t done yet. In her eyes, it was very rough but it meant so much. I still get emotional about it now.

‘Getting my nose has been so amazing. It’s not just about looks but it means I can go out for a walk without being stared at or laughed at, and little things like being able to wear my glasses again.’

Since her surgery, Trish has been working with a Canadian charity called AboutFace who support people with facial differences.

‘I was included in a feature on their website and in a video campaign with them called Beyond My Face and it made me feel normal. It made me feel like I was going to be ok,’ she notes. ‘It gave me a piece back and made me feel more like myself.

‘They are an amazing resource for so many people and I found I was crawling around in the dark until I found them.’

She is also helping other patients who have had facial surgeries come to terms with what is happening.

‘The prosthetic clinic asked me to speak with someone who was going through something similar and was having a hard time,’ she adds.

‘They told me I was doing so well and was so positive about the experience. It meant a lot to be able to talk someone through that.’

Trish is currently having scans every six months and close monitoring to check for any signs of recurrence but is doing well.