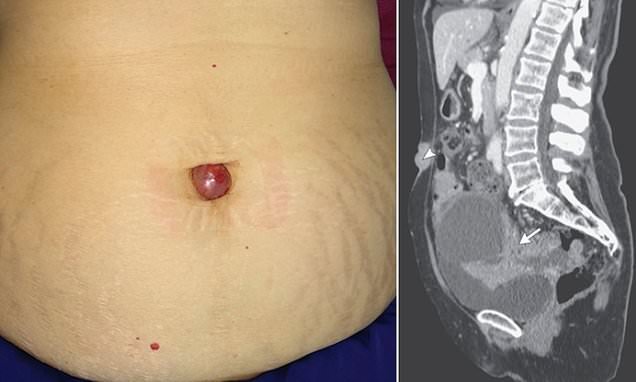 A 73-year-old woman was diagnosed with ovarian cancer after a bizarre red lump grew out of her belly button.

The woman – who has not been named – went to hospital when the ‘umbilical nodule’ became painful and grew to 2cm across over four months.

Scans later revealed she was also suffering from a 11x11cm tumour in her pelvis, which had spread to her belly button.

The red lump – known as a Sister Mary Joseph’s nodule – can occur with ovarian cancer but is ‘relatively rare’, doctors said.

The patient, from Spain, is said to have made a full recovery after undergoing chemotherapy and surgery to remove the mass. 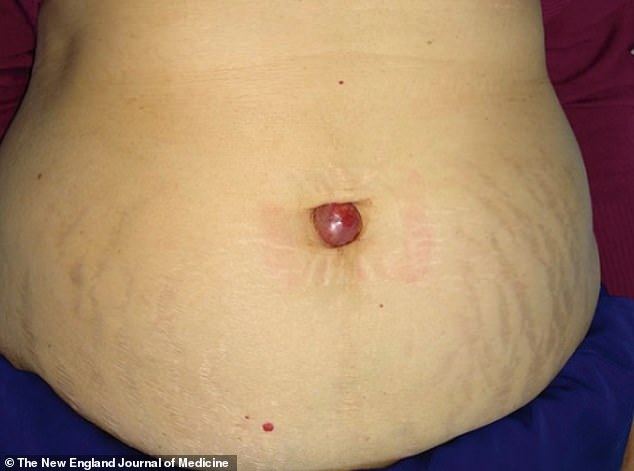 A 73-year-old woman was diagnosed with ovarian cancer after a bizarre red lump grew out of her belly button (pictured). It became larger over four months and started to bleed 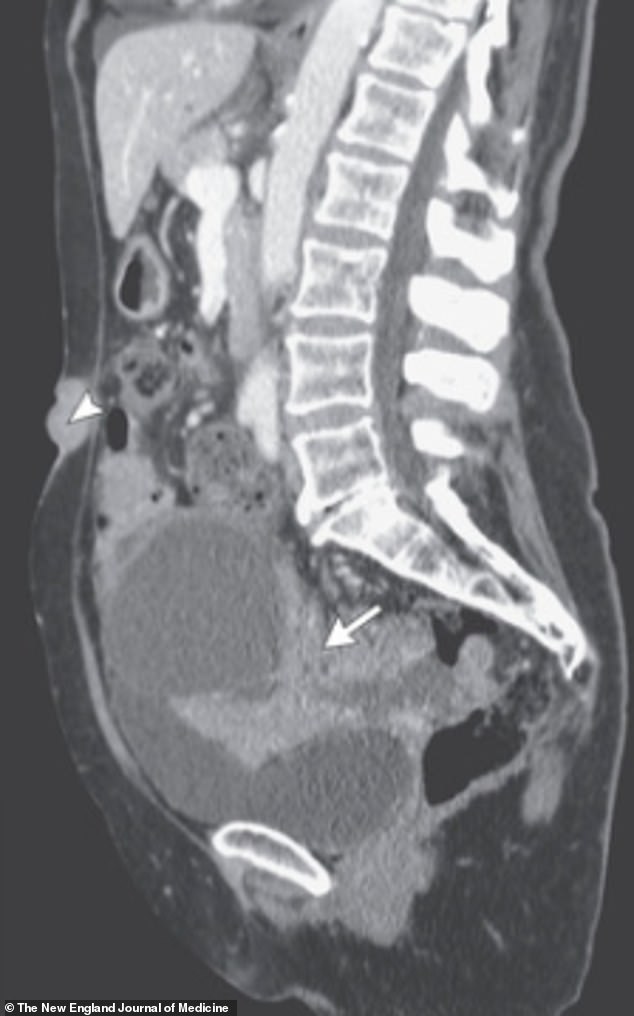 The unnamed patient underwent scans of her abdomen. The top arrow points to the red lump – known as a Sister Mary Joseph’s nodule – in her belly button. The lower arrows shows a 11x11cm tumour – which was 9.5cm deep – in her pelvis. She was later diagnosed with cancer

The woman went to A&E two days after the lump in her belly button started bleeding.

She was treated by Dr Javier Barambio, a general surgery and digestive system physician at the Hospital Universitario Fundacion Jimenez Diaz in Madrid.

Upon examination, the nodule was painful and firm to touch, doctors wrote in a case report in The New England Journal of Medicine.

Scans revealed the pelvic mass – which was 9.5cm deep – as well as fluid in her abdomen and cancerous cells in her peritoneum.

The peritoneum is a thin layer of tissue that lines the inside of the abdomen and its organs, such as the liver.

Biopsies of both the Sister Mary Joseph’s nodule and the pelvic mass confirmed the patient had ovarian cancer.

Dr Barambio told Live Science she is now free of the disease and in good health.

A Sister Mary Joseph’s nodule protrudes from the belly button and can be a sign of severe or metastatic cancer, according to Stanford Medicine.

It is most likely to occur with gastrointestinal – such as bowel or pancreatic – or gynaecological – like ovarian and uterine – forms of the disease.

The nodule’s cause is unclear but is thought to be due to cancerous cells spreading to the belly button either via the peritoneum, lymph system or circulation.

It is also unknown how common the lump is, with it generally being a sign of advanced cancer with a poor prognosis.

The nodule is named after the US nurse Sister Mary Joseph, who first drew attention to it in 1929.

Why ovarian cancer is called a ‘silent killer’

About 80 percent of ovarian cancer cases are diagnosed in the advanced stages of the disease.

At the time of diagnosis, 60 percent of ovarian cancers will have already spread to other parts of the body, bringing the five-year survival rate down to 30 percent from 90 percent in the earliest stage.

It’s diagnosed so late because its location in the pelvis, according to Dr Ronny Drapkin, an associate professor at the University of Pennsylvania, who’s been studying the disease for more than two decades.

‘The pelvis is like a bowl, so a tumor there can grow quite large before it actually becomes noticeable,’ Dr Drapkin told Daily Mail Online.

The first symptoms to arise with ovarian cancer are gastrointestinal because tumors can start to press upward.

When a patient complains of gastrointestinal discomfort, doctors are more likely to focus on diet change and other causes than suggest an ovarian cancer screening.

Dr Drapkin said it’s usually not until after a patient endures persistent gastrointestinal symptoms that they will receive a screening that reveals the cancer.

‘Ovarian cancer is often said to be a silent killer because it doesn’t have early symptoms, when in fact it does have symptoms, they’re just very general and could be caused by other things,’ he said.

‘One of the things I tell women is that nobody knows your body as well as you do. If you feel something isn’t right, something’s probably not right.’