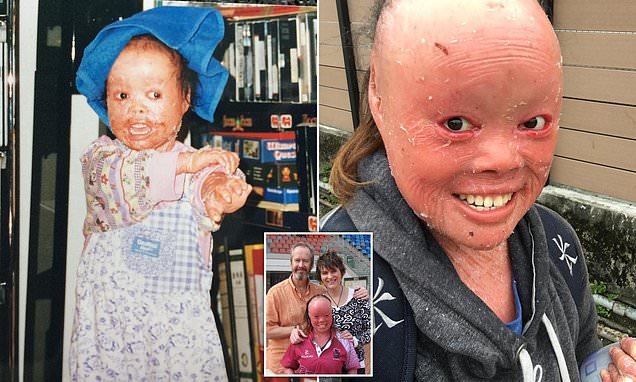 Woman, 26, battling a rare skin condition that causes her body to crack open reveals the agony of the disorder once left her suicidal

A woman has revealed that her rare skin condition which causes her body to crack open once left her suicidal.

Mui Thomas, who resides in Hong Kong, suffers from harlequin ichthyosis, which causes scaly skin that grows at ten times the normal rate.

Growing up, Ms Thomas, whose biological parents abandoned her, experienced bullying and people running away from her in fear.

But her adoptive parents helped her through her darkest times, and now, Ms Thomas is one of the oldest known survivors of the condition at 26.

People with the genetic condition often die as children because they are more vulnerable to infection as their skin cracks. The oldest survivor is 35 years of age. 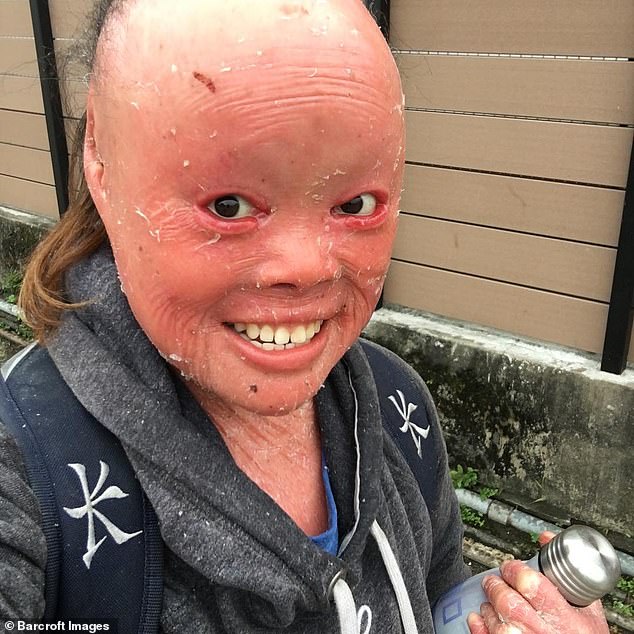 Mui Thomas, who lives  in Hong Kong, suffers from harlequin ichthyosis, which causes scaly skin that grows at ten times the normal rate 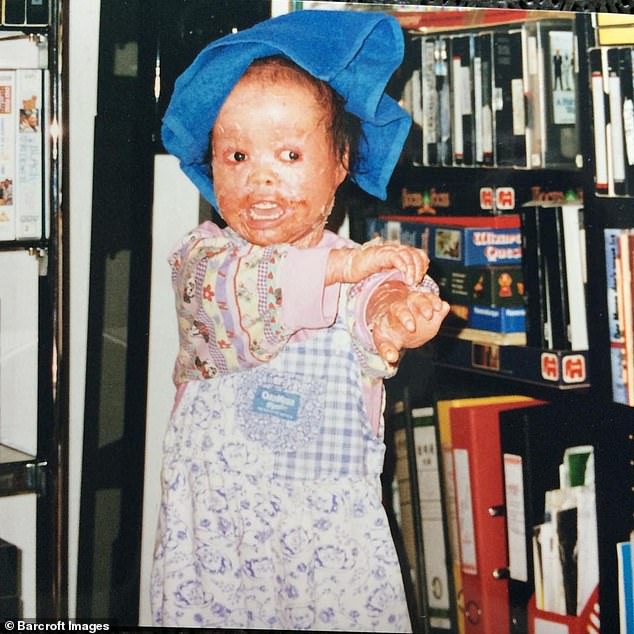 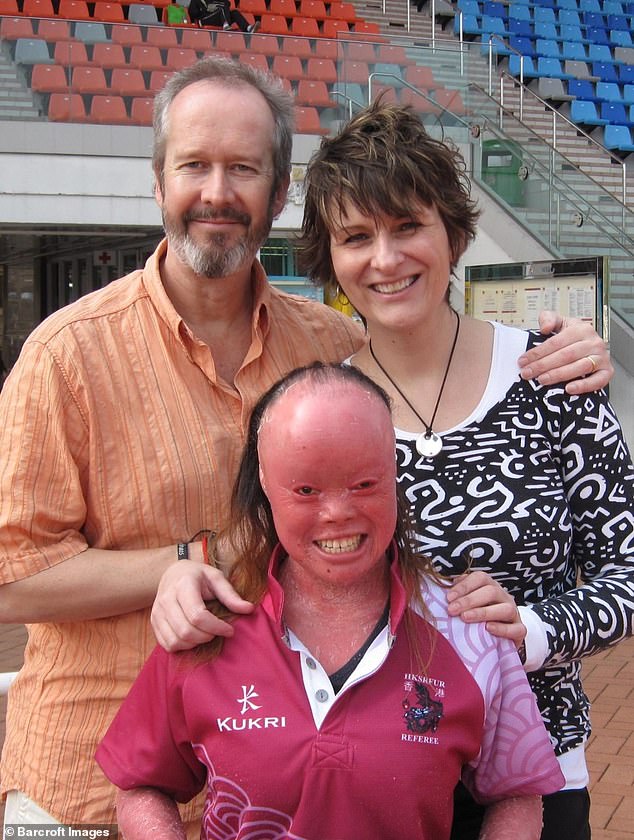 Ms Thomas, who has had harlequin ichthyosis since birth, said: ‘I wrote a suicide note and I gave it to mum.

‘But thank God I am not dead.’

Harlequin ichthyosis is a rare condition, affecting just one in every three million people in Britain – the overall prevalence is unknown.

The skin normally forms a barrier between the body and its surrounding environment, therefore people with harlequin ichthyosis are less protected.

Affected infants are less able to control water loss – and therefore are at a more severe risk of dehydration – regulate their body temperature, and fight infections.

It used to be very rare for a person with the condition to survive past infancy, according to the US National Library of Medicine. However, more are living to adolescence with better treatment. 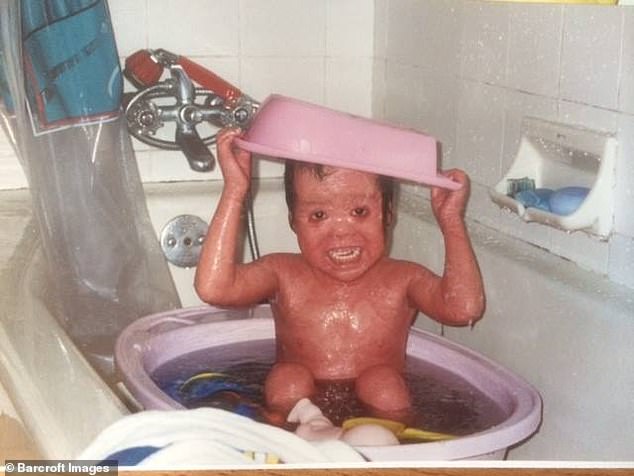 Ms Thomas has had ichthyosis since birth. Pictured as a child in the bath 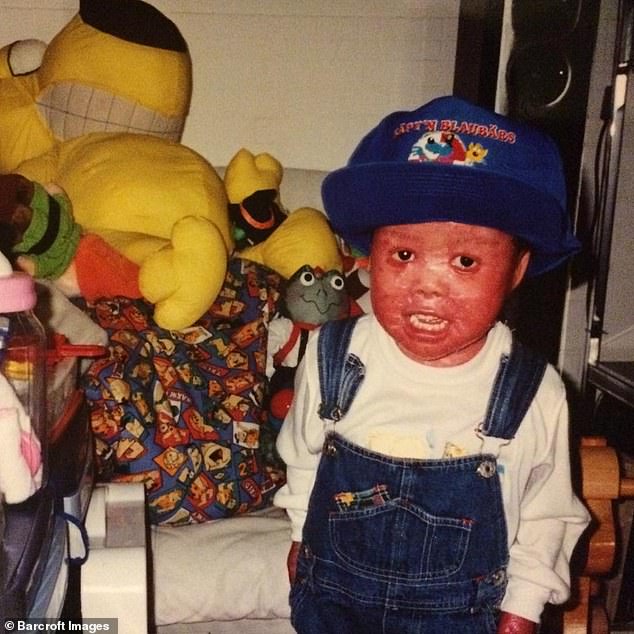 Children with ichthyosis are less able to control water loss – and therefore are at risk of dehydration – regulate their body temperature, and fight infections

Ms Thomas said: ‘If I don’t drink enough I will either get too hot or just dehydrate because my skin would dry out’ 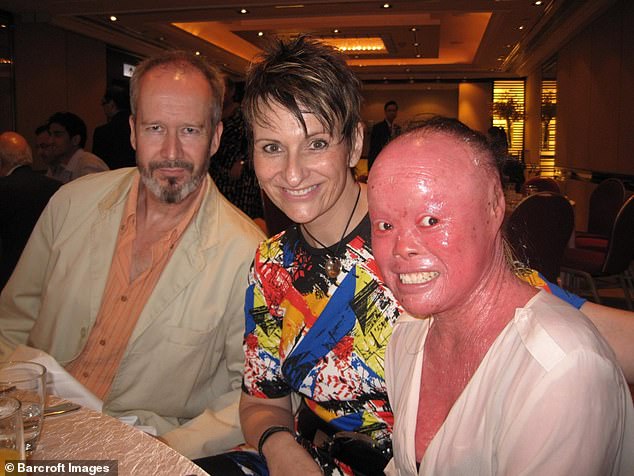 Ms Thomas, pictured with her parents eating out, must take daily two hour baths in an attempt to scrub off layers of dead skin and apply ointment routinely throughout the day

WHAT IS HARLEQUIN ICHTHYOSIS?

Harlequin ichthyosis is a severe genetic disorder that mainly affects the skin.

It is unclear how many people suffer from it.

Babies born with the condition have very hard, thick skin covering most of their bodies.

Restricted movement of the chest can lead to breathing difficulties and respiratory failure.

Most sufferers die from infections within the first few weeks of life.

This is due to the skin normally forming a protective barrier between the body and the outside environment.

Skin abnormalities in Harlequin ichthyosis disrupt this barrier, which also makes it harder for patients to regulate their temperature and control water loss.

There is no cure, however, moisturisers help to keep patients’ skin soft, while antibiotics fight any infections.

Source: US National Library of Medicine

Ms Thomas said: ‘I don’t sweat – my sweat glands are not as much developed as ordinary people.

‘If I don’t drink enough I will either get too hot or just dehydrate because my skin would dry out.’

Ms Thomas’ disorder causes her skin to grow very thick, with deep, painful cracks and causes the skin to grow at ten times the normal rate.

She must take daily two hour baths in an attempt to scrub off layers of dead skin and apply ointment routinely throughout the day.

‘I always carry cream in my bag because it is important for me to remain moisturised,’ Ms Thomas said.

‘Whenever I feel dry I just take the tub out and I will just put some cream on and then I am good to go.’

When Ms Thomas was born she was abandoned by her biological parents and adopted by her now parents Rog and Tina Thomas when she was 18 months old.

Growing up was difficult for Ms Thomas who experienced a lot of discrimination.

She said: ‘I think one of my biggest challenges so far is going out sometimes because people will often stare and point at me and it’s really horrible because I just want to go out and live my life and be normal in the most literal sense, but it doesn’t work when people shout and scream at me so it gets me really down. 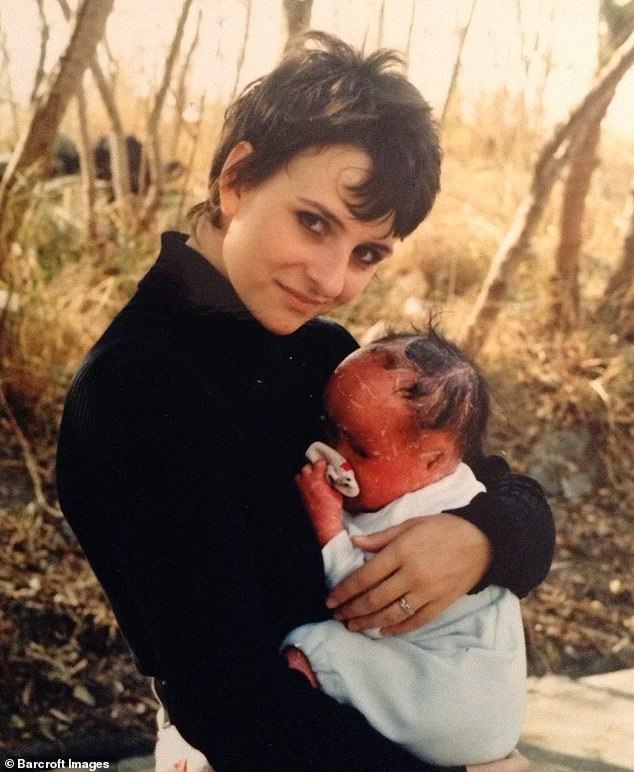 Ms Thomas’ adoptive mother, holding her as a baby, said her daughter’s ‘spirit was completely broken’ after she was cyberbullied as a teenager 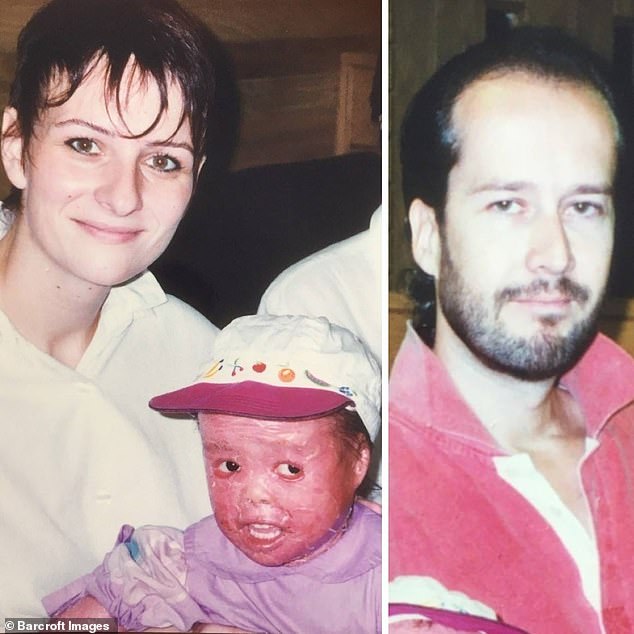 Ms Thomas, pictured as a young child with her adoptive parents, said people have ‘screamed and shouted’ after seeing her, making it hard to live a normal life 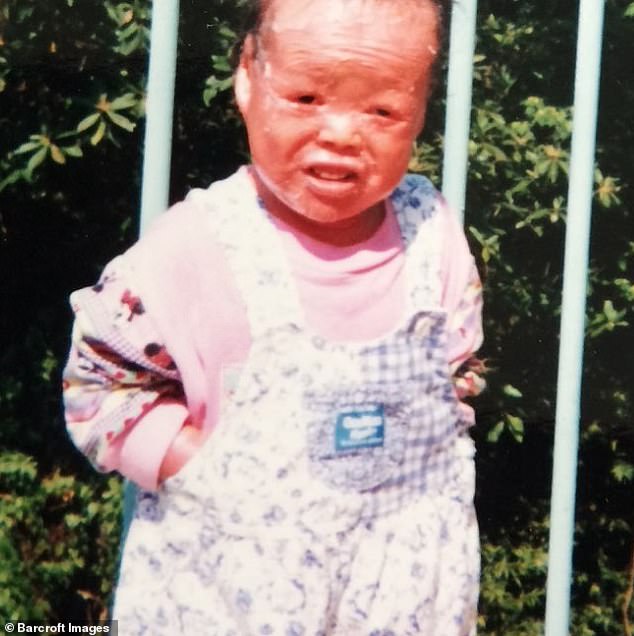 It used to be very rare for a person with harlequin ichthyosis to survive beyond infancy, but treatment has changed this in recent years. Pictured, Ms Thomas as a child 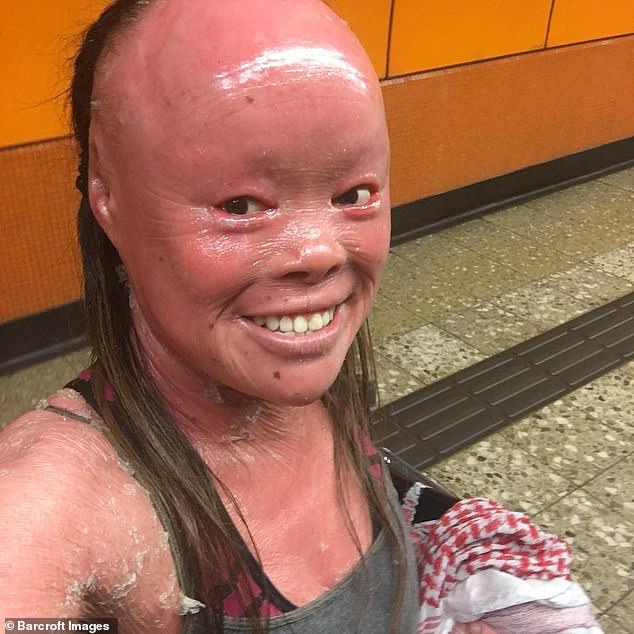 Ms Thomas, who is learning to be a yoga instructor said: ‘I don’t sweat – my sweat glands are not as much developed as ordinary people’

‘There were a couple of times when mothers have covered their kids’ eyes and they just ran away or they walked away or grabbed onto their boyfriends or husbands to run away.’

When she was a teenager, Ms Thomas suffered intense cyberbullying and found herself so down that she had suicidal thoughts.

Her mother, Tina Thomas, said: ‘Her spirit was completely broken and she wanted to give up and it took a long time to build her up that she felt good again to go out there and face people.’

Ms Thomas’ parents helped her through the dark times and together they set up ‘The Girl Behind The Face’ Facebook page in an attempt to help educate people on the disorder. 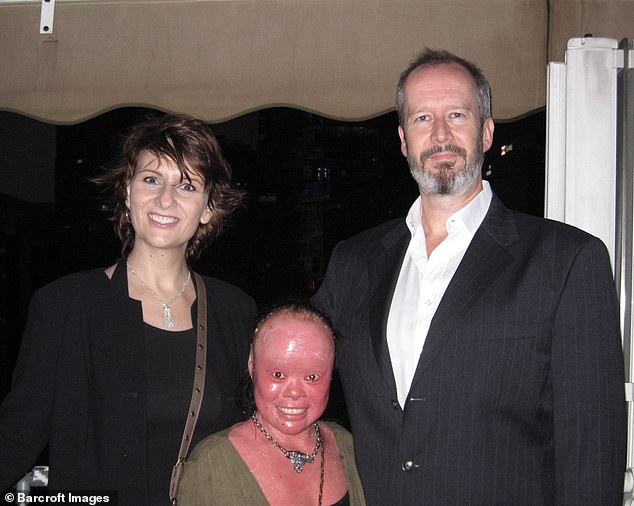 The family, pictured together, have written a book together called ‘The Girl Behind The Face’ to educate people on the condition 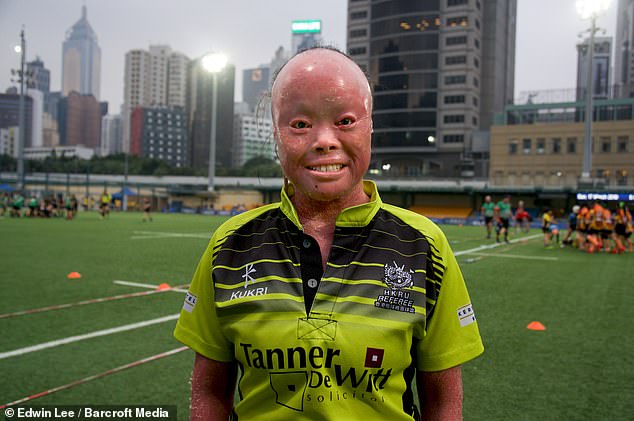 Ms Thomas is a rugby referee in her spare time outside work as a special needs teacher. She tries to live life as normal as possible despite her challenging skin disorder. Pictured, at a match in March 2019

The Thomas family is now planning to publish a book by the same name written by Rog Thomas, Ms Thomas’ father.

He said: ‘The idea of the book is to raise awareness on cyberbullying and discrimination.’

Today Ms Thomas works as a special needs teacher, and in her time off, as a rugby referee and yoga instructor.

She said: ‘I feel like I can empower others to do what they want to do.

‘I think that a lot of people think that having a skin condition like harlequin ichthyosis limits you, but I am here to show others that you can do whatever you want as long as you have the mind for it.’

Despite the hardship that Ms Thomas and her family have endured, she doesn’t let her condition to discourage her.

She said: ‘My hopes for the future is for me to become a stronger person, hopefully to reach a wider audience with what I do, with advocacy and just simply living my daily life.

‘I don’t really look at what happened in the past, the main focus is looking at what’s in front of me.’