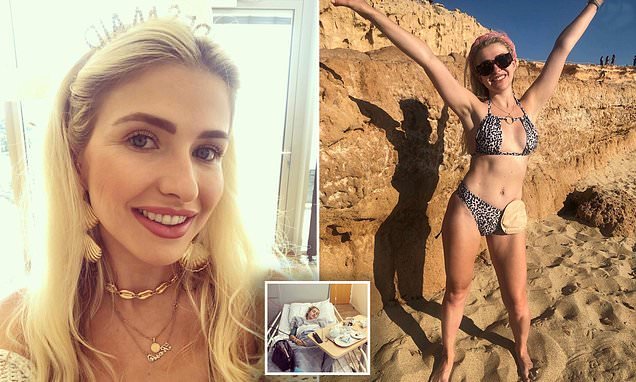 Personal assistant, 28, was diagnosed with Crohn’s disease at just 13 after going to the dentist to complain about her mouth ulcers

A personal assistant has revealed how a trip to see the dentist led to her being diagnosed with Crohn’s disease aged 13.

Rosie Campbell went to the dentist when she developed severe pain in her mouth and around her lips, as well as her ulcers.

The now 28-year-old was referred to an oral specialist, who diagnosed her with the inflammatory bowel disease after performing a biopsy.

Mouth ulcers are a known sign of the condition, which causes inflammation of the digestive system or gut and can be agonising.

Miss Campbell, of Essex, was told she needed a stoma bag, which left the then-teenager terrified no boy would ever want to be with her.

After refusing the pouch for six months, doctors warned Miss Campbell she could die of blood poisoning unless she had the operation.

Miss Campbell eventually had the pouch fitted, however, the ordeal was far from over, with her weight plummeting to just 5st (31.7kg) when she was forced to ‘eat’ through a tube.

However, she did slowly get stronger and is now ‘happier than she has ever been’ with her ‘soulmate’ Reece. 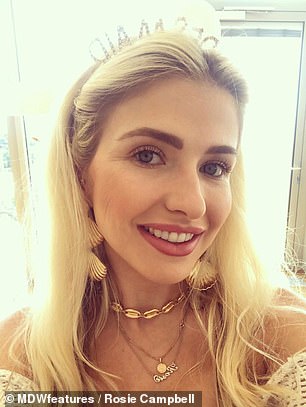 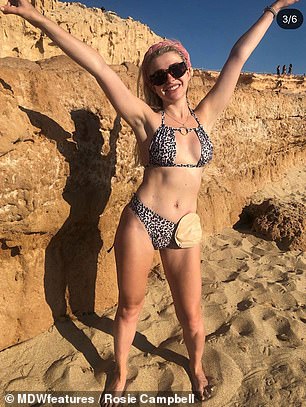 Rosie Campbell (left), now 28, was diagnosed with Crohn’s disease after a routine trip to the dentist at 13. Miss Campbell proudly shows off her stoma bag (seen right) after resisting it for six months because she worried it would put off potential boyfriends 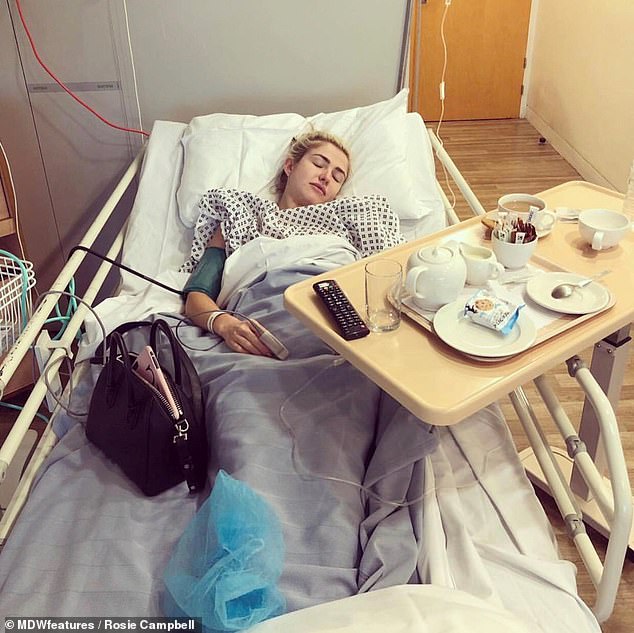 Pictured in hospital during treatment, the ordeal caused Miss Campbell to miss almost a year of school. It also resulted in her weight plummeting from 7st (44.4kg) to just 5st (31.7kg)

Miss Campbell began suffering from mouth pain, as well as abdominal discomfort, in her early teens.

The agony could be so severe she would dread going to the toilet and be up all night crying.

‘I was so scared, no one knew what was wrong with me,’ Miss Campbell said, recalling her ordeal in November 2003.

‘The GP kept sending me away saying nothing was wrong. I was given cold-sore cream and creams for piles. I kept asking myself “why me”.

‘I spent the next year in agony, crying most nights because I was scared to even try to go to the toilet. The pain was like glass cutting me.’

During a routine dental appointment, Miss Campbell was prescribed a week-long course of penicillin to help clear up any infection she may have.

When this failed to help, her dentist referred her to a specialist at Miss Campbell’s local hospital in Epping, where she was finally diagnosed.

‘I didn’t put two and two together, and didn’t think my mouth and bum could be a linked problem,’ she said.

‘At the age of 13 I had no clue what that was and what was about to happen to me.’ 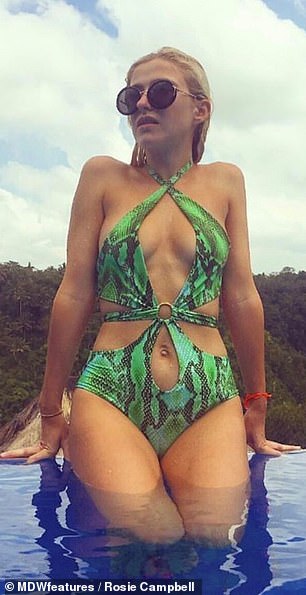 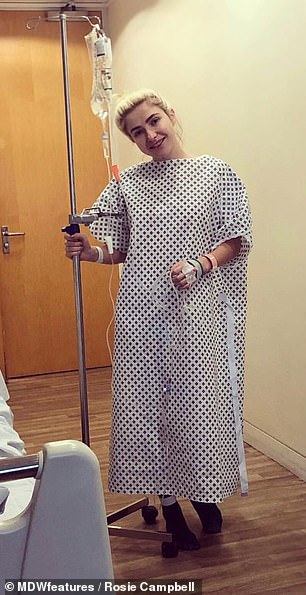 Miss Campbell (pictured left) has ‘found peace and happiness’ as she has grown up. She is pictured right after the surgery to have her stoma fitted in March 2005. Miss Campbell finally agreed to the procedure after doctors warned she would suffer blood poisoning without it 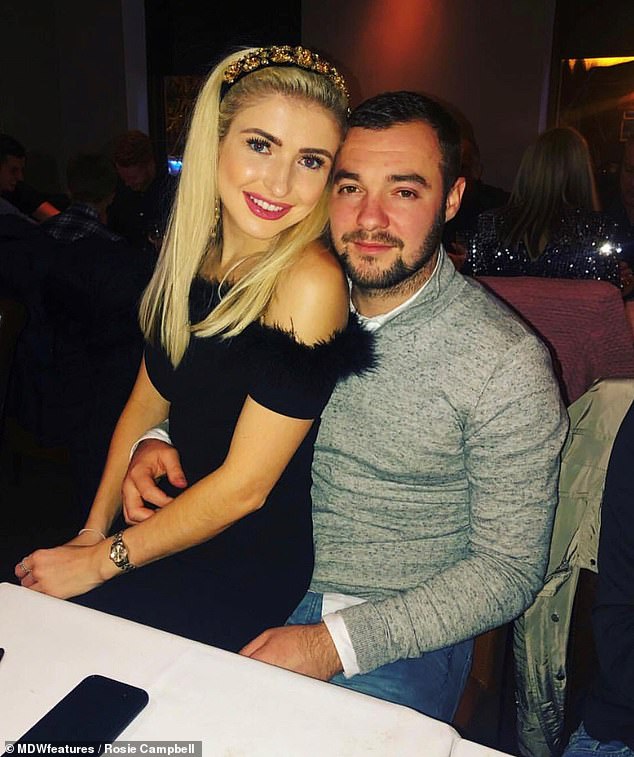 Five months after she was diagnosed, Miss Campbell began taking the drug infliximab every six weeks for several months. Infliximab suppresses a patient’s overactive immune system to help combat inflammation in their bowel.

When this failed to help, doctors warned her only option was a stoma bag.

‘I remember the day I sat in clinic at the Royal London Hospital with my mum and read a poster on the wall, and asked what a stoma was, my mum told me I won’t ever need one of those,’ Miss Campbell said.

‘Little did I know a nightmare was about to happen. I just thought to myself, “who will ever want to be my boyfriend?”.

‘I fought with the doctors for six months before being told if I didn’t have it done, I would end up with septicaemia.’

It was not until she developed heart failure from dangerously low potassium levels in March 2005 that Miss Campbell agreed to have a stoma fitted.

‘My options were to die and not have a bag or have a bag and fight for my life,’ she said.

Potassium helps to maintain the electrical activity of cells, with those in the heart being particularly affected when levels of the mineral fall. 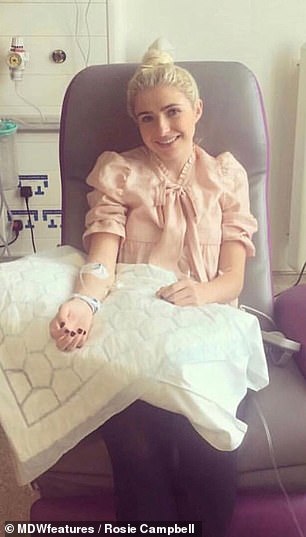 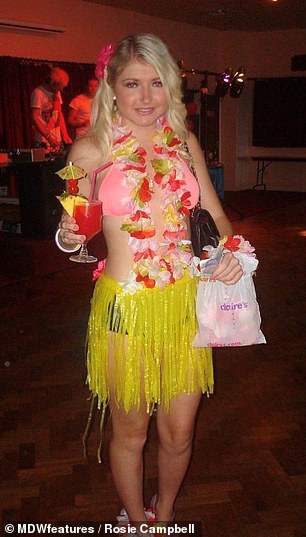 Despite all she has endured, Miss Campbell (pictured right recently) managed to raise a smile in hospital (seen left). She slowly regained her strength and is now a healthier 8st (50.8kg) 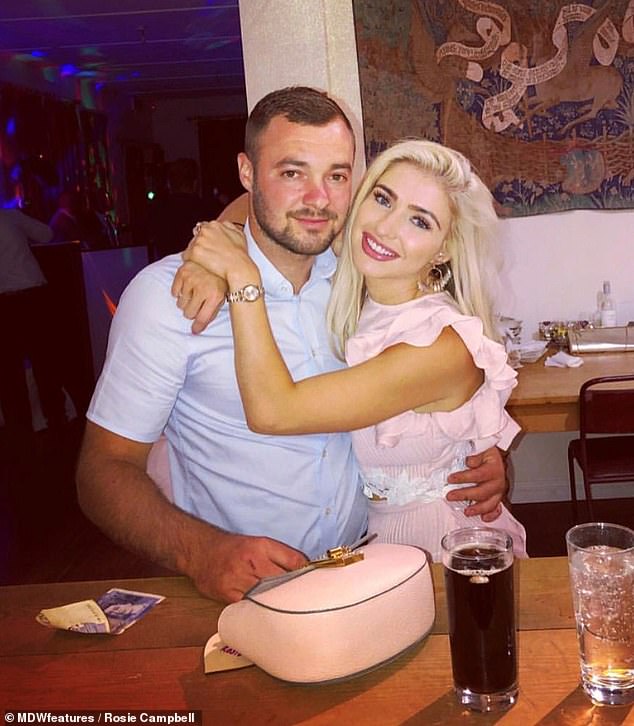 WHAT IS INFLAMMATORY BOWEL DISEASE?

Inflammatory bowel disease (IBD) is a medical term that describes a group of conditions in which the intestines become inflamed (red and swollen).

Ulcerative colitis affects the large intestine (colon) whereas Crohn’s disease can occur in any part of the intestines.

People of any age can get IBD, but it’s usually diagnosed between the ages of 15 and 40.

The conditions are chronic and cannot be cured so treatment usually relies on medication and lifestyle changes to manage the symptoms, but may include surgery.

Miss Campbell’s treatment resulted in her missing almost a year of school. It also caused her weight to plummet from 7st (44.4kg) to just 5st (31.7kg).

‘Six weeks after my operation I was back in hospital, five stone, losing all of my hair and feeling very unwell,’ she said.

The then-teenager was forced to ‘eat’ via a feeding tube that went through her nose due to her being too weak to chew and swallow.

With doctors being desperate for her to gain weight, Miss Campbell spent weeks on a liquid diet of 3,000 calories a day.

Overtime, Miss Campbell recovered and gained weight, which helped to boost her self esteem.

‘As I’ve gotten older, I’ve found peace and am happier to accept I have [my stoma] for life,’ she said.

‘I’m happy in a relationship now and the happiest I’ve ever been.

‘I finally met my soulmate. I spent years worrying about meeting new people, not being able to have casual flings because of the bag, but people are more understanding than you think.’

Miss Campbell is speaking out to encourage others with Crohn’s to stay positive.

‘Don’t waste time like me, if your told you need a stoma do it,’ she said. ‘Keep on fighting. Everyone is facing some kind of battle whether it’s physical or mental.

‘Make the most out of what hand your dealt and live your best life. Together we can break the stigma and show what self-love and self-care is.’ 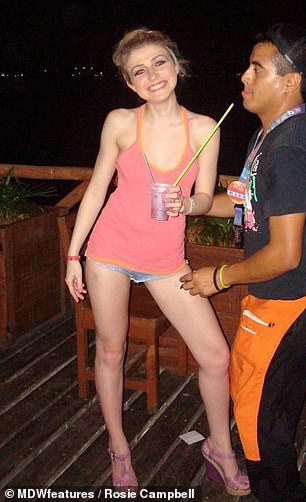 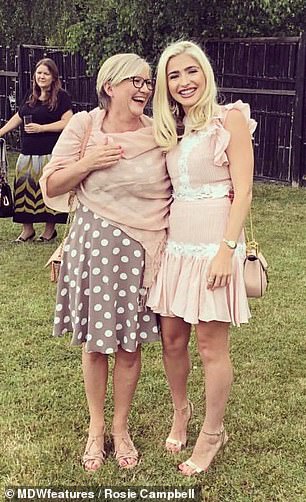 Miss Campbell is pictured left around the time doctors were trying to persuade her to have a stoma bag fitted. Her mother (pictured together right) reassured her she would ‘never need’ a pouch. It was not until she developed heart failure that she agreed to the procedure 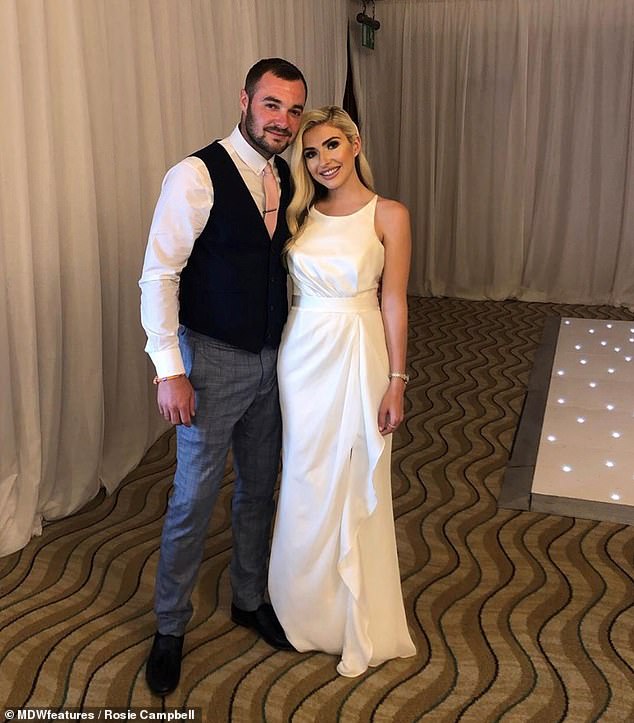 Pictured with Reece, Miss Campbell claims people are ‘more understanding than you think’