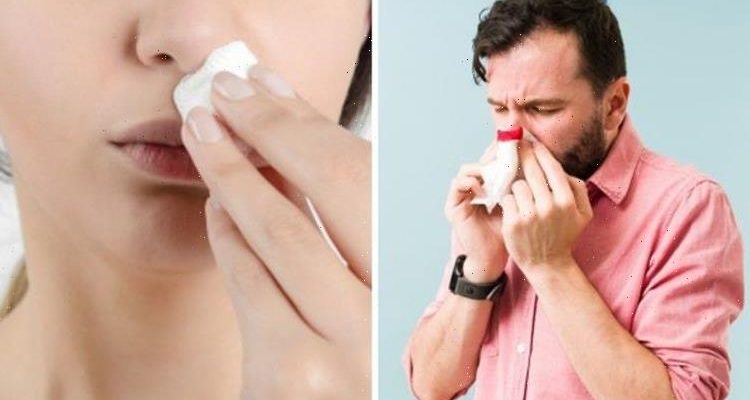 Allergies, infections, a change in hormones, spicy foods and medication are some of the many reasons you might be blowing your nose often. The idea behind blowing your nose is to expel mucus or anything that does not belong in your nostrils, but you don’t normally expect to see blood in the tissue when you’re done. What does blood mean when blowing your nose? Express.co.uk reveals the possible answer, according to WebMD and Net Doctor.

Your body makes about one to one and a half litres of mucus every single day.

The lining of your mouth, nose, sinus, throat, lungs and gastrointestinal tract all produce mucus to prevent the tissue from drying out.

Mucus in the mouth and nose is also great at trapping harmful bacteria before it enters the body and makes you sick, and the antibodies in the mucus can kill these nasties too.

While you don’t necessarily want to look at your mucus, paying attention to the colour and amount of mucus coming out of your nose can explain a lot about your health.

You probably don’t notice your mucus until it changes in thickness when you have a cold, allergy or something irritating in your throat or nose and your body makes you want to cough or sneeze it up.

But what does it mean when your mucus changes colour and has blood in it?

Most of the time, seeing blood in your tissue after blowing your nose is not a big deal.

According to the experts at WebMD, if your mucus contains tinges of reddish or brownish blood, it’s probably nothing to worry about.

So if you have blood in your tissue, it’s probably because your nose is “dried out or irritated from too much rubbing, blowing or picking”.

A small amount of blood in your mucus isn’t anything to worry about, but if you’re seeing lots of blood, call your doctor.

If your nose is ALWAYS a bit stuffy in the morning, you might have allergic or vasomotor rhinitis.

Net Doctor explains: “This is a fancy way of saying that the lining of your nose gets congested, sometimes because of an allergic reaction.

“The swollen and inflamed nasal lining is more likely to bleed when you blow your nose, but the bleeding does not usually amount to much, just a few spots.”

If this has been going on for more than a couple of months, it probably isn’t hay fever and is more likely to be something in your bedroom such as specific pillows or duvet that you are allergic to.

The Net Doctor advice reads: “ It might be worth considering these things and try a change if there is a possibility they might be the culprits.”

You may also have an infection in your lower nostrils that is causing you to bleed when you blow your nose.

Net Doctor explains: “Sometimes people with this sort of problem also notice crusting in the inside of their nose.

“This may mean a slight infection in the lower nostrils, and there is a little knot of blood vessels there called ‘Little’s area’.

“If these blood vessels get inflamed, they can also bleed when you blow your nose.

“The bleeding is often repeated and troublesome and the area can be cauterised to stop the problem.

“Should the bleeding persist and get worse, then it would be best to go and mention it to your GP.”