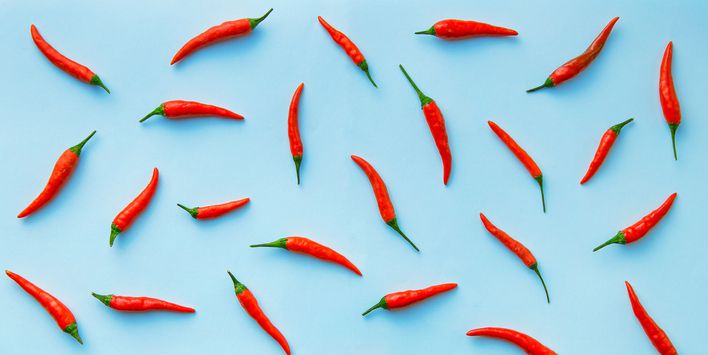 When it comes to healthy eating, spicy food gets some pretty mixed reviews. On one hand, there’s talk that it speeds up your metabolism. On the other, it might cause acid reflux. So…what gives?

Well, the whole “spicy food causes acid reflux” thing isn’t totally accurate. “Most people who have reflux or gastro issues don’t eat spicy food because they worry it might make them feel worse,” says Bonnie Taub-Dix, RD, creator of BetterThanDieting.com and Read It Before You Eat It . But while it may seem counterintuitive, “eating spicy food can actually decrease acid production.”

Still, if you’ve been avoiding spicy food, Taub-Dix doesn’t recommend having a crazy-hot meal right away. Start slow! “Ditch the salt and add blends of different spices and seasonings [to your meals],” she says. That extra spice adds delicious flavor to an array of veggies and proteins—making them even more enticing to eat.

The main health issue? Spicy foods are notoriously high in salt, says Taub-Dix, which can have negative effects on heart health. When you buy spicy foods or products at the store, check the label’s ingredient order. Ideally, you want the spice itself, like jalapeño, habanero, or chili powder at the very top—with salt low on the list, or not at all.

Okay…but why bother going through all this trouble? Is spicy food actually healthy? As it turns out, spicy food packs some 🔥🔥🔥benefits.

1. It boosts your metabolism.

“I wouldn’t rely on it as a weight loss method, though” she says. If you’re eating something not so healthy, adding hot sauce on top doesn’t cancel it out.

Not a fan of mouth-burning spice? The compound is also found in milder spices like turmeric and cumin, she says.

Ever get a hankering for sweets even though you’re not remotely hungry? Taub-Dix says spicy food works similar to toothpaste: You rarely want to go to town on sweets once your mouth is all minty fresh.

“After having the hot and spicy taste in your mouth, you usually don’t want cookies afterward,” she says. “I’ve had patients say that when they have chili sauce or jalapeño, they’re satisfied because it feels like they’ve hit the spot.”

Inflammation is behind a host of serious illnesses, and Taub-Dix says capsaicin has powerful anti-inflammatory properties. “We know reducing inflammation has a positive effect on fighting heart issues and cancer,” she says.

4. It could boost your immune system.

While eating fistfuls of hot Cheetos won’t ward off the common cold, the idea is that spices contain antioxidant and antimicrobial properties that protect against bacteria in the body, according to Taub-Dix. Hot lemon water with a dash of cayenne à la the Beyoncé cleanse might not be the worst thing in the world at the onset of sniffles.

5. It may…spice up your libido.

Not feeling it tonight? Have a hot date with some hot wings. According to Taub-Dix, consuming spicy foods increases testosterone, the hormone tied to libido.

If you’re looking for a partner who can keep up, one study from the journal Physiology and Behavior found that those who gravitate towards spicy foods have higher levels of testosterone to begin with.

6. It can help you stay regular.

So, it’s not exactly the spicy foods themselves that’ll make you go, but all the chugging you’ll do to offset the burning pain, according to Taub-Dix. “It triggers you to drink more water, which helps with constipation,” she says.

7. It may reduce symptoms of depression.

Taub-Dix says spicy foods can release the neurotransmitter serotonin in the brain, which helps boost mood and alleviate depression. Keep in mind, though, that mental health issues can be debilitating if left untreated. So seek professional help if you think you might have a problem, and don’t rely on spicy foods as a cure-all.