Infection with the severe acute respiratory syndrome coronavirus 2 (SARS-CoV-2) leads to the constellation of signs and symptoms called coronavirus disease 2019 (COVID-19). While primarily a respiratory illness, there are distinctive alterations in the type and number of blood cells in COVID-19. A new study by a team of researchers in Germany describes the nature of these changes. The team has released their findings on the bioRxiv* preprint server.

In severe and critical COVID-19, the systemic damage is caused by uncontrolled inflammation. The involvement of activated immune cells such as the T lymphocytes, monocytes and their phagocytic counterparts, the macrophages, is key to this hyperinflammation. Coagulation abnormalities and thrombotic phenomena are also characteristically seen during this condition, causing the blockage of blood vessels at various sites. 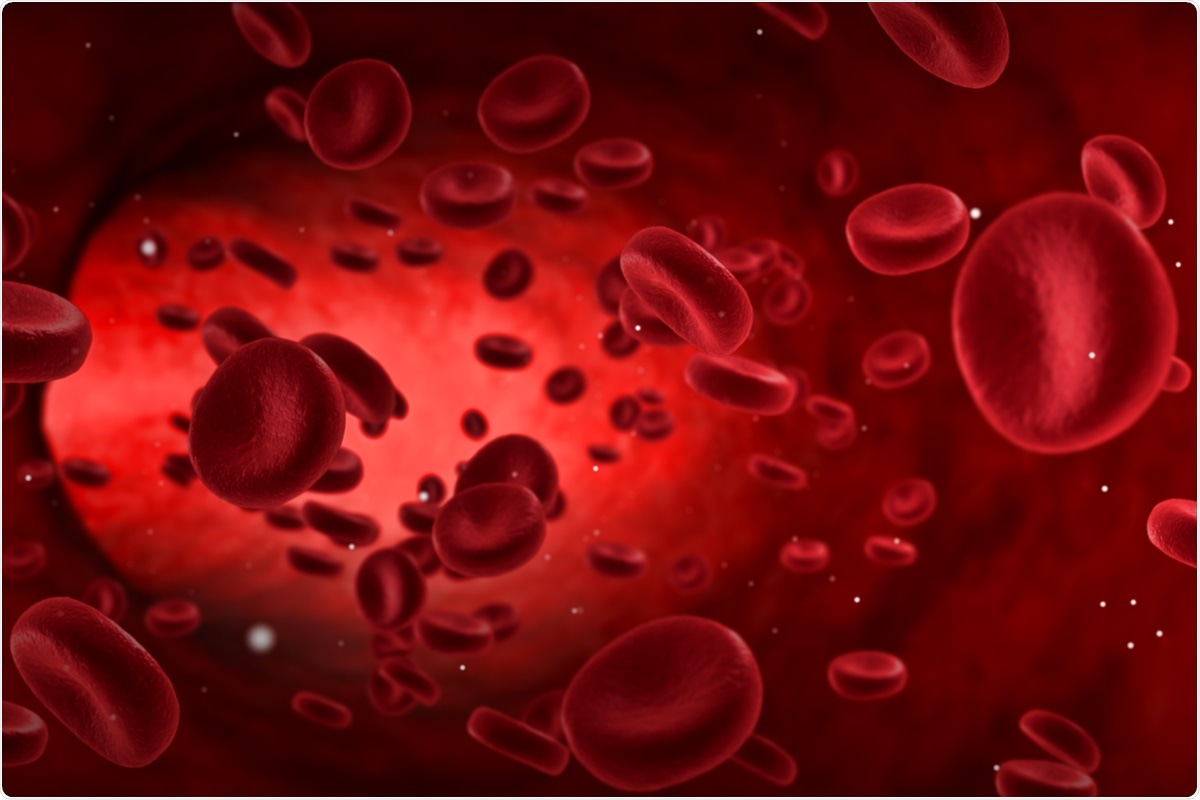 Blood cells show biochemical, mechanical and morphological changes in response to the stimulus they experience during a bout of infectious disease. In fact, earlier studies have shown that mechanical changes in blood cells can be used as a disease marker, and this may contribute to the occlusion of multiple blood cells in such conditions.

The current study set out to explore such changes, using real-time deformability cytometry (RT-DC). This is a high-throughput technology that is used to mechanically examine up to 1,000 cells per second, on the basis of label-free imaging. This has been in previous studies to describe the profiles of blood cells in a variety of conditions, including spherocytosis, malaria, acute lymphoid leukemia, and acute myeloid leukemia.

The study shows changes in the physical phenotype of both red and white cells. It interrogated over 4×106 blood cells from 55 blood samples. Of these, 17 and 14 were current and recovered COVID-19 patients, and 24 were volunteers free of obvious infectious or inflammatory disease.

The white cell counts were found to be elevated in severe COVID-19, especially neutrophilia and lymphopenia. The median neutrophil to lymphocyte ratio (NLR) went up from ~1 to over 3.6, and in several patients, the lymphocytes were outnumbered by neutrophils eight to one. The NLR has been shown to reflect the odds of dying from COVID-19.

Some samples showed an increase in monocytes, but overall, the ratio of monocytes to total white cells lay in the normal range, at 2-8%. In some patients, it went above 10%. Eosinophils largely remained normal.

The researchers found that red cells became smaller and somewhat less deformable when median values are used. However, individual patients showed extreme changes in deformability during the disease phase, that were not seen in the healthy and recovered stages. Low deformability below 0.28 was seen in a third of cells from hospitalized patients, which is double that seen in recovered patients, and more than three-fold the number seen in healthy donors.

Differences persisted between the healthy and recovered cohort as well, indicating the long-term nature of these changes. Cell sizes also showed a broader distribution.

The reason for such changes may be due to the structural and functional alterations in red cells seen with COVID-19, as reflected in the permanent damage caused by the infection to the proteins of the red cells. This is due to oxidative stress, with membrane properties being severely affected, resulting in impairment of the oxygen transport function of the red cells.

It is important to realize that the average lifespan of a red cells is four months, which indicates that these damaged cells continue to circulate as such, being incapable of synthesizing new proteins to repair or replace the damaged ones. This could be part of the pathogenesis of this condition.

The loss of deformability renders the red cells more liable to removal by the spleen, but could also induce hypoxic damage by reducing the microcirculation. The cells with only minor changes in deformable characteristics may escape splenic sequestration, however, and continue to circulate until their lifespan is over. This may be one source of ‘long-haul’ symptoms and signs in COVID-19.

The study also showed that while lymphocyte size remained standard, they became more deformable in hospitalized patients, but not significantly so in recovered patients, relative to controls. Young’s modulus, an established measure of stiffness, was found to be reduced from a median of 1.15 kPa to 1.03 kPa in the former group.

Monocytes take part in the inflammatory response directly, but also differentiate into macrophages or dendritic cells to recruit other immune cells and target other signaling pathways. In COVID-19, monocyte size went up in hospitalized patients compared to the other groups by a median of 9.5% when the cross-sectional area is considered. The distribution width also went up due to the appearance of some very large cells.

Cell volumes also went up from a median of 303 μm3 for healthy controls, and 305 ± 19.4 μm3 for recovered patients, to 354 μm3 in hospitalized patients, with some very and perhaps highly phagocytic cells. This supports earlier findings. The monocyte stiffness remained unchanged, however. 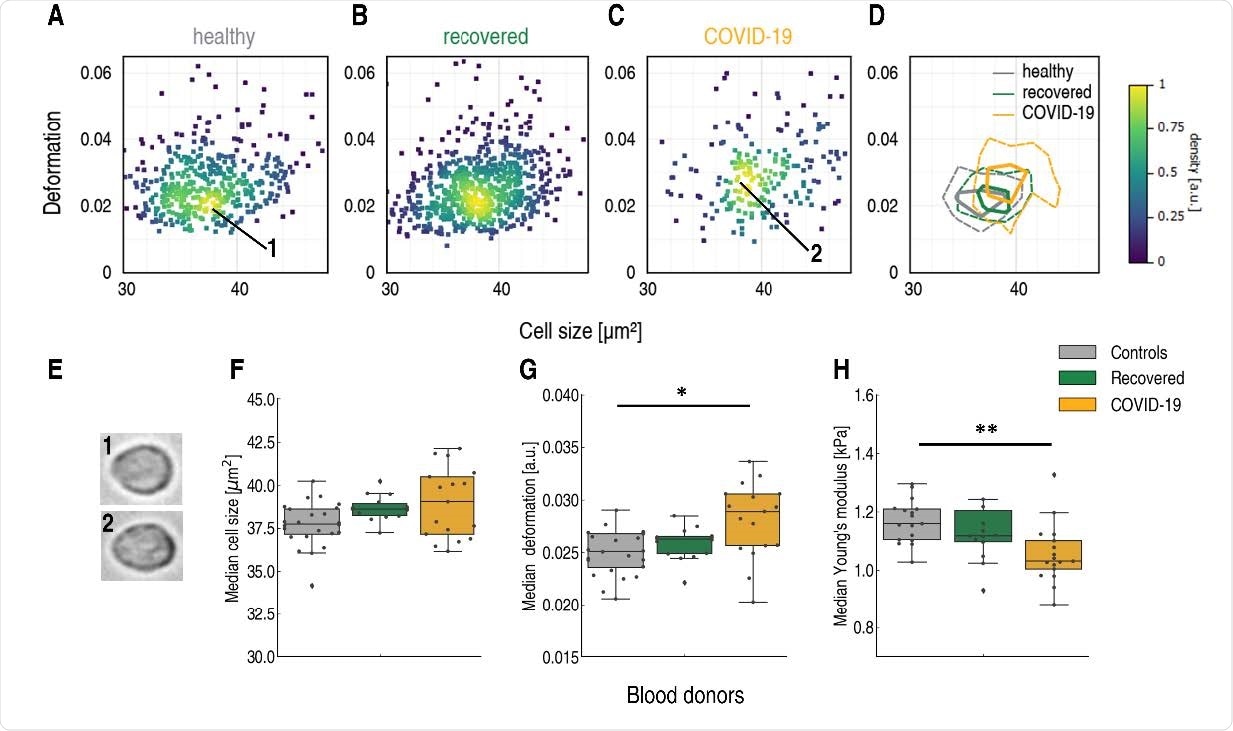 Neutrophils in COVID-19 became larger and more voluminous in hospitalized patients. They also became more diverse, with some very large cells being observed. The deformation also went up, in tandem with their size, as has been shown to be characteristic of activated neutrophils. Thus, this rapid, purely mechanical method of neutrophil assessment could be used to assay neutrophil activation.

There was a small decrease in the median Young’s modulus during COVID-19, which persisted into the recovery period, along with changes in neutrophil size and volume. This also confirms earlier reports of higher neutrophil counts in recovered patients, indicating the durable mark of COVID-19 on the immune system.

With three patients, RT-DC was carried out before they contracted SARS-CoV-2 infection. This rare opportunity to follow up after they became ill with COVID-19 showed that the above findings were valid reflections of the phenotypic and mechanical changes that occurred in red cells.

The findings show, for the first time, a marked reduction in lymphocyte stiffness, with larger monocyte and neutrophil sizes. Neutrophils also became more deformable and were in an activated state, while red cells became smaller and less deformable.

The mechanical changes may be due to cytokine-induced alterations of the cytoskeleton of blood cells, as a cytokine storm is known to occur in most hospitalized COVID-19 patients. The changes in white cells could explain the occurrence of microvascular thromboses and pulmonary embolism

Even months after hospital discharge, some of these markers remained altered relative to findings in the control group, indicating the prolonged effects of COVID-19 on the cardiovascular system. Since neutrophils survive for only a day, on average, the persistence of such changes may indicate permanently altered immunological pathways, or even long-term effects of direct viral infection of the bone marrow stem cells.

The findings point to the value of this inexpensive method in monitoring the clinical course of COVID-19, and especially the immune response.

A large number of RT-DC datasets must be acquired to identify certain profiles as being characteristic of specific conditions. Future studies focused on this aspect of infection in a larger sample could help produce better diagnostic methods for such conditions, especially when molecular diagnosis is not yet possible, as in the early phase of the current pandemic.