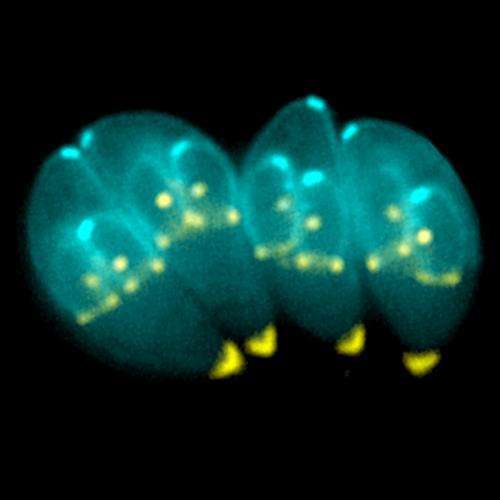 The parasite Toxoplasma gondii infects up to one-third of the human population, experts say. Sometimes transmitted to humans from infected cat feces or litter, the protozoan can cause severe and even deadly illnesses in immunocompromised people and fetuses. Now, researchers reporting in ACS Infectious Diseases have discovered that common herbicides and some of their derivatives can kill the parasite when it infects human cells in a petri dish, without harming the cells themselves.

T. gondii infection usually occurs from eating undercooked contaminated meat, exposure to infected cat feces or mother-to-child transmission during pregnancy. The parasite causes mild or no symptoms in most people, but it can cause severe illnesses in immunocompromised people and birth defects in the fetuses of pregnant women. Current therapies have limitations, such as strong side effects and an inability to cross the placenta to treat the fetus. They also don’t work well for chronic infections. Recently, scientists discovered that T. gondii expresses an enzyme (protoporphyrinogen oxidase, or PPO) that more closely resembles the plant version of the enzyme than the mammalian one. Plant PPO, which helps make an essential compound called heme, is the target of some common herbicides, including oxadiazon. Kerrick Rees, Zhicheng Dou and Daniel Whitehead wondered if these herbicides or their derivatives could kill not only weeds, but also T. gondii—without harming human cells.