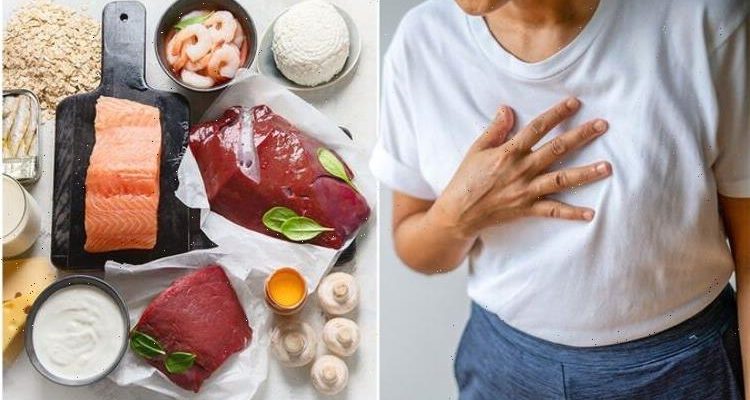 If an individual becomes deficient in B12, this can be due to a number of reasons.

The most common reason for B12 deficiency in the UK is pernicious anaemia, a condition where the immune system attacks cells in the stomach.

Although the cause of pernicious anaemia is not yet known, it can still be treated through injections of vitamin B.

These injections will be organised by a GP.

With regard to diet, foods such as meat, dairy, and fish are the best sources.

Those on a vegan diet, suggests the NHS, should take B12 supplements or consume fortified foods containing B12.

Just like other deficiencies such as vitamin D, vitamin B12 deficiency has a number of symptoms.

These include symptoms that affect the chest such as heart palpitations.

Other signs of a B12 deficiency can include fatigue, lethargy, breathlessness, feeling faint, headaches, pale skin, tinnitus, loss of appetite, and weight loss.

It is recommended that an individual should see a GP if they are experiencing any of the symptoms of a vitamin B12 deficiency.

Furthermore, it is important to be seen as soon as possible otherwise a vitamin B12 deficiency can cause permanent damage.

Meanwhile, in another area of cardiovascular concern, campaigners are calling for more to be done about the UK’s lung health.

Overall, the UK has one of the highest death rates from lung conditions in Western Europe.

According to analysis from the charity Asthma and Lung UK, more than 100,000 people in the UK die from lung related conditions every year.

The charity said more needed to be done to tackle the issue.

Sarah Woolnough, their chief executive said: “The state of lung health in the UK is shameful, with more than 100,000 people dying every year from lung conditions…and air pollution causing people to develop lung conditions or making existing ones worse.”

Woolnough described the state of lung health as a “national scandal”.

It is hoped that the charity’s data will shine a light on an issue that, despite COVID-19’s affect on the respiratory system, has not created wider debate on lung health.

For more information on the symptoms of lung conditions contact the NHS or consult with your GP.