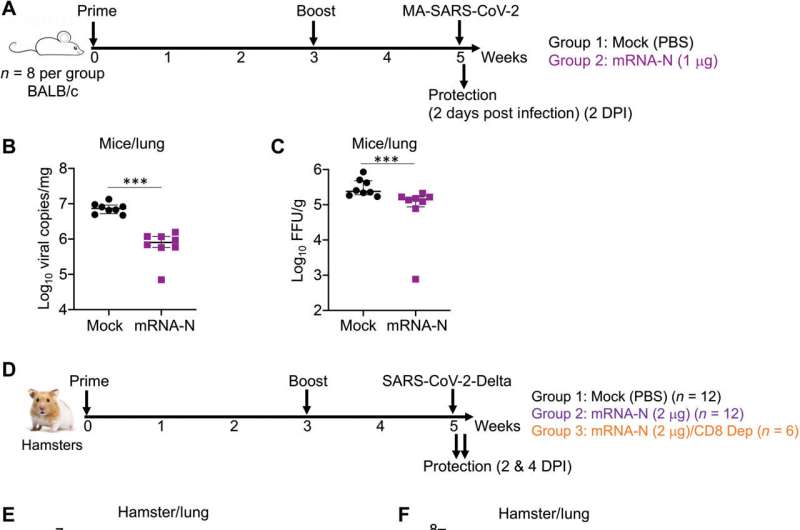 A large team of researchers at the University of Texas Medical Branch, working with two colleagues from the University of Pennsylvania Perelman School of Medicine and two with the Mayo Clinic, has developed a vaccine for COVID-19 that targets both the spike and nucleocapsid proteins in the SARS-CoV-2 virus. In their paper published in the journal Science Translational Medicine, the group explains their approach to developing the new vaccine and describes how well it worked in test mice and hamsters.

As the pandemic has worn on, medical scientists have come to learn a lot about the virus behind COVID-19 infections. To that end, they have developed vaccines that target spike proteins on the virus that play a major role in allowing entry to host cells. Unfortunately, such spike proteins are easily changed by the virus, which results in the development of variants and the need for updated vaccines. In this new effort, the researchers focused on another protein in the virus, one that is less adaptable.

Just as the spike protein in the virus has been shortened to “S,” the protein drawing the focus of the researchers on this new effort is shortened to “N”—for nucleocapsid protein. It is located in the core of the virus and helps it to replicate. Due to its function and location, it is much less likely to change, which means variants with different N proteins are not likely to develop very quickly.

The researchers created an mRNA-type vaccine that targets the N protein and tried it out on test mice. They found, as expected, that it did not do much to prevent new infections. But it did incite a strong T-cell response, which is good, because such cells help to clear the virus from the body.