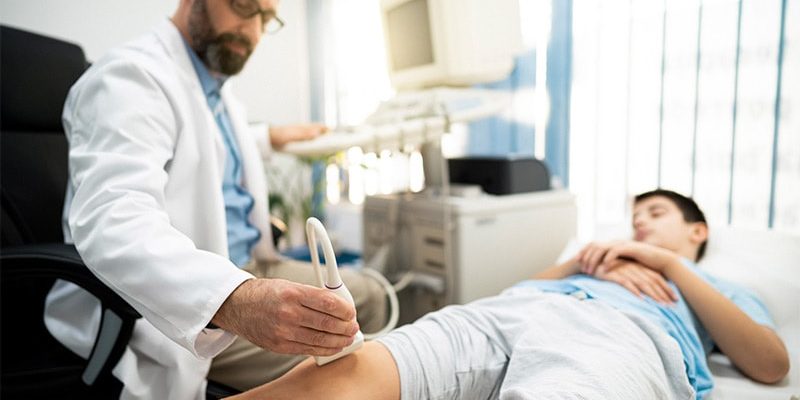 Adding ultrasound (US) to the clinical exam helps predict the likelihood of future gout flares, results of a prospective, observational study conducted in Italy suggest.

“We demonstrated that US findings provided an additional value over clinical data in estimating the risk of flares. Moreover, we reported an association between US findings at a joint and the occurrence of gout flares at the same joint,” they add.

Predicting risk of flares and reducing their occurrence are two main challenges in managing gout, the authors write. US can be used to scan multiple joints and is widely used in Europe as a low-cost, radiation-free imaging tool that’s easily integrated into clinical practice.

To investigate whether US can predict gout flares, the researchers enrolled 81 consecutive adult patients with gout in the study between April 2019 and March 2021 at one academic rheumatology treatment site in Italy and followed them for 12 months. The authors compared cases (who developed at least one flare within 12 months of the baseline visit) with controls (who self-reported no gout flares over that period).

­Patients diagnosed with other inflamm­­­­atory arthritis and those with coexisting calcium pyrophosphate deposition disease were excluded from the study.

The 71 participants who completed the study were, on average, in their early 60s, and in both groups, all but one were male. At the baseline visit, all had been on stable urate-lowering therapy for at least 6 months and had not had any gout flares in 4 weeks. The mean gout duration was 7 years in the case group and 8 years in controls.

At baseline, all participants underwent physical examination and US of elbows, wrists, second metacarpophalangeal joints, knees, ankles, and first metatarsophalangeal joints by a member of the research team who was blinded to the clinical and laboratory data.

Clinical assessments were scheduled at baseline and at 6-month intervals, and all participants were evaluated by a second researcher who was blinded to US findings.

During follow-up visits, participants were asked to report any gout flare, considered to meet at least three of these four criteria: patient-defined flare, pain at rest score higher than 3 on a 0-10 scale, at least one swollen joint, and at least one warm joint. Patients not reaching their target serum urate goal received escalated urate-lowering therapy dosage and anti-inflammatory prophylaxis.

The US indicators of MSU deposits — aggregates, double contour sign, and tophi — were recorded as present or absent. The power Doppler signal was scored from 0 through 4, and summated scores for each US finding were calculated.

Over 12 months, the researchers found:

Gout remains the most common cause of inflammatory arthritis and a significant reason for hospital visits, noted Narender Annapureddy, MD, associate professor of medicine at Vanderbilt University Medical Center in Nashville, Tennessee.

“The study adds to the growing utility of musculoskeletal ultrasound in rheumatology practices to treat various diseases,” he said. “Data that could provide risk prediction for gout flares would be associated with significant benefits in terms of reducing ER visits, hospital admission, and lost work productivity.”

One study limitation, Annapureddy mentioned, was the single experienced US reader, “which may limit generalizability of results at this time, at least in the United States.”

Yeohan Song, MD, an instructor at The Ohio State University Wexner Medical Center in Columbus, integrates US into his practice.

“In gout management, musculoskeletal ultrasound is a useful adjunct to the clinical exam and laboratory markers, particularly [in patients with] with recurrent flares despite guideline-directed target serum urate levels,” he said.

“That would not be practical in the United States due to time constraints in most rheumatology clinics,” she said.

“The authors report that a ‘reduced scanning protocol’ of the bilateral knees, ankles, and first metatarsophalangeal joints demonstrated similar predictive ability as the full protocol,” she added, “although scanning six joints still might not be feasible during a typical return patient clinic visit in the United States.”

“A baseline scan, a follow-up scan before deciding to stop prophylaxis, or a follow-up scan in the setting of recurrent gout flares despite reaching goal serum uric acid, may be cost-effective time points to perform diagnostic US,” he advised.

“Unfortunately,” he added, “reimbursement for diagnostic US has been decreasing over the years, which makes it challenging to increase diagnostic US to the [frequency of its use] in Europe.”

Asked how most gout care being provided by primary care doctors in the United States affects gout management, Chu said: “Depending on which guidelines one follows for treating gout — from the American College of Rheumatology or the American College of Physicians — one may be more or less likely to start urate-lowering therapy after the first gout flare.”

“Understanding MSU burden in each patient, or even seeing active inflammation at these sites by increased Doppler signal, may change the threshold for physicians to initiate therapy,” he added.

The study received no funding. Three authors have reported financial involvements with pharmaceutical companies. Cipolletta, a coauthor, and all the experts who provided comment, and who were not involved with the study, have reported no conflicts of interest.