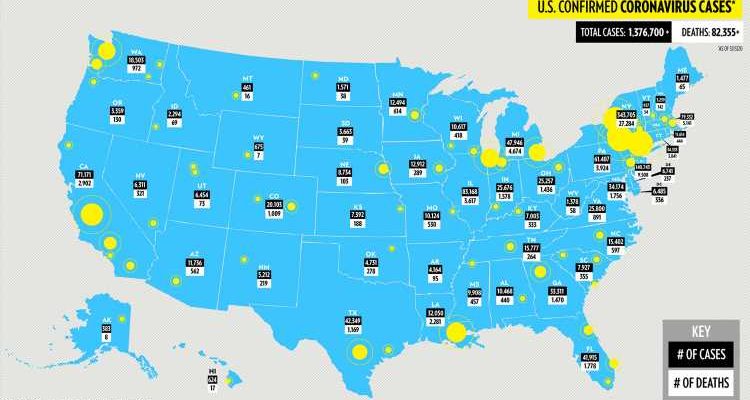 Worldwide, there are now at least 4,292,139 cases of coronavirus, and 293,241 deaths. The vast majority of cases and deaths had been confined to mainland China until the last three weeks, when major outbreaks occurred in South Korea, Italy and Iran. On March 19, Italy surpassed China in the number of deaths.

On April 2, the worldwide number of confirmed cases topped 1 million. It hit 2 million on April 15.

The increase in cases outside of China led the CDC to urge Americans to start preparing for the virus to spread in the U.S. with the “expectation that this will be bad.”

On March 11, President Donald Trump announced a ban on travel from the U.S. to Europe for 30 days to “keep new cases from entering our shores.” The CDC had already recommended that Americans cancel any non-essential travel to China, Iran, Italy and South Korea, and urged older Americans to avoid going to Japan. Additionally, they restricted foreign nationals from China and Iran from entering the U.S.

The U.S., Canada and Mexico also mutually agreed to close the shared borders to non-essential travel.

Trump declared a national state of emergency in the U.S. on March 13 as the number of cases rise. However, the true number of cases is unknown, largely due to a delay in available testing kits from the government.

Though China, Italy and several other nations with high case totals have enforced full lockdowns on citizens, Trump has declined to do so in the U.S. Instead, many states, counties and cities have chosen to implement “stay at home” orders, limiting residents with non-essential jobs from leaving their homes, except for groceries and other vital tasks.

At the end of April, several states began allowing businesses to reopen, despite warnings from health experts that social distancing is still needed to avoid a resurgence of infections.

The CDC also says that the best prevention methods, other than social distancing, are basic forms of hygiene — careful handwashing, avoiding touching the face, moving away from people who are coughing or sneezing and staying home at signs of illness. As of April 3, the health agency also recommended that Americans wear masks when going outside.

As information about the coronavirus pandemic rapidly changes, PEOPLE is committed to providing the most recent data in our coverage. Some of the information in this story may have changed after publication. For the latest on COVID-19, readers are encouraged to use online resources from CDC, WHO, and local public health departments. PEOPLE has partnered with GoFundMe to raise money for the COVID-19 Relief Fund, a GoFundMe.org fundraiser to support everything from frontline responders to families in need, as well as organizations helping communities. For more information or to donate, click here.