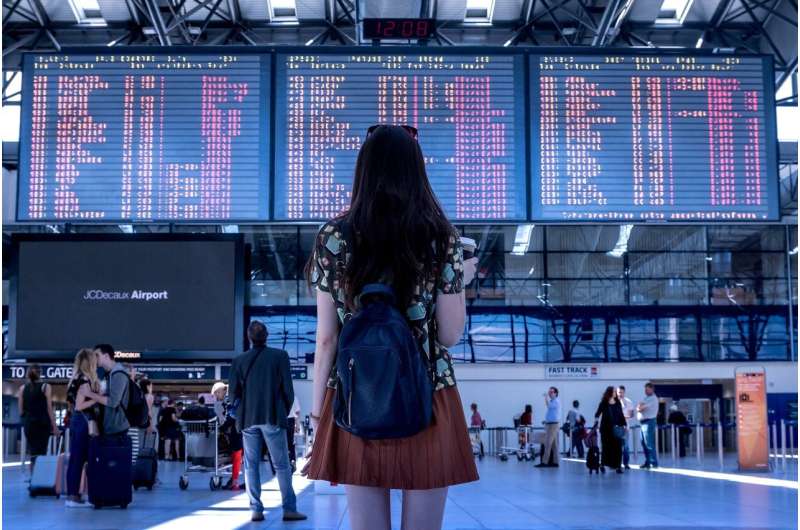 Canada’s restrictions on international travel drastically reduced the number of COVID-19 cases entering the country during the first waves of the pandemic but were insufficient to prevent new outbreaks, according to a new study led by University of British Columbia researchers.

The study, published today in eLife, used publicly available viral genome sequences to create a detailed timeline of how the virus was entering Canada from January 2020 to March 2021, and the resulting chains of transmission. The genomic data was used to identify the geographic origin of COVID-19 cases, enabling the identification of 2,263 instances where COVID-19 was imported into the country. It is the first national-level genomic analysis of COVID-19 epidemiology in Canada.

The findings shed new light on the effectiveness of Canada’s border measures, revealing that the number of COVID-19 cases entering Canada declined by 10-fold four weeks after restrictions barring the entry of most foreign nationals were implemented in March 2020.

“COVID-19 importations were accelerating in the lead up to March 2020, but experienced a sharp and drastic decline after travel restrictions were put in place,” says Angela McLaughlin, a Ph.D. candidate in bioinformatics at UBC and the study’s lead author. “The data shows that federal travel restrictions can be effective in reducing viral importations when implemented rapidly.”

Although COVID-19 importations were markedly reduced by travel restrictions, they were not eliminated and continued on at a lower level through the spring and summer of 2020. This seeded new chains of transmission that subsequently contributed greatly to the persistence of COVID-19 cases in the second wave. Importations rebounded further in November 2020, with the easing of entry exceptions for foreign nationals and quarantine shortening, bringing newly emergent variants of concern (VOCs) and interest (VOIs).

“Travel restrictions have a diminishing return if domestic transmission is high, if highly transmissible variants become widespread globally, or if there are many individuals exempt from travel restrictions and quarantine without access to rapid testing,” says McLaughlin.

By the end of February 2021, there had been an estimated 30 unique genetic sublineages of the Alpha variant (B.1.1.7) imported into Canada, which increasingly displaced the original SARS-CoV-2 virus by the second half of the second wave and into the third wave.

The researchers say that travel restrictions and quarantine periods would have needed to be sustained to fully curtail Canada’s COVID-19 burden, but ultimately, those restrictions come with a trade-off.

“The social and economic repercussions of travel restrictions must be weighed relative to the risk of unhampered viral importations, which have the potential to overburden the healthcare system,” says Mclaughlin.

Of the viral importations during the first COVID-19 wave, the data suggests that 49 percent likely originated from the U.S. and were primarily introduced into Quebec and Ontario. In the second COVID wave, the U.S. was still the predominant source of viral entry, at 43 percent, alongside a larger contribution from India, 16 percent, and the UK, at seven percent.

The study was led by researchers at UBC and the B.C. Centre for Excellence in HIV/AIDS (BC-CfE), alongside colleagues from Western University, the University of Arizona, and the Canadian COVID-19 Genomics Network (CanCOGeN). The researchers say the study provides important insight into the effectiveness of public health interventions that will help inform how we respond to future viral threats.