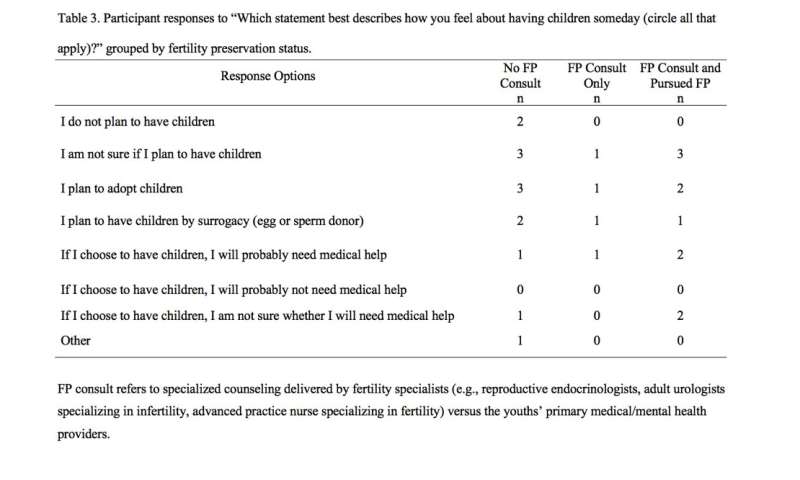 The last thing on most teens’ minds is whether or not they want to have kids someday. But transitioning transgender adolescents are forced to consider whether to preserve their sperm or eggs at a young age.

Whether or not they pursue fertility preservation is influenced by certain key factors, such as their family values, gender dysphoria, the cost of the procedure or not feeling ready to make such an important, lifelong decision at their age, reports a new study from Northwestern Medicine and the Ann & Robert H. Lurie Children’s Hospital of Chicago.

The findings shed light on how difficult this choice can be for such young adults (aged 15 to 24), and highlight the need to establish standardized protocols for primary care doctors when counseling transgender patients as they consider sex reassignment.

“As a child psychologist, I’m usually talking to adolescent patients about contraception to prevent unwanted pregnancies, not, ‘Down the line, do you want to be a parent? And if so, how important to you is a genetic connection to your child?’,” said first author Diane Chen, assistant professor of psychiatry and behavioral sciences and pediatrics at Northwestern University Feinberg School of Medicine and a pediatric psychologist at Lurie Children’s. “It can be difficult for kids who are transitioning in adolescence to have to be thinking about these things. It’s not developmentally typical.”

The study was published Monday, April 15, in the journal LGBT Health. It is the first study to use in-depth interviews rather than retrospective chart reviews to explore factors that impact fertility preservation decisions in transgender adolescents and young adults.

Fertility preservation only recently became an elective option for transgender youth. It can be difficult and ethically complex to approach the topic with adolescents, which is why Chen was drawn to the research.

“Potentially compromised fertility should not be a reason to prevent transgender adolescents from transitioning with hormones, but we should be taking steps to train doctors on how to talk to transgender youth about options for fertility presentation and support them in making these decisions,” Chen said.

This can be particularly complicated because it is not until a person is in their mid-20s that their frontal lobe is fully developed, which has led some to question whether adolescents and young adults can fully understand the potential implications of their decisions.

Additionally, doctors should consider referring some patients to see a specialized fertility counselor for support, Chen said. But even specialists might need to revamp their protocols to include more information, which, as one study participant said, can be lacking.

The study identified the following four key factors that influence transitioning transgender youth when deciding whether to pursue fertility preservation:

1.Either knowing they wanted biological children or weren’t sure

2.Family values such as a parent encouraging or pressuring them to consider fertility preservation

3.The cost of the procedure and storage of their eggs or sperm

A trans male who was assigned female at birth and wants to preserve his eggs, for instance, will need to go through a cycle of hormonal stimulation and egg retrieval similar to a woman pursuing in vitro fertilization due to infertility, which Chen said can be quite invasive.

Determining fertility options at a young age is not a new concept. For years, female pediatric cancer patients at Northwestern’s Oncofertility Consortium have received consultation about whether and how to preserve their eggs before undergoing their cancer treatment.