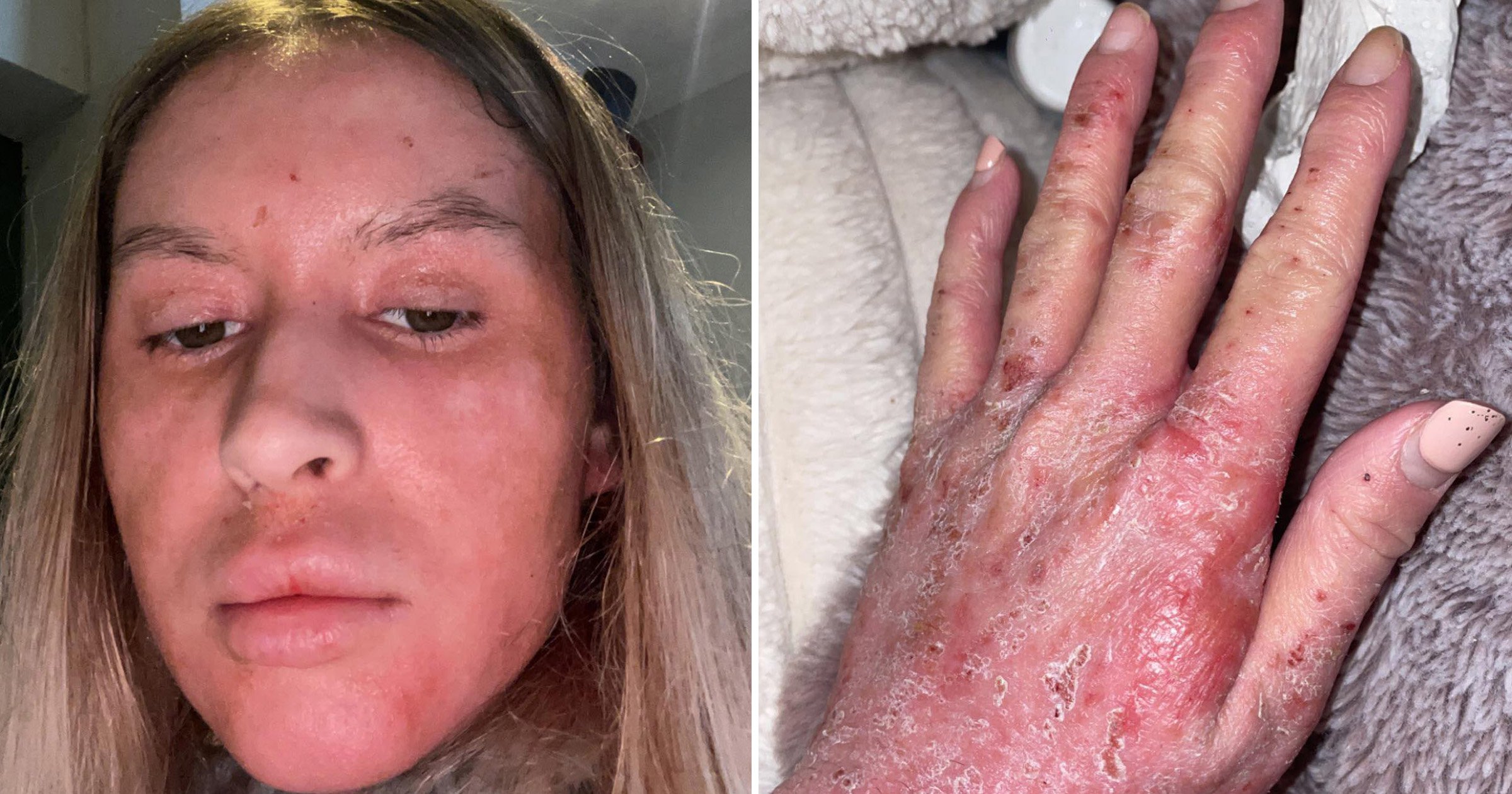 A young woman has shared the ‘horrific’ symptoms she suffered after her eczema creams allegedly caused her skin to ‘ooze’ and her hair to fall out.

Emily Gardiner-Walsh, 21, a nursery practitioner from Southampton, started suffering with eczema as a baby and was subsequently given topical steroid creams to help soothe symptoms.

But it wasn’t until 2022 that the young mum began suffering from painful side effects she believes are due to the medication, just three months after giving birth to her son.

Red, blotchy patches of skin that looked ‘the sunburn’ spread across Emily’s entire body, which prompted her to go to the doctor blood tests.

After being told it was ‘just eczema’, she searched online for answers and found out out the steroid creams she’d been using for the condition for over two decades may be to blame, so decided to stop using them.

She recalled: ‘The pain was like my whole body was on fire. The nerve pain was the worst – it felt like loads of electric shocks running through my body and I couldn’t keep still.

‘It was difficult to look after my son when I was in so much pain as I didn’t want to move.

‘Every movement I made hurt so badly, and I would have to be wrapped up warm as the cold air would burn me and sting.’

As well as battling her physical symptoms, Emily’s self-confidence took a knock as a result of her changed appearance.

‘My whole face looked like a different person and my skin was covered in cuts and lesions, and would shed so badly,’ she said. ‘My self-esteem wasn’t great.’

Emily now wants to raise awareness of the dangers of TSW and ensure medical professionals warn patients about risks.

The symptoms may occur in people who apply topical steroids for two weeks or longer, although not much is known about why some people suffer while others don’t.

As steroid creams are often the first port of call for doctors when presented with skin conditions, Emily believes the consequences of overuse are not made clear enough before prescribing.

She said: ‘When I was first prescribed the creams at three months old, we were told to apply them wherever and whenever we needed to.

‘My skin was so bad that I would have to be wrapped up in bandages and smothered in creams.’

Over the years her eczema improved, but by October 2017 Emily was bedbound for weeks with a resurgence of red, oozing skin and hair loss.

‘The doctors gave me tubes full of steroid creams and tablets and it went away,’ explained Emily. ‘I didn’t know it was TSW at the time.’

After this, her skin was ‘amazing’ – until she gave birth and noticed the redness reappearing.

Emily said: ‘It spread to my chest and slowly covered my whole body with only a small patch of normal skin on my back.

‘My lymph nodes in my neck were very swollen and I could hardly move my neck left or right. My skin started to get very dry and flaky – I tried every type of moisturiser and it would just be dry again after five minutes.’

Terrified something was extremely wrong, and feeling like she wasn’t getting answers from doctors, Emily researched online and discovered people talking about TSW.

She ceased using them once and for all in August, but within a few days went ‘downhill massively,’ experiencing dry, shedding, oozing and weeping skin, swollen eyelids, insomnia, skin infections, and bruising.

It took Emily’s skin five months to heal, but she wishes she had known more about the side effect prior to using the creams.

‘I was lucky enough to go through this for only just over five months and I know many more people have gone months to years until they see improvements,’ she said.

‘I am now doing a lot better and have been seeing amazing improvements in my skin and now have my sleep back.’

While Emily gets the odd flare-up of red skin, she says things are ‘nothing like before’.

She added: ‘Having to go through this has been very difficult and painful and I’ve had a lot of anger as I wish that this condition was looked into more as it has destroyed so many lives.’