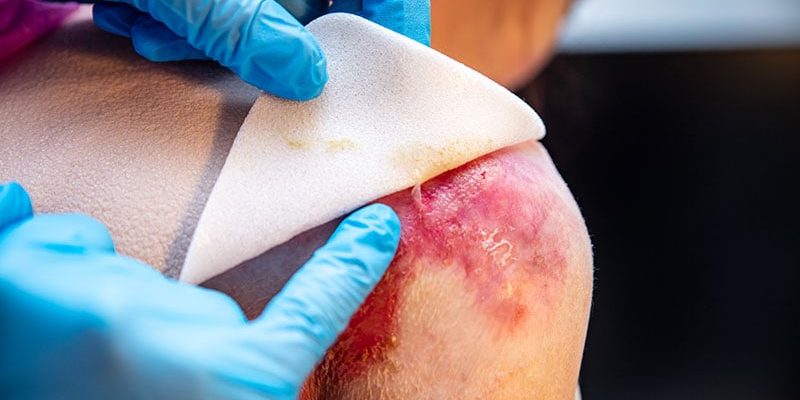 People with untreatable dystrophic epidermolysis bullosa (DEB) may soon have access to an investigational gene therapy delivered in a topical gel that is currently under review by the US Food and Drug Administration (FDA).

In a phase 3 study of patients with DEB, “we found that repeated topical application of B-VEC [beremagene geperpavec], an HSV-1–based gene therapy, resulted in a greater likelihood of complete wound healing than the topical application of placebo at up to 6 months,” the study authors write. The study was published in The New England Journal of Medicine on December 15. “Longer and larger trials are warranted to determine the durability of effect and risks of this approach,” the authors note.

“In the past, DEB was a very specialized disease that only a handful of dermatologists would see but could not do much to treat,” he said. “With gene therapy, many more dermatologists who may not be familiar with DEB will be able to treat these patients in their offices.” It is expected that nurses will be able to administer the treatment to patients at home, he added.

DEB, a rare disease that affects 1 to 3 persons per million in the United States, is caused by mutations in the COL7A1 gene that encodes the alpha-1 chain of collagen type VII (C7) protein. C7 forms the anchoring fibrils that attach the epidermis to the underlying dermal connective tissue.

COL71A mutations that lead to defective, decreased, or absent C7 can make the skin so fragile it tears with the slightest touch. This has led to patients being called “butterfly children.” Epithelial tissues blister and scar, causing esophageal and genitourinary strictures, adhesion of digits, malnutrition, anemia, infection, and bothersome itch and pain. Morbidity and mortality are high. The leading cause of death in adults is chronic wounds leading to aggressive squamous cell cancers.

The First Therapy for DEB, Under FDA Review

On the basis of manufacturing information submitted to the FDA in December 2022, the agency extended the date for a decision on approval by 3 months, to May 19, 2023, according to a statement from Krystal Biotech, the developer of B-VEC and the sponsor of the NEJM study.

Marinkovich and his colleagues conducted the double-blind, randomized, controlled GEM-3 trial of B-VEC at three sites in the United States. The 31 study participants ranged in age from 1 to 44 years (median age, 16 years) and had genetically confirmed DEB (30 with the recessive form and one with the dominant form).

For each participant, a pair of wounds was chosen that were matched in size, region, and appearance. The wounds within each pair were randomly allocated to receive weekly applications of either B-VEC or placebo gel for 26 weeks.

The results of the study included the following:

“With the ability to treat patients with topical gene therapy, dermatology is entering a new age of treatment possibilities,” Marinkovich said in the interview.

The researchers were surprised that the redosable in vivo gene therapy worked so well, he added. In vivo gene therapy has been plagued by the occurrence of immune reactions against the viral vectors used, Marinkovich explained. But because the herpes simplex virus has evolved to evade the immune system, his team could use the viral vector every week for six months without inflammatory reactions.

“The immune system’s inability to fight off or get rid of the herpes simplex vector makes it bad as a disease, but as a gene therapy vector, it provides a huge advantage,” he added.

Asked to comment on the results, Christen Ebens, MD, MPH, assistant professor in the Department of Pediatrics at the University of Minnesota, Minneapolis, whose clinical and research interests include EB, called the results exciting for patients, families, and doctors.

“Side effects were minimal, and importantly, use of the replication-incompetent HSV vector means that the payload gene does not integrate into the patient’s DNA,” Ebens, who was not involved in the study, said in an interview. “B-VEC is not a lifelong cure but potentially an effective maintenance therapy requiring repeated doses,” she added.

Although the researchers found no clinically important immune reactions to B-VEC, Ebens said she would like to see results from longer studies of the treatment. “We will want to see that patients do not produce neutralizing antibodies against B-VEC or its components, as such antibodies may yield the treatment ineffective or cause significant side effects.”

In an interview, Vanessa R. Holland, MD, associate clinical professor in the Division of Dermatology at UCLA Health, Burbank, California, who was also not involved in the study, said that “topical replication-defective HSV-1 is a brilliant vector to deliver the depleted collagen.” She added that “such a vehicle may significantly alter management of these disorders and improve or extend lives by minimizing potentially fatal complications.”

Paras P. Vakharia, MD, PharmD, assistant professor of dermatology at Northwestern University, Chicago, who was also not involved in the study, was surprised by the high percentage of healed wounds and wounds that remained healed over time.

In an interview, Vakharia added that he’d like to know whether patients develop antibodies against HSV and C7 with long-term treatment and whether problems will arise related to drug availability.

B-VEC for Treating Other Conditions

Marinkovich noted that an ongoing phase 1 clinical trial, also sponsored by Krystal Biotech, is using the HSV-1 vector to deliver a different biologic (KB105) to establish dose and safety in the treatment of ichthyosis. He added that he would like to explore the use of B-VEC to treat DEB at mucosal surfaces, including inside the mouth, the eye, and the esophagus.

Authors of two editorials that accompanied the study also referred to other conditions B-VEC might treat.

This study “highlights potential future investigations,” David V. Schaffer, PhD, professor of chemical and biomolecular engineering, bioengineering, and molecular and cell biology at the University of California, Berkeley, writes in one of the editorials.

Important considerations he mentioned include the likelihood of the treatment becoming lifelong; the inability of HSV to penetrate intact skin, making B-VEC unsuitable for preventing the development of new wounds; and the inability of this treatment to treat EB lesions along the digestive tract. “This important trial builds on and extends gene-therapy successes to new targets and vectors, an advance for patients,” he adds.

In the second editorial, Aimee S. Payne, MD, PhD, professor of dermatology at the University of Pennsylvania, Philadelphia, raised the question of whether B-VEC’s clinical success for treating DEB can translate to other genetic diseases.

“Formulations for ophthalmic, oral-gastrointestinal, or respiratory delivery would be of great value to address the extracutaneous manifestations of epidermolysis bullosa and other genetic diseases,” she writes.

Referring to an ongoing trial of a topical gene therapy for cystic fibrosis that is delivered by a nebulizer, Payne noted, “Ultimately, the completion of clinical trials such as this one will be required to determine whether HSV-1–mediated gene delivery can go more than skin deep.”

Earlier data and more details of the study were presented in a poster at the annual meeting of the Society for Pediatric Dermatology in July 2022.