Samantha Markle gives an update on her father after stroke

On Sunday, the fit-looking Arnold, 63, was spotted cycling with his old co-star Arnold Schwarzenegger on a cycle route in California. The two of them were on a break while filming for an upcoming Netflix Series called Utap. They first worked together over 28 years ago for James Cameron’s film True Lies. In January Arnold suffered a “mini-stroke” that first manifested as a loss of vision in his right eye.

“It all started in January. I was giving the kids a bath and turned around to count to 10 when suddenly my vision in my right eye went black as if there was a curtain coming down over my eye,” the Nine Months actor told US Weekly earlier this month.

“I had a mini-stroke. I checked into the hospital for the 24-hour stroke protocol. As a 63-year-old single father of a 9 and 6-year-old, it was scary.

“On top of all this, I had massive organ failure two years ago. My doctor changed my medication, but I knew I needed to make bigger changes because I really dropped the ball on self-care.”

A transient ischemic attack, commonly known as a “mini-stoke” occurs when the blood flow to parts of the brain is restricted for a little while. 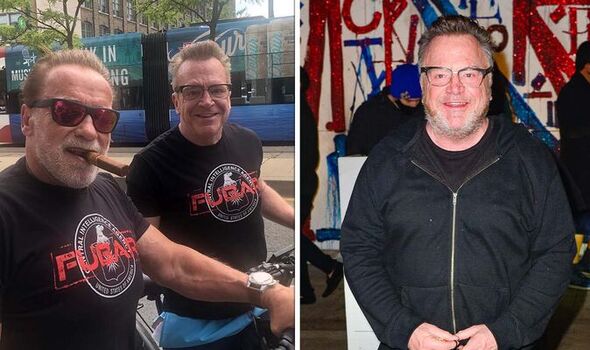 When this occurs, the brain is starved of oxygen – causing speech problems, numbness of the face and, as Arnold experienced, visual problems, explains the NHS.

Although the star was told the stroke was not “major” he told People magazine last week it was “scary” enough to push him to make changes.

After his recovery in the hospital, the star kick-started his weight loss journey with Charles D’Angelo – a life coach he met back in 2018 at Arnold Schwarzenegger’s house.

He has dropped from around 20 stone to 15 since his health journey with D’Angelo began.

He said: “We all know what we need to be doing, but getting yourself to do it can be a different story.

“Having someone in your corner who cheers you on but also calls you out and challenges you is crucial. Charles has been that for me.

“I can move better, I have more energy, I feel better in my clothes, I sleep better, and I think I’ve probably added years to my life to be here for my kids. I used to only look at my face in the mirror, which was hard enough, but now I face the whole thing.”

Transient ischemic attacks are known to be a sign that another, more major stroke may be on its way.

Roughly one to two in 10 people who suffer a (TIA) and do not receive treatment will have a full-blown stroke within the following year, according to the NHS. 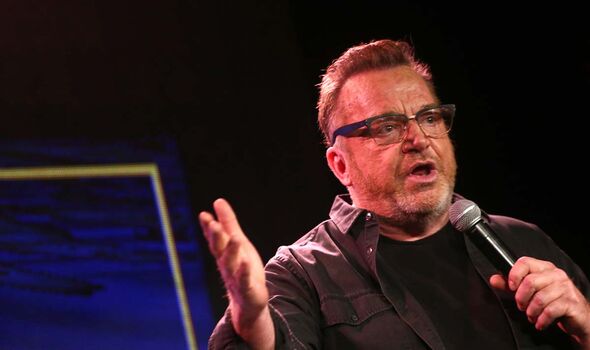 There are several lifestyle changes that TIA sufferers can make to avoid a more serious stroke.

Becoming physically active can lower the risk of stroke according to research.

Even for people who have suffered from a stroke already, doing more exercise can prevent having another one.

The NHS recommends making dietary changes as unhealthy diets increase the risk of stroke. A bad diet is likely to raise your blood pressure and cholesterol level – two factors that increase the likelihood of stroke.

High blood pressure can cause the arteries providing blood to the brain to become blocked.

The health body states: “A low-fat, high-fibre diet is usually recommended, including at least 5 portions of fresh fruit and vegetables each day, plus wholegrains.”

Smoking is another factor, which increases the risk of a full-blown stroke. It has been shown to narrow your arteries — which is thought by researchers to increase your blood pressure and make a blood clot more likely.