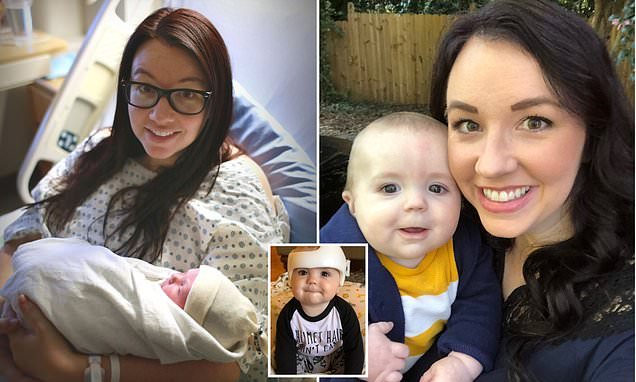 A toddler with a rare chromosome condition has proved doctors wrong after the said he would likely never be able to crawl, sit-up, walk or talk.

Ethan Bothe, one years old, was discovered to have rare distal chromosome 18q deletion syndrome, which occurs in around one in 55,000 births worldwide.

His parents, Jennifer Bothe, 32, and Kyle Bothe, 34, of North Carolina, were devastated when doctors said Ethan would need therapy for the rest of his life.

Although Ethan has severe development problems, he has reached milestone his medic’s thought he may never achieve.

He started to crawl in February this year and can now pull himself up to stand and can say, ‘mama’ and ‘dada’.

It’s left his geneticist and parents awe-struck – who now wonder why doctors were so sympathetic for their child. 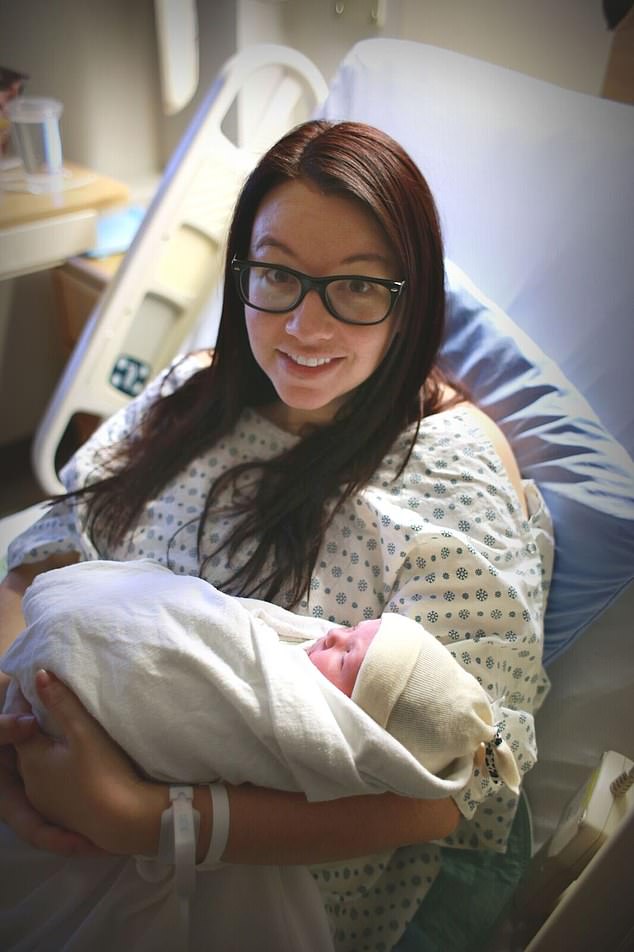 When Ethan Bothe was born in March 2018, his parents, Jennifer Bothe, 32, and Kyle Bothe, 34, of North Carolina, were devastated when doctors said he would likely never be able to crawl, sit-up, walk or talk. Pictured in hospital at birth 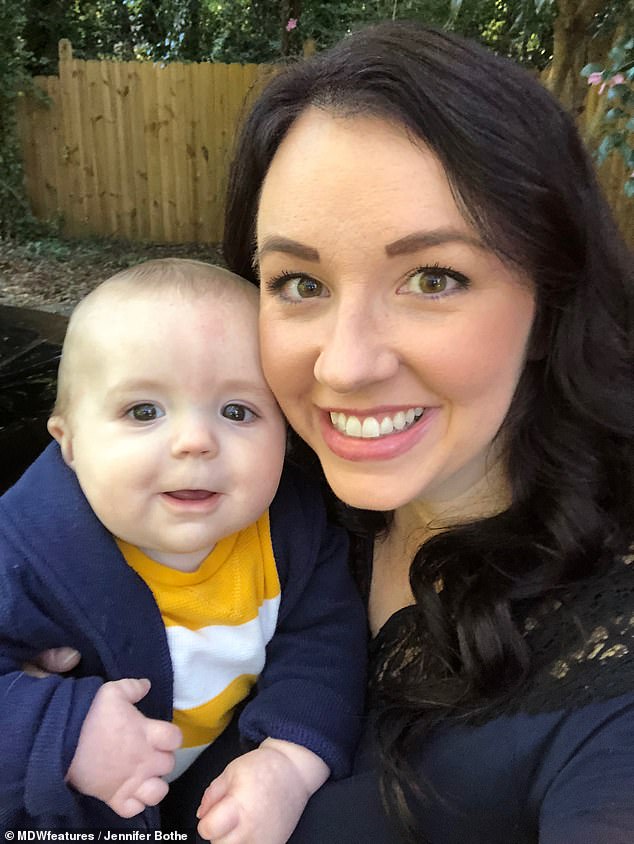 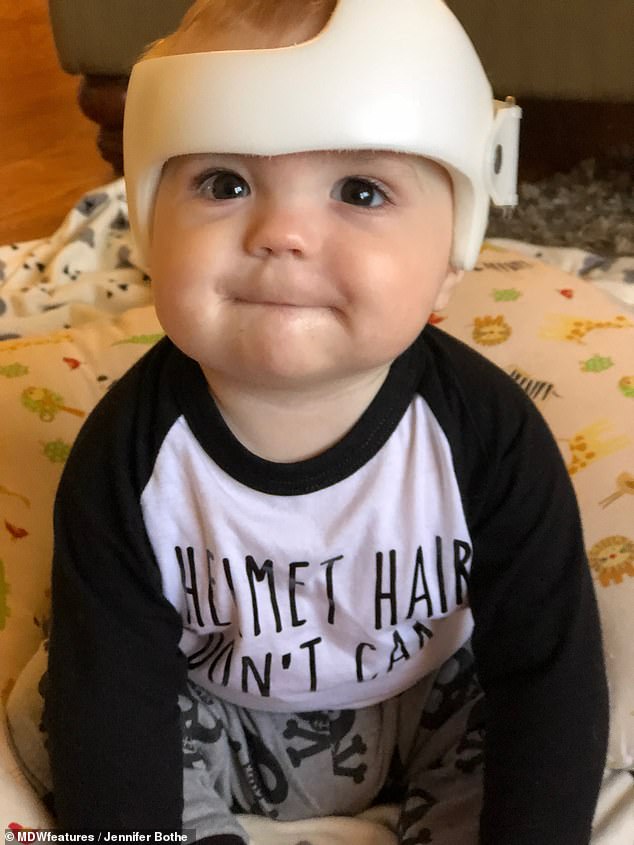 The condition leads to hand, food, face and head abnormalities, and Ethan must wear a cranial helmet (pictured) as his head was starting to develop abnormally

‘I was completely overwhelmed with emotion every time Ethan achieved something we knew was infinitely difficult for him.

‘I’ve since heard that in medical school they train doctors to say, “I’m sorry” when they are delivering a diagnosis like this.

‘But I firmly believe that needs to change. Parent’s don’t want sympathy for the existence of their child and saying, “I’m sorry” makes it seem like there’s something devastating to be sorry for, when in fact, these babies can teach us more about love, acceptance and inclusion than anything or anyone else in this world.’

Chromosome 18q deletion is a rare genetic condition that leads to a variety of medical conditions.

It is a chromosomal disorder in which there is a deletion of part of the long arm of chromosome 18.

According to the U.S. National Library of Medicine, chromosome 18q deletion occurs in approximately one in 55,000 newborns worldwide.

Since the disorder was originally reported in the medical literature in 1964, more than 80 cases have been recorded, according the the National Organisation for Rare Disorders.

It can be inherited from either parent but can also be ‘de novo’, which means that it is unique to the person effected.

In 2017 Mrs Bothe fell pregnant for a second time after welcoming her and Mr Bothe’s first child, Ella, now three, in 2016.

A routine genetic screening early in her pregnancy indicated red flags that couldn’t be identified without further testing which showed her unborn son had one kidney.

Ethan was born in March 2018 and in the months that followed he underwent further testing.

Mrs Bothe said: ‘We knew something was not one hundred per cent with Ethan, but we didn’t have a name for it until this meeting with the geneticist.

‘Frankly, Kyle and I were both really positive it was nothing big.’

In July 2018 Jennifer and Kyle attended their first geneticist appointment.

Mrs Bothe said: ‘When we sat down with the geneticist she said, “I’m very sorry to tell you this but your son has a rare genetic condition called chromosome 18q deletion syndrome”.’

The couple were told that Ethan’s condition, along with hypotonia, which is very low muscle tone, would mean it was unlikely he would ever be able to sit up, crawl, stand, walk or talk and that he might lose his sight and hearing.

There is a high risk of him losing his vision, and his hearing as he gets older and he will be very short in stature because he will probably have low growth hormone. 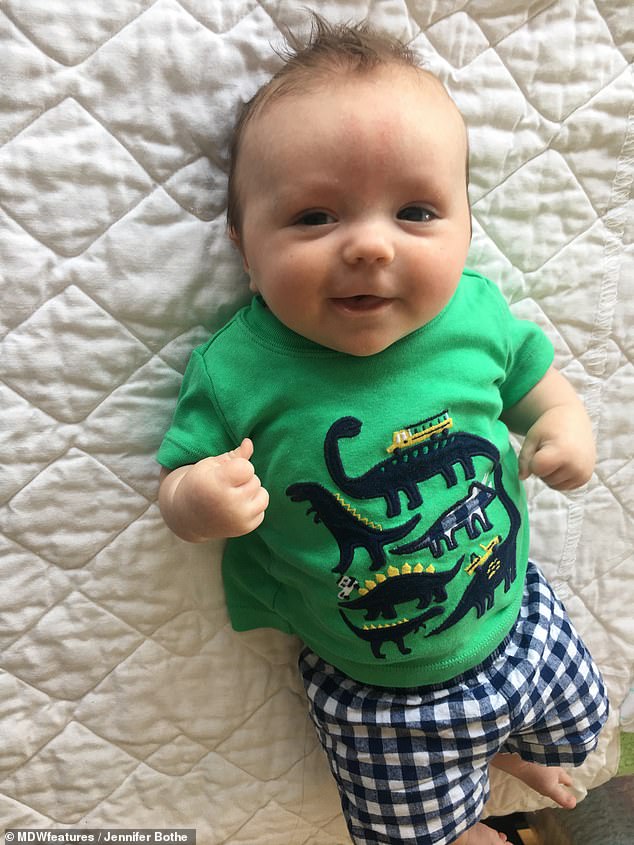 Mr and Mrs Bothe were told in July 2018 that Ethan had the syndrome after having genetic testing. They were shocked as the only thing that had been noticed at birth was camptodactyly – a medical condition that causes one or more fingers to be permanently bent. Mrs Bothe said she ‘crumbled’ and felt like her child had died 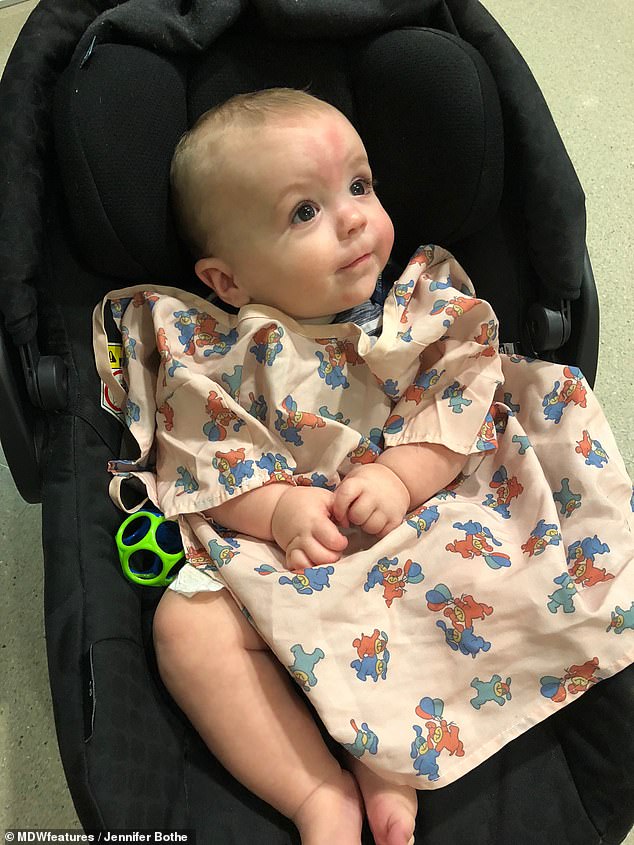 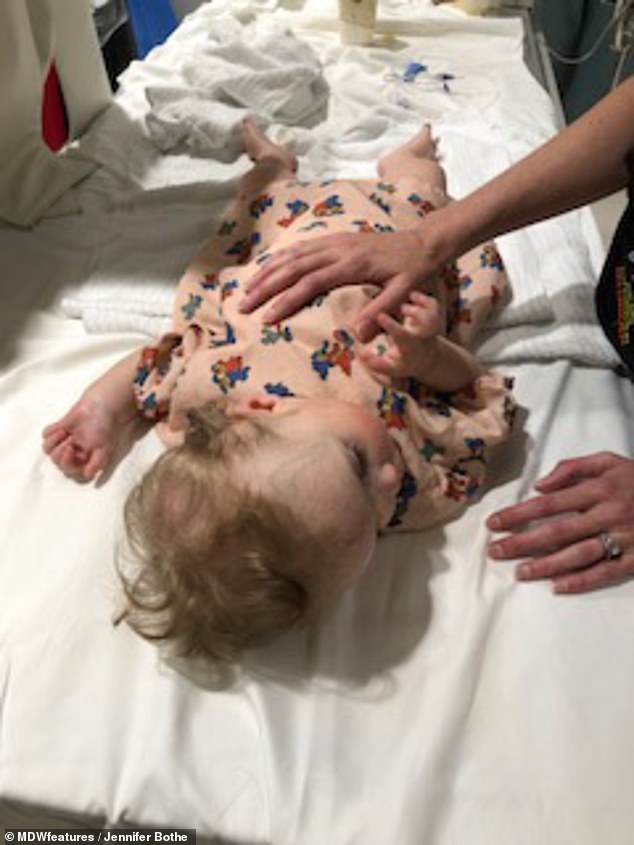 The couple were told that Ethan’s condition, along with hypotonia, which is very low muscle tone, would mean it was unlikely he would ever be able to sit up, crawl, stand, walk or talk and that he might lose his sight and hearing. Pictured in hospital

On top of this, the doctors said he will never have children, and certainly will never live an independent life.

Mrs Bothe said: ‘I felt like I had been hit with a ton of bricks. Just hours before this appointment Kyle and I had been discussing how lucky we were that Ethan had examined so well.

‘I had worried for nine months of pregnancy only to feel an overwhelming sense of relief when we were told he seemed to “check out fine” and now I was being told he had an extremely complicated genetic condition.

‘Under the weight of the doctor’s words I just crumbled. In that moment I felt my heart shatter into a million pieces and I cried.

‘It was a cry so completely full of anguish and heartache because I felt like someone had told me my baby had died.’

Over the past year, Ethan has had countless tests and doctor appointments to determine how his condition is affecting him as well as needing intensive therapy including physical, speech and feeding. 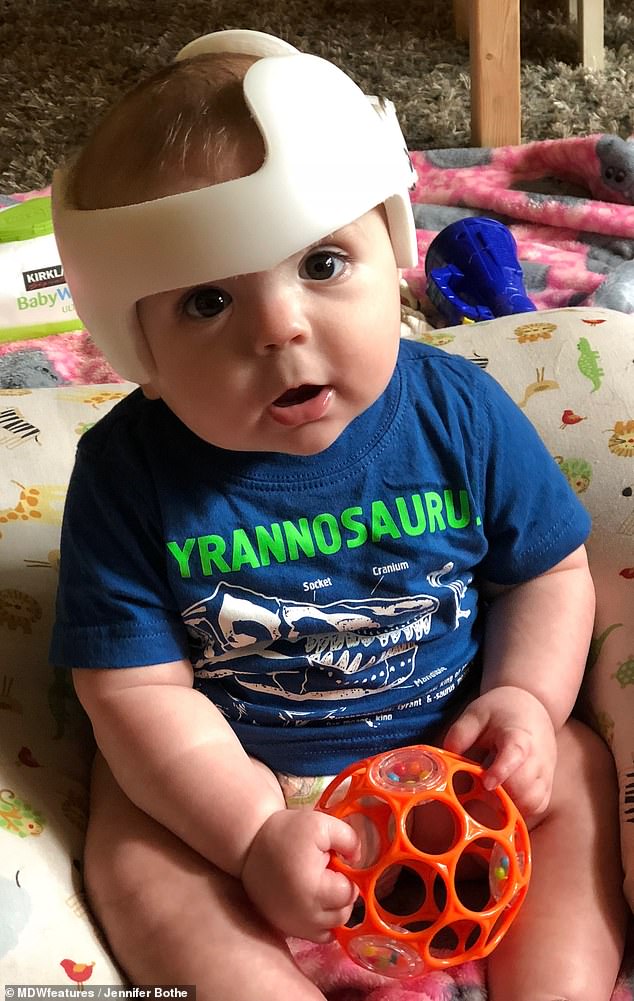 Ethan wears a helmet because he had extreme torticollis, meaning the muscles on one side of his neck were extremely tight, which lead to plagiocephaly, an asymmetrical distortion of the skull 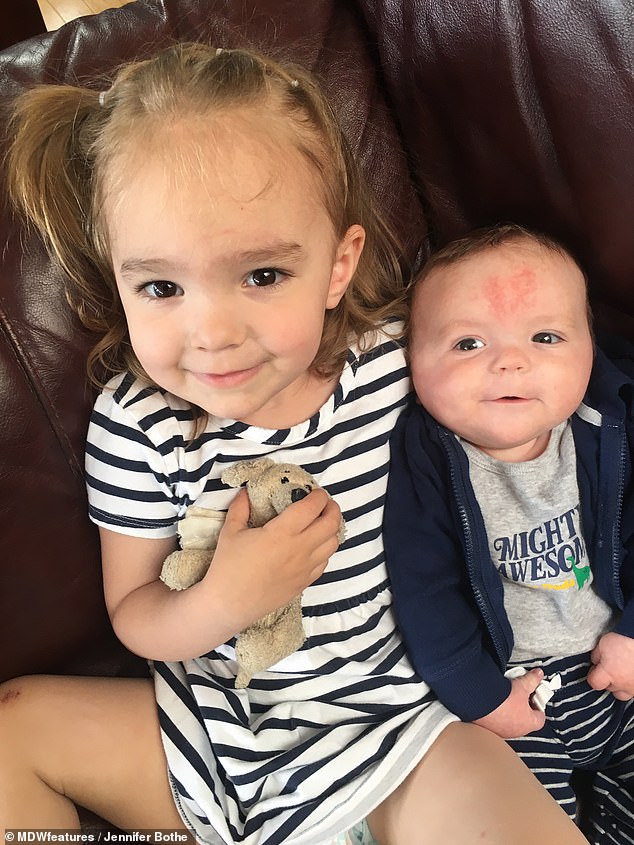 Ethan has managed to learn how to wave, clap and shake his head as well as saying his three-year-old sister’s name, Ella. The most heartwarming thing to see the siblings play, Mrs Bothe said 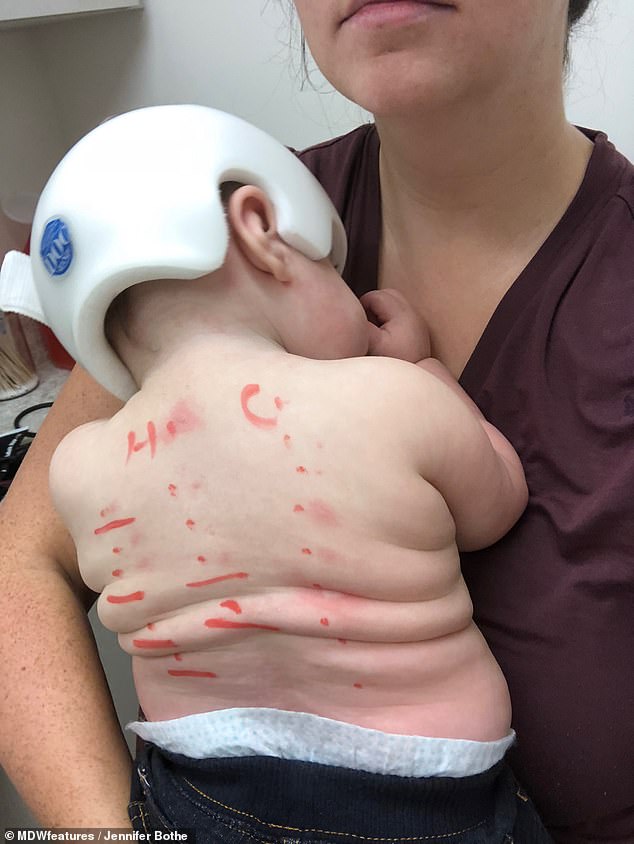 Ethan has allergies, reflux, kidney problems and a growth deficiency. Pictured, having allergy tests in hospital

Ethan has camptodactyly, which means his fingers are permanently bent making it difficult to use his hands like other children, allergies, reflux, kidney problems and a growth deficiency.

He has been wearing a cranial helmet as his head was starting to develop asymmetrically.

He his low muscle tone makes it difficult for him to achieve his motor milestones and there are abnormalities in his feet – which have not yet been fully understood.

Mrs Bothe said: ‘The first therapy Ethan participated in was chiropractic care. He had extreme torticollis, meaning the muscles on one side of his neck were extremely tight, which lead to plagiocephaly (an asymmetrical distortion of the skull).

‘This is why he wears a cranial helmet.

But remarkably Ethan takes everything in his stride with a smile on his face and his arrival has made the family stronger.

Ethan has managed to learn how to wave, clap and shake his head as well as saying his sister’s name.

In December 2018, a geneticist was amazed at Ethan’s progress, according to Mrs Bothe, and his ability to sit up far exceeded the expectations of his diagnosis for his age.

Mrs Bothe said: ‘I wish I could go back to that moment [the diagnosis] and tell that sobbing heartbroken woman what I know now.

‘I wish I could tell her that Ethan would be one of the greatest gifts of her life, and that he would teach her more about love and patience, strength and resilience than she would ever know. 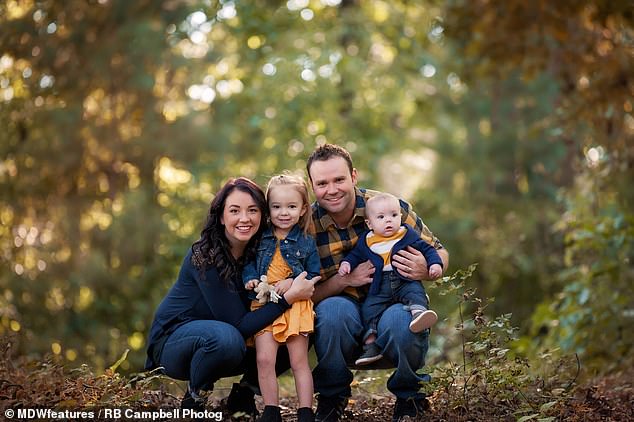 Ethan takes everything in his stride with a smile on his face and his arrival has made the family stronger. Pictured, Mr and Mrs Bothe, Ethan and Ella 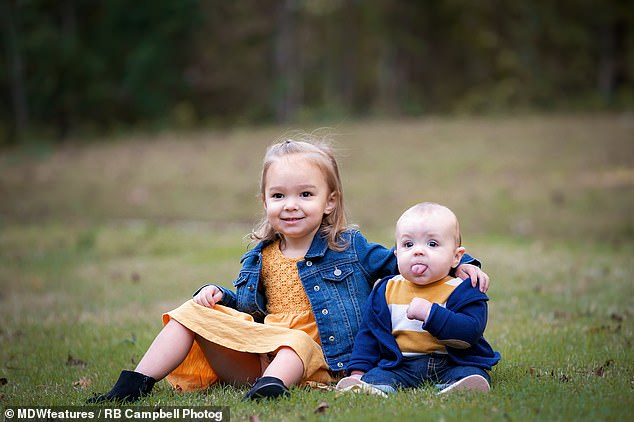 Mrs Bothe said: ‘I was completely overwhelmed with emotion every time Ethan achieved something we knew was infinitely difficult for him’

‘I’ve come to realise that Ethan was not the baby that I expected to have. He is so, so much more.’

The most heartwarming thing to see is Ethan and his older sister, Ella, playing.

Mrs Bothe said: ‘Ethan is awe-struck by his sister Ella. As a mother, it is unbelievably heart-warming to see the two of them interact.

‘She is the perfect sister for him. I think even at only three years old she senses his vulnerability, which allows her to be extremely empathetic and caring.’

Mrs Bothe shared her words of advice to other families who might be going through a similar situation and to the doctor who gave them such a bleak prognosis.

She said: ‘I would tell the doctor to just work on their delivery a little more, to put themselves in the shoes of the parents who they are talking to, and to understand how difficult hearing an unexpected diagnosis would be for them.

‘Children are so resilient and so much stronger than we give them credit for.  Miracles happen every day, so never give up on your child.’