• Years of frequently eating fast food caught up to Anthony Brown, with his weight eventually topping out at more than 375 pounds.
• After learning how to maintain a calorie deficit, he made simple changes to his diet to eat healthier and lose weight.
• Now weighing less than 200 pounds, Brown has completed a dramatic weight loss transformation and is still committed to calorie counting and intermittent fasting.

Anthony Brown was always a “big guy.” Growing up, the 35-year-old information technology worker and part-time personal trainer was always taller than his peers; he graduated high school at 6’5” and 265 pounds. With the newfound freedom of his post-school years, he indulged in plenty of fast food meals—think, a breakfast of three McDonald’s Sausage Egg and Cheese Sandwiches, two hash browns, and a large Dr. Pepper; dinner might be 8 slices of pizza along with wings and breadsticks—and hours of video gaming.

The weight, no surprise, crept up on him. “I gradually went from wearing 2 XL T-shirts to 4XL t-shirts,” Brown says, while his waistline went from 40 to 48 inches. In high school, show choir had helped keep him active; now, he was working a desk job and spending his money on what he liked—fast food. Even as he started shopping the big and tall section, he rationalized away the changes—baggy jeans are in style, right? And he was a big guy.

The turning point came in 2010, when his sister was diagnosed with diabetes. She was just as tall as he was, but not nearly as overweight, yet she now faced a life-alerting disease. “I knew at this moment, I was on borrowed time,” he says, “and something had to change if I wanted to save my own life.” He didn’t know how much he weighed, so he bought a scale with a maximum capacity of 375 pounds. When he stepped on it, it read “ERR”—he was more than the scale could weigh.

As he researched healthier diets, he realized he couldn’t picture himself eating chicken breast, oatmeal, rice, and broccoli for the rest of his life. So he focused on establishing a calorie deficit. At 275 pounds, he figured his body needed 3400 calories a day; instead, he’d give it 2400, however he got them. “My only rules were: Stay in a calorie deficit, and if you can’t count it, don’t eat it,” he says. He still swears by those rules. 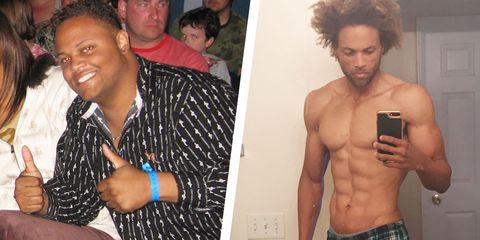 In sixth months, he was down to around 300 pounds—without workouts. “Like most overweight people,” he says, “I was afraid of the gym. I didn’t want to be the ‘fat guy’ that everyone would laugh at.” Instead he eased into 3 days a week at his apartment building’s fitness center, until those weights were no longer heavy enough, and he moved to a bigger gym.

In about two and a half years, he dropped 185 pounds, hitting 195 pounds—almost half his previous size. He’d gone from 38 percent body fat to four percent. “More importantly,” he says, “by continuing to work out, calorie count, and implementing intermittent fasting, I have managed to keep it off and maintain my physique for seven years.”

“I remember being obese and feeling helpless,” he says, “and I don’t want others to feel the way I felt. I want them to know there is someone out there that identifies with them, that managed to make it, and that they can too.”