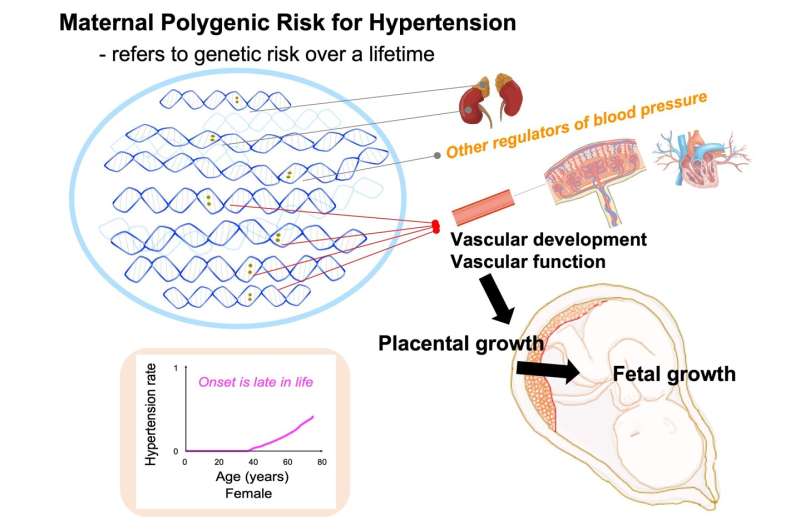 Cardiovascular diseases are the leading cause of death worldwide. Although the development of these disorders is most commonly associated with lifestyle factors like obesity, increasing evidence suggests that events much earlier in one’s life can also play a role. In a recent article published in BMC Medicine, a team led by researchers at Tokyo Medical and Dental University (TMDU) investigated how low birth weight and fetal growth restriction may result from the mother having certain variants of hypertension-related genes. Interestingly, these consequences can occur despite the mother not having high blood pressure during the course of the pregnancy.

Genetic factors from the mother can affect her child through directly passing down certain alleles, but they can also do so indirectly via the intrauterine environment. Studies examining such phenomena have recently suggested that women having genes related to hypertension risk are more likely to give birth to children with low birth weight. Researchers and clinicians therefore assumed that mothers with higher systolic blood pressure would have lower weight newborns. However, no such association was observed. This caused the TMDU group to believe that the intrauterine environment plays more of a role in this case. They hypothesized that all of these observations were caused by effects on the placenta.

“We focused on the placenta because it is an extremely vascular organ. Placental weight also frequently correlates with birth weight,” says Noriko Sato, Associate Professor in the Department of Molecular Epidemiology, who led the study. “Genome-wide association studies have shown that many blood pressure-related genes are involved in vascular system development and function.”

The researchers examined fetal growth in a cohort of Japanese individuals. They used a person’s genetic risk of developing hypertension over a lifetime, called a polygenic risk score, to examine how maternal genetic score influenced placental weight and birth weight. Then the mediating role of the placenta regarding influence on birth weight was formally verified by the method, called a causal mediation analysis.

“We also focused on genetic variants of vascular-related blood pressure genes to see if the impact on birth weight could be ultimately through influence on placental growth,” explains senior author Naoyuki Miyasaka, Professor in Comprehensive Reproductive Medicine. “Nearly 100% of the effect of “vasculature-related” genetic score on birth weight was indeed mediated by placental weight.”

The team also found an inverse association between maternal systolic blood pressure genetic risk score and the rate of fetal growth towards the end of pregnancy, specifically around 36 weeks of gestation.

“Our findings suggest that the maternal blood pressure-related genes are associated with undesirable fetal growth deceleration by affecting the placental growth,” explains Sato. “The intrauterine environment constructed by the placental vasculature is the primarily relevant factor here rather than the mother’s blood pressure at the time of pregnancy.”