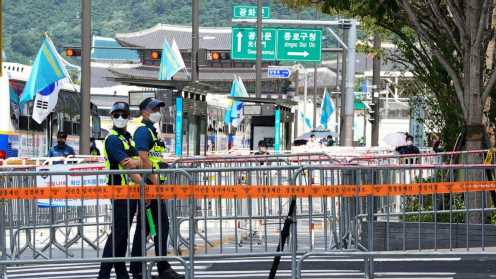 LONDON — People in England who are fully vaccinated against COVID-19, or are under 18 years of age, will no longer have to self-isolate if they come into contact with someone who has tested positive for the coronavirus.

The change, which came into effect on Monday, has been welcomed by businesses, many of which have suffered staff shortages as a result of the requirement for people to spend 10 days in quarantine if they have been a contact of a positive case.

The change to the rules applies to those who received their final dose at least 14 days prior to contact with a positive case.

People are still advised, though not compelled, to take a PCR test if they find out they have been in contact with a positive case. People who test positive will still be legally required to self-isolate.

The other nations of the U.K. — Scotland, Wales and Northern Ireland — are taking, or have taken, similar steps.

MORE ON THE PANDEMIC:

— US mulls COVID vaccine boosters for elderly as early as fall

— Amid a limited supply of vaccines, tensions arise in Africa between those seeking first and second vaccine shots

HERE’S WHAT ELSE IS HAPPENING:

TEHRAN, Iran — Iran has recorded a record high number of deaths from COVID-19 for a second day in a row.

The official IRNA news agency said Monday that 655 patients died in the previous 24 hours, and health workers found some 41,194 new cases over the same period. On Sunday, Iran reported 620 deaths.

The report came as the country imposed a five-day lockdown starting Monday. It includes a travel ban on personal cars crossing between provinces.

The new surge has been fueled by the contagious delta variant. Iranian authorities say less than 40% of the population follows measures such as wearing face masks and social distancing. Iranian health officials have regularly warned that hospitals in the capital, Tehran, and other major cities are overwhelmed with COVID-19 patients.

This is the fifth wave of coronavirus infections as the country struggles to vaccinate its people. Some 4% of Iranians have been fully vaccinated.

BERLIN — Germany’s standing committee on vaccination, the Stiko, has given the go-ahead for all young people above the age of 12 to get vaccinated against the coronavirus.

The country’s disease control agency said Monday the Stiko found that especially data from the United States, where almost 10 million adolescents have been vaccinated, show that the benefits of the vaccines outweigh the risks for children and teenagers.

The Stiko said that vaccinations are now also recommended because the committee expects that children are at a higher risk of catching COVID-19 during the current fourth wave of infections with the dominant and quickly spreading delta variant in Germany.

In the past months, the Stiko had been reluctant to recommend the vaccination for all youngsters, saying it did not have enough data, and had recommended the shots only for children and teenagers with chronic illnesses. However, earlier this month the German government had pushed to offer COVID-19 shots for all children above the age of 12 and some states had already sent out letters inviting them to local vaccination centers.

SYDNEY — Australia’s most populous state on Monday reported its worst day of the pandemic with 478 new COVID-19 infections and seven deaths.

Two of the dead had taken a single dose of a two-shot vaccine. The rest were unvaccinated, New South Wales Premier Gladys Berejiklian said.

Only 26% of Australians aged 16 and older had been fully vaccinated by Saturday. Australia has one of the slowest vaccine rollouts among wealthy countries, which is making the delta variant outbreak particularly dangerous.

The first shipment of one million Pfizer doses that Australia bought from Poland arrived in Sydney overnight.

Residents aged 16-to-39 in Sydney’s worst-effected suburbs will be given 530,000 of the new doses, the government said. This age group was responsible for most of the virus spread.

A government statement says curfew will be enforced from 10 p.m to 4 a.m from Monday until further notice.

Travel for essential services will be allowed during the curfew.

Authorities have also banned all public gatherings and wedding receptions.

Sri Lanka is witnessing a sharp rise in the number of COVID-19 patients with the doctors warning that medical facilities and morgues in the country are reaching their maximum capacities.

The government however has rejected repeated calls from doctors’ and other health sector associations to announce a full lockdown, because of an ailing economy.

Sunday’s order by the state’s highest court — which is entirely comprised of elected Republican justices — halts mask requirements that county leaders in Dallas and San Antonio put in place as new infections soar and students begin returning to school. Texas reported more than 11,500 patients hospitalized with the virus Sunday, the most since January.

The ruling is temporary pending a court hearing, though the timing of a final ruling is unclear. Officials in Houston and Austin, as well as public school districts, had also imposed mask mandates despite Abbott prohibiting local governments from reverting back to pandemic restrictions.

The COVID-19 death toll has started soaring again as the delta variant tears through the nation’s unvaccinated population and fills up hospitals with patients, many of whom are younger than patients typically were during earlier phases of the pandemic.

EASLEY, S.C. — COVID-19 cases have prompted the largest South Carolina school district already back open to return to virtual lessons as students in more than 60 other districts prepared to return to class.

Pickens County school officials made the decision at an emergency meeting Friday, after nine days of in-class learning for its 15,000-plus students, the Greenville News reported.

“We don’t know if it’s safe to continue as is,” and other districts should pay attention, district spokesman Darian Byrd said during the meeting.

He said four staffers and one student are hospitalized and 142 students have tested positive for COVID-19. Last school year’s peak was 85 students in January of this year, Byrd said.

The county’s remote schooling will last at least this week, with the first two days giving students a chance to pick up laptop-like Chromebooks, officials said.

Byrd said the district will announce next week’s plans by Thursday. Most other districts’ openings are scattered from Monday to Thursday.

School leaders have said students and teachers are welcome to wear masks, but they can’t mandate them even with another spike in COVID-19 cases. They also can’t require vaccines for students who are eligible for the shots.

WASHINGTON — The director of the National Institutes of Health says the U.S. could decide in the next couple weeks whether to offer coronavirus booster shots to Americans this fall.

Dr. Francis Collins tells “Fox News Sunday” that federal health officials are looking at the U.S. numbers “almost daily” but no decision has been made because cases so far still indicate that vaccinated people remain highly protected from COVID-19, including the delta variant.

He acknowledges, though, that there is concern that the effectiveness of the two-dose Pfizer and Moderna vaccines or the one-shot Johnson & Johnson regimen may wane “over months.” If so, Collins says that may necessitate a booster “maybe beginning first with health care providers, as well as people in nursing homes, and then gradually moving forward” with others, such as the elderly.

Collins says because the delta variant only started hitting hard in July, the “next couple of weeks” of case data will help the U.S. make a decision.

The ban will be effective from Sunday night and people are urged to avoid visiting public places as much as possible, according to a government statement.

Also, restaurants are now allowed to accommodate only 50 percent of their capacity and wedding receptions will be banned beginning Aug. 17.

Sri Lanka is witnessing an unprecedented surge of COVID-19 cases and deaths over the last two weeks. Doctors have warned that hospitals and morgues are reaching their maximum capacities. The government has ruled out an immediate lockdown because of the country’s ailing economy, despite repeated pleas from doctors.

BOSTON — The U.S. Centers for Disease Control and Prevention said Sunday that every county in the states of Connecticut and Massachusetts are the site of high or substantial transmission of the coronavirus.

The rise of transmission in the two states mirrors a nationwide and regional trend.

MOSCOW — Daily coronavirus deaths in Russia exceeded 800 for the fourth straight day on Sunday, with the authorities reporting 816 new fatalities.

The daily tally surpassed 800 for the first time in the pandemic on Thursday and has remained at that level ever since.

Russia faced a surge of infections last month that officials have blamed on the spread of the delta variant. New confirmed cases soared from around 9,000 a day in early June to 25,000 a day in mid-July.

New infections have since decreased slightly to about 21,000 daily this week, but the daily death toll has remained high.

Officials are working to boost vaccine uptake, which has remained lower in Russia than in many Western countries. As of Aug. 6, more than 39 million Russians — or 26.7% of the 146-million population — had received at least one dose, while over 30 million, or 20%, was said to be fully vaccinated.

Russia’s state coronavirus task force has reported over 6.6 million confirmed coronavirus cases in the pandemic and 170,499 deaths. However, reports by Russia’s state statistical service Rosstat that look at coronavirus-linked deaths retroactively have revealed a much higher number.

KAMPALA, Uganda — At a COVID-19 vaccination site in the Ugandan capital, Kampala, tempers flared among those waiting for scarce AstraZeneca jabs, with some accusing others of trying to jump the queue.

Nurses intervened, telling them the accused had been waiting since the previous day and averting violence in what has become a tense atmosphere as Ugandans jostle for vaccinations.

In the aftermath of a brutal wave of infections driven by the delta variant, many Ugandans seeking a first dose of vaccine are competing with hundreds of thousands who have waited months for a second dose. But the country now has only 285,000 shots donated by Norway.

The delta surge has touched off a vaccination rush across Africa that the slow trickle of donated doses can’t keep up with, compounding the continent’s vaccine disadvantage compared with the rest of the world.

The urgency to obtain a second dose across much of the world’s least vaccinated continent contrasts sharply with rich countries now beginning to authorize third doses.

Dr. Alfred Driwale, the top official with Uganda’s immunization program, said the small number of doses will do little to remedy the situation as the 5 million Ugandans eligible for vaccination — everyone from soldiers to health workers — scramble for shots under a first-come, first-serve system.

“You can’t make a policy when there is no certainty of supply,” Driwale said.

The first of the Pfizer vaccines left Warsaw via the United Arab Emirates and will arrive in Sydney over Sunday night, Morrison said.

Australia bought the vaccines after weeks of negotiations between Morrison and his Polish counterpart Mateusz Morawiecki. Morrison did not reveal the price.

“A key factor in being able to secure these doses from our Polish friends has been that we have had a significant outbreak in our largest city,” Morrison said.

Sydney has been in lockdown since June 26 due to an outbreak first detected 10 days earlier. Surrounding New South Wales state was entirely locked down from Saturday because of recent infections detected in regional towns and virus found in wastewater in the state’s north and west.

Residents aged 20-to-39 in Sydney’s worst-effected areas would be given 530,000 of the new doses. This age group was responsible for most of the virus spread, Morrison said.

The remaining doses would be shared with other Australian states and territories.

Only 25% of Australians aged 16 and older had been fully vaccinated by Friday.