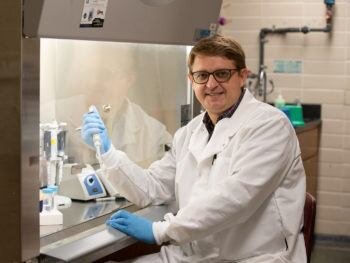 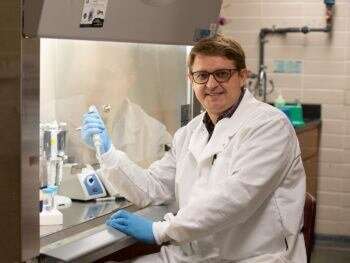 Research by two Texas A&M University scientists is focused on improving Lyme disease treatment outcomes by developing a test that’s both more accurate and more efficient than the current test for the infection.

Lyme disease, the fastest growing vector-borne illness in the U.S., according to the Bay Area Lyme Foundation, is challenging to diagnose and can only be treated in the early stages of infection. Once the infection spreads to the nervous and muscular systems, it is both harder to detect and less susceptible to antibiotics.

Dr. Artem Rogovskyy, an associate professor at the Texas A&M School of Veterinary Medicine & Biomedical Sciences (VMBS), and Dr. Dmitry Kurouski, an assistant professor in the Texas A&M Department of Biochemistry & Biophysics and the Department of Biomedical Engineering, are testing Raman spectroscopy, a technique used to detect vibrations at the molecular level, as a diagnostic tool for Lyme disease.

The results of Rogovskyy and Kurouski’s second paper on Raman spectroscopy as a diagnostic tool for Lyme disease demonstrate that blood samples from mice and humans infected with the Lyme pathogen were more accurately identified with the Raman spectroscopy test than with the two-tiered serology, the only diagnostic method currently approved to diagnose Lyme disease in humans in the United States.

“We’re trying to develop a better test that would be simple, inexpensive and accurate,” Rogovskyy said. “By accurate, I mean highly sensitive and highly specific at the same time.”

The increased accuracy of Raman spectroscopy testing could improve Lyme disease diagnostic practices for both humans and animals believed to have been in contact with the disease.

For animals, the new test would require a smaller sample that could easily be taken in the field away from a veterinary clinic or hospital, thus improving mobile veterinary practices.

Rogovskyy said the team is in the process of validating the test through additional studies, and if the test is validated, it could become an important tool for diagnosing Lyme disease worldwide, especially in more remote areas outside the U.S. where the disease is prevalent, by enabling testing outside of traditional medical and hospital settings.

The researchers’ collaborative efforts have received funding from the Bay Area Lyme Foundation, a nonprofit that collaborates with world-class scientists and institutions to accelerate medical breakthroughs for Lyme disease. They also received human blood samples from the Lyme Disease Biobank, a clinical specimen repository.