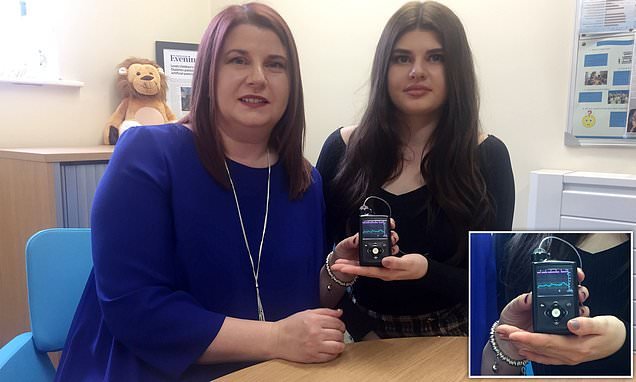 A 17-year-old with type 1 diabetes is the first person in the UK to have an electronic insulin pump fitted on the NHS.

Laura Dunion, from Oulton in Leeds, has a device which automatically injects insulin into her body when her blood sugar levels are high.

The Medtronic MiniMed 670G means Laura can forget about having to regularly inject herself with the hormone and can get on with her day-to-day life.

After being hooked up to the gadget in November – she is believed to be the first NHS patient to have it outside of clinical trials – Laura says it has changed her life. 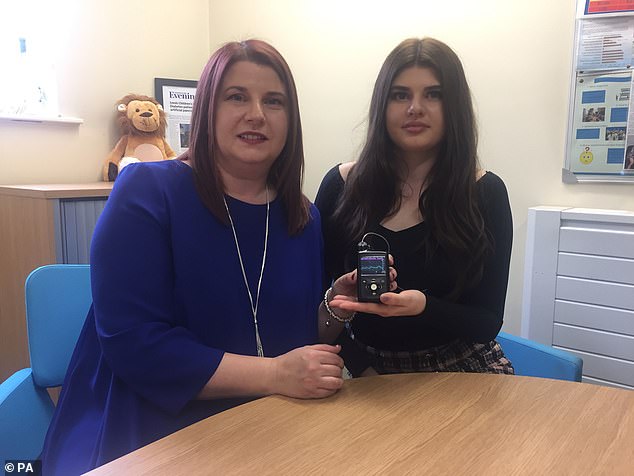 Laura Dunion, pictured with her mother, Lynn, said having the pancreas-like gadget installed has meant she no longer has to limit her activities out of fear of having to inject insulin

Laura was diagnosed with diabetes at the age of eight and was given the pump at Leeds Children’s Hospital last year.

She said the technology has since given her the confidence to volunteer, go on skiing holidays and start learning to drive.

‘Once I’d heard about it and what it did, I wanted it,’ she said.

‘It did take time getting used to it, because I had to take a big step backwards. You kind of had to let it do its job, you can’t do what you’ve always been used to doing.’

This can cause blood sugar, the body’s main source of energy, to spike dangerously high or drop dangerously low, and even lead to a coma.

For years diabetics have had to test their blood sugar, usually using a pin-prick blood test on their finger, and inject insulin if their sugar is too high.

But Laura’s new gadget uses a skin sensor to measure blood sugar and uses Bluetooth to signal when insulin is needed to a pump connected to her stomach.

The system automatically adapts throughout the day and should keep blood glucose stable, avoiding dangerous highs and lows without any effort from the patient. 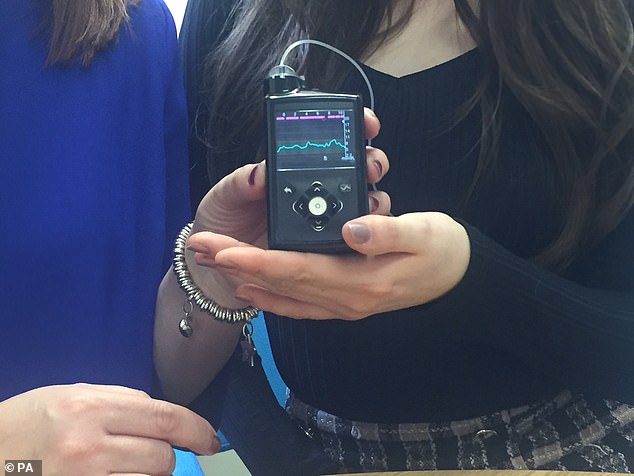 The Medtronic MiniMed 670G automatically tracks and adjusts Laura’s blood sugar levels, meaning she can forget about having to regularly inject herself with insulin and can get on with her day-to-day life

Laura said learning to stop doing everything herself has been a challenge.

‘I actually had to put my blood in and correct the insulin,’ she said. ‘Now I had to take a big step back and say “This is what it does, I can’t interfere with it”‘.’

She added: ‘[Diabetes has] never stopped me from doing anything but, if I have been doing something and my blood’s dropped, then I’ve had to stop doing what I’m doing to go and sort it out.

‘Now I can keep doing what I’m doing, because I know that my blood is not going to stop me.’

Currently studying childcare and development at college in Pontefract, West Yorkshire, Laura will go to Leeds Beckett University in September.

It will be the first time she has lived away from home and her mother, Lynn, feels reassured knowing her daughter will have the automatic pump as a safety net.

The 46-year-old said the ‘traumatic’ diabetes diagnosis meant she had to give Laura regular insulin injections when she was younger.

And she would sometimes wake every two hours during the night to monitor her blood sugar levels.

Ms Dunion said: ‘Laura went from being nearly nine years old, out playing in the street and being a bit more independent with her friends, to being a child that I couldn’t leave in a room on her own at all without worrying that she may have a low blood sugar and collapse.

‘Now, after nine years, I can sleep through the night without worrying about Laura’s blood.’

She had tried out an older version of the pump during a trip to France last summer, but that one was not able to reduce blood sugar if it was too high.

Because of this, Dr Campbell said, Laura was the right person to step forward and try the pump for the first time.

Dr Campbell added that the pump has been used by other patients since, and will continue to be used ‘as clinically appropriate’.

WHY IS IT IMPORTANT FOR DIABETES PATIENTS TO MEASURE THEIR GLUCOSE LEVELS?

Diabetes is a serious life-long condition that occurs when the amount of sugar in the blood is too high because the body can’t use it properly.

Patients have to regular monitor their glucose levels to prevent them from developing any potentially fatal complications.

Blood glucose levels should be between the ranges of 3.5–5.5mmol/L before meals and less than 8mmol/L, two hours after meals.

Hypoglycemia (when blood sugar drops below 4 mmol/L) can occasionally lead to patients falling into comas in severe cases.

However, it most often can be treated through eating or drinking 15-20g of fast acting carbohydrate, such 200ml of Lucozade Energy Original.

Sufferers can tell they are experiencing a hypo when they suddenly feel tired, have difficulty concentrating or feel dizzy.

Type 1 diabetes patients are more likely to experience a hypo, because of the medications they take, including insulin.

Hyperglycemia (when blood sugar is above 11.0 mmol/L two hours after a meal) can also have life-threatening complications.

It happens when the body either has too little insulin, seen in type 1, or it can’t use its supply properly, most often in type 2.

In the short-term, it can lead to conditions including ketoacidosis – which causes ketones to be released into the body.

If left untreated, hyperglycemia can lead to long-term complications, such as impotence and amputations of limbs.