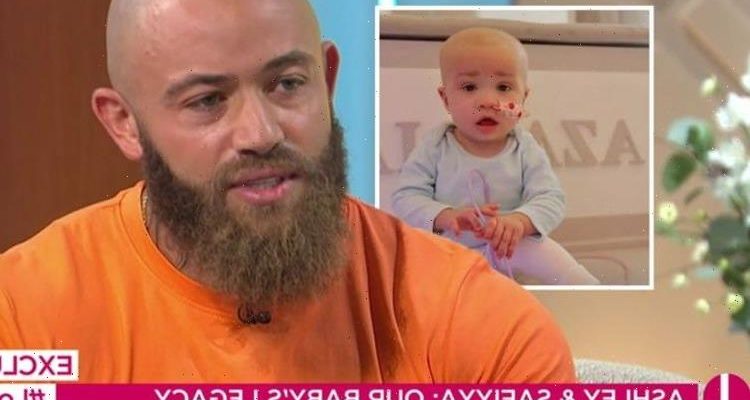 Ashley Cain and Safiyya Vorajee are on a mission to support other unwell children while honouring their late daughter Azaylia, who tragically died in April following her struggle with acute myeloid leukaemia. The couple spoke movingly about their personal motivations on ITV’s Lorraine. Mr Cain took the opportunity to list the warning signs of acute myeloid leukaemia to watch out for in your children.

Leukaemia is cancer of the white blood cells.

As Mr Cain explained, the “symptoms were things you would see in a normal baby”.

Speaking personally about initial warning sigs of their late daughter, Ms Safiyya said: “I believe that the early signs were her stomach getting hard, vomiting and bruising.”

According to Mr Cain, there was nothing really at that point to highlight the severity of what it actually was.

It could be signs as “typical” as constipation or colic, he warned.

Helping parent to understand this is central to the couple’s mission.

The push to raise awareness about the symptoms is one of the core aims of The Azaylia Foundation, which the couple have set up to help other parents understand how to cope with the disease and deal with the symptoms that come with it.

They have also promised carry on Azaylia’s legacy by supporting families racked by the traumatic illness.

As Mr Cain noted, these cancers are only rare because no one is talking about them and raising awareness.

He hopes that the couple’s foundation can plug this vital gap in knowledge, saving lives in the process.

How to respond to symptoms

Speak to a GP if you or your child have possible symptoms of AML.

“Although it’s highly unlikely that leukaemia is the cause, these symptoms should be investigated,” explains the NHS.

“If your GP thinks you may have leukaemia, they’ll arrange blood tests to check your blood cell production.”

The health body adds: “If the tests suggest there’s a problem, you’ll be urgently referred to a specialist in treating blood conditions (haematologist) for further tests and treatment.”

The main treatment for leukaemia will depend on the type of leukaemia you have, and how far your condition has progressed.

According to the NHS, chemotherapy is the main treatment for AML.

“It’s used to kill as many leukaemia cells in your body as possible and reduce the risk of the condition coming back (relapsing).”

In some cases, notes the health body, intensive chemotherapy and radiotherapy may be needed, in combination with a bone marrow or stem cell transplant.