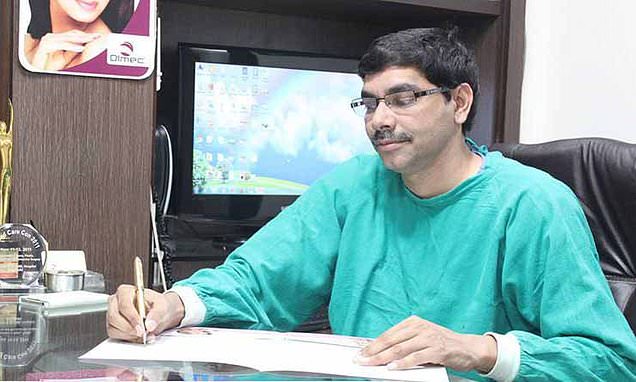 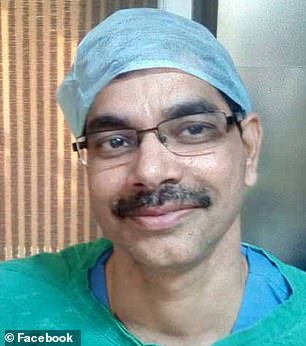 Dr Narendra Kaushik, who runs a gender reassignment clinic in New Delhi, will attempt to transplant a womb into a trans woman who was born a man

A surgeon in India will attempt to transplant a womb into a trans woman who was born a man — with the view to making them pregnant.

The risky procedure will involve taking the reproductive organs from a dead donor or a patient who has transitioned the other way and had theirs removed.

There has only been one documented case of a womb being inserted into a trans woman in the past — but she died from complications just months later.

Impregnating a trans woman would be an even bigger feat, and would require the use of IVF and a C-section, because they do not have a functioning vagina.

Dr Narendra Kaushik, who runs a gender reassignment clinic in New Delhi, has said he is ‘very, very optimistic’ he can make a success of the procedure.

‘Every transgender woman wants to be as female as possible — and that includes being a mother,’ he is quoted as saying in The Mirror.

‘The way towards this is with a uterine transplant, the same as a kidney or any other transplant. This is the future. We cannot predict exactly when this will happen but it will happen very soon.’

The surgeon has not revealed the recipient or given a timetable for the surgery, but he added: ‘We have our plans and we are very very optimistic about this.’ 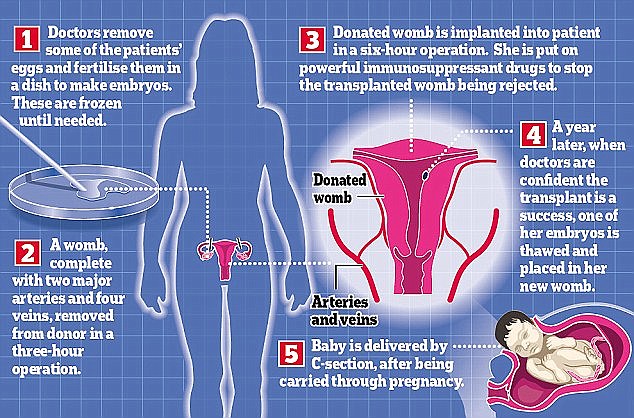 How babies are conceived in biological females who have a womb transplant. In theory, the principles should be the same for man, using the eggs of a donor. But it has never been attempted because there has yet to be a successful womb transplant to a trans woman 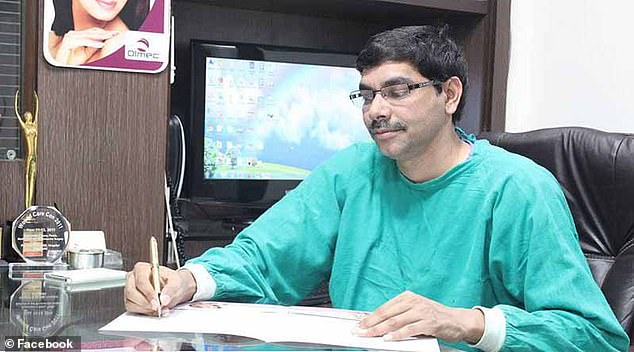 Dr Kaushik has said he is ‘very, very optimistic’ he can make a success of the procedure

Womb transplants cost around £50,000 and just one cycle of IVF treatment can cost upwards of £5,000.

Dr Kshuik’s clinic, Olmec, is at the centre of a booming industry in New Delhi that is seeing the city rival Bangkok as the sex change capital of the world.

He said around a fifth of his customers are from abroad, with many flying from the UK, where the pioneering procedure is free on the NHS but subject to waiting times.

WHY BIOLOGICAL MEN CAN’T GIVE BIRTH… YET

Only people who are born female can make eggs, which means it is not possible for a male-to-female trans woman to get pregnant naturally.

Scientists believe it is theoretically possible to impregnate a trans woman using IVF, when the eggs are fertilised outside the body and then inserted.

But it would require a healthy womb for the child to grow in, and transplant operations are years if not decades away from making that a reality.

There has only ever been one documented case of a womb being transplanted into a trans woman born male— but she died from complications just months later.

But only if they have not had a hysterectomy as part of their transition or have taken hormone-blocking drugs that stop them from producing eggs.

There are no definitive figures when it comes to how many transgender people have given birth worldwide, or in Britain.

Seventy-five people who identified as male gave birth in Australia in 2020, the most comparable country with data.

‘Many of our patients tell us that their sexual partners don’t even notice that they weren’t born with female sex organs,’ Dr Kaushik told the paper.

‘And that’s our aim, to make it so that they live as normal a life as possible as a woman. We aim for an aesthetic ideal’

But while gender reassignment surgery is well-established, the science behind womb transplants involving transgender people is still murky.

There have been more than 100 successful woman-to-woman uterus transplants since 2014 — and scientists are now able to impregnate recipients.

But there are far more hurdles to scale when it comes to inserting a female’s reproductive organs in a biological man.

As far as medical records show, the procedure has only been attempted once in history, when Danish trans artist Lili Elbe had the op in 1931.

The 48-year-old, one of the earliest known gender reassignment patients, had the operation in Germany with the hope of being able to have children with her fiance.

But she developed a post-surgery infection and died from cardiac arrest three months later without being able to conceive.

However, doctors say advances in medicine mean it’s now theoretically possible for a trans woman to give birth after the surgery.

The sticking point is that only people born female can make eggs, which means it is not possible for a woman to get pregnant naturally.

So doctors who attempt it will need to use IVF, when the eggs are fertilised outside the body and then inserted.

In 2017, Dr Paulson, president of the American Society for Reproductive Medicine, said: ‘There would be additional challenges, but I don’t see any obvious problem that would preclude it. I think it would be possible.’ 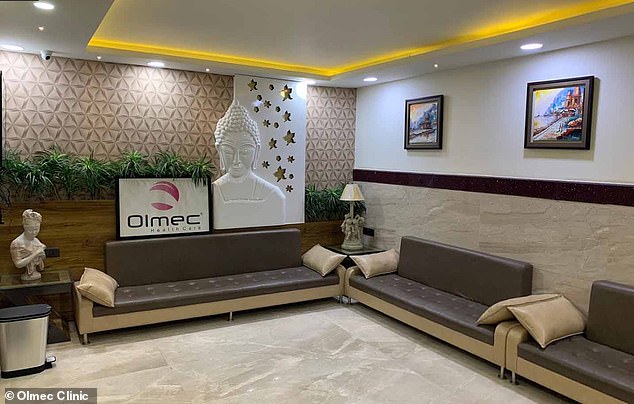 Dr Kshuik’s clinic, Olmec, is at the centre of a booming industry in New Dehli that is seeing the city rival Bangkok as the sex change capital of the world 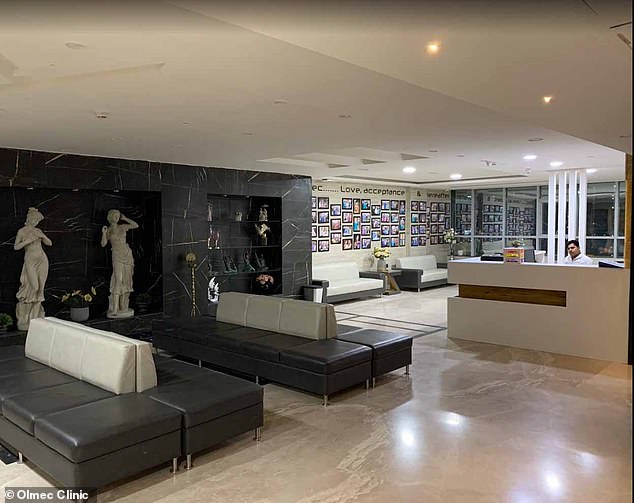 The report, from the LGBT Foundation, made the recommendation after surveying 121 trans Britons on their experience of pregnancy.

Another example of a gender-loaded term is ‘vaginal birth’, recommending ‘frontal’ or ‘lower birth’ instead.

The report said inclusive terms should be used across NHS services and people and national guidance should be introduced to ensure pregnant trans have the option of their preferred words.

‘It is not possible to guess the language someone might use to describe themselves based on how they look or sound, or who they are in a relationship with,’ the report reads.

The charity also says some trans and non-binary people would benefit from having a private space in hospitals to give birth, so that they are not made uncomfortable by seeing women.

It detailed the experience of one trans person, who said: ‘I didn’t have to go to a ward full of women after giving birth, I was actually provided with a private room for me and baby which was very helpful and accommodating for me and my gender identity.’

NHS services are currently in a ‘woke’ storm of de-gendering language surrounding women and pregnancy.

The report was commissioned by the Health & Wellbeing Alliance, a partnership between charities and the NHS, which is managed jointly by the Department of Health and Social Care and Office for Health Improvement and Disparities.

One problem doctors face is that the male pelvis would not allow a baby to pass through it because it is too narrow, so a man would have to give birth by caesarean section.

But there is room inside a man to hold a womb, Dr Paulson claimed.

He said hormones might have to be given to replicate the changes that go on while a woman is pregnant.

Once the uterus has been transplanted, an IVF embryo would have to be implanted.

Currently in the UK it would be illegal for an IVF clinic to create an embryo for the purpose of implanting it in a man under the Human Fertilisation and Embryology Act 2008.

Several transgender men – those who were born women and then switched – have already given birth in the UK.

But in those circumstances it was a case of retaining female reproductive organs after they transitioned, rather than implanting female organs into a male body.

Womb transplants, which cost £50,000 per operation, are still considered to be an experimental procedure.

Adverse side effects of immunosuppressants, drugs used to reduce risk of the body rejecting the organ, may also lead to other complications.

Womb transplants are predominantly performed with the use of a womb donated from a living woman, although modern organ-freezing techniques have made it possible for deceased donors’ uteri to be used too.

The first baby was born who had been carried to term in a womb transplanted from a dead donor in Cleveland, Ohio, in 2019.

The womb and blood vessels were removed from a 45-year-old woman – herself a mother – who had died of a stroke.

They were then implanted into a new mother, who was born without a womb of her own, in an almost 11-hour operation, and the blood vessels connected to her own.

The women then began to menstruate 37 days after the operation and then had regular periods until she became pregnant seven months later.

An embryo was implanted using eggs which had been taken from her ovaries before the womb transplant procedure and fertilised using IVF.

The baby grew healthily and was born after 35 weeks and three days by caesarean section.

During the caesarean section the woman’s implanted womb was also removed and both mother and baby recovered normally.